Latest News
2016-09-06
Editor
Home
Releases
Incubators for corruption: the Maliki government the most corrupt in the history of Iraq 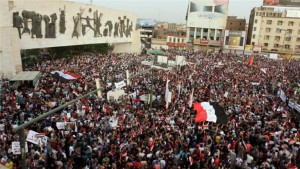 When  the issue of corruption is raised in Iraq, we mean here primarily financial and administrative corruption, which dates back to more than a decade ago , Which is the beginning of the US occupation of Iraq in 2003, where the trip of Iraq  was started with corruption, looting and theft that did not   keep anything from its bounty and wealth and  also the outcome of corruption was the spread of terrorism in Iraq  that formed  a threat to the region and the world.

Only in Iraq and there is none else, there are only two teams, the first is  a great mass of the Iraqi people who curse of corruption and  suffers  under  its impact, and a second team embraces corruption and defend   and fight  for  it  for personal interests.

The file  of corruption in Iraq did not stop to the level of   popular discontent but exceeded until it becomes a matter of irony to the whole world after the Iraqi court sentenced to one year in prison for a boy at the age of 12 years  for the theft of several boxes of tissue of  paper from the shop for sale, while the Iraqi judiciary’s inability   to  the trial of those who stole  billions of dollars and destroyed the country  that has the second largest oil reserves in the world.

In a previous article we mentioned that the biggest files of corruption and theft of public money,  and cover up  to the corrupt took place during the government of former Prime Minister Nuri al-Maliki, noting that the studies have estimated of what was  lost in his reign   could be up to a trillion dollars, through secret deals, smuggling money abroad, which confirmed by authoritative international reports.

A recent report  released from the International Center for Development Studies, based in London  revealed the disappearance of the $ 120 billion from the surplus of Iraqi financial  budgets  during the term of the prime minister Nuri al-Maliki .

The report pointed out that during the period between 2006 – 2014 , Iraq has made  a large financial surpluses  that could contribute to the reconstruction and turning it into a modern state, in terms of total  budgets in that period amounted to $ 700 billion mostly went into the pockets of the corrupt.

Maliki’s period as a prime minister, has seen a surge in oil prices  to reach record levels which had recorded more than US $ 115 a barrel, and  the Iraqi treasury achieved huge gains from oil revenues  which were disappeared  for the benefit of the Maliki government and its influential  figures, equivalent to oil revenues, which make up 95% of government revenues   and the   poverty, unemployment and terrorism were spread widely in all parts of Iraq, where  the  subsequent annual budgets suffered of huge deficits exhausted the pocket  of  citizen,  that he  has no right even   for the inquiry , and we can say that the Maliki government is deliberately fabricating crises and spread of terrorism to hide corruption and the theft of billions from the eyes of observers and the Iraqi people, who was   in the worst living conditions .

The report adds that the Prime Minister Haider al-Abadi received from his predecessor, al-Maliki  a treasury almost empty where there is no more than 700 million dollars, making Iraq in an extremely difficult financial situation, especially with the drop in oil prices and the decline in revenues and the rising cost of the war on Daesh.

The decline in central bank reserves

This decline continued until   reached this year 2016 to $ 43 billion, a decline of up to 45 billion dollars and the rate of decline is equivalent to $ 9 billion a year,  mostly go to buy  unproductive items.

The report pointed out that during January and February of 2016 Iraq’s financial revenues totaled 3.269 billion dollars, while the central bank sold 5.821 billion dollars to import goods, where it was to cover the difference of 2.552 billion dollars from the reserve.

A document on the House of Representatives shows the size of revenues (January, February) 2016

As the central bank  transformed during the period from 2012 -2015 $ 6.5 billion under the  trading checks ,and later on  it was shown   that it comes from a fictitious company and to the calculation of  the  companies  that were shown later on  to be fake  as well.

the  statement of central bank  pointed out last year, after the Finance Committee in the Iraqi Parliament published official documents confirming the regular smuggling of  billions of dollars, through the auction of foreign currency during the years of 2006-2014, when Nuri al-Maliki was prime minister.

The report of International Center for Studies warned from the process of continued wastage  in central bank reserves, especially as oil prices remain at low levels and the increasing burden on the state because it means the rise of the  inflation of the budget deficit to the levels  that may exceed what is declared and which could  arrive in the next year to 32%.

Reports indicate that since the establishment of the Central Bank auction to sell the dollar to banks and  banking corporations in 2004, central bank sales amounted to more than $ 312 billion since its inception, valued at 1180 dinars to the dollar, it has transformed 80% of these funds out of Iraq, while 20 percent have entered into the market.

In spite of attempts by Prime Minister Haider al-Abadi of curbing corruption in Iraq, but the beneficiaries of this phenomenon are trying to disrupt it, and the impact on the work of independent bodies through the influence of some parties or militias.

The report called for Prime Minister Haider al-Abadi to accelerate  the detection of senior corrupt before starting the next election.

the International Center for Studies noted that the Iraq dossier has considerable international attention, especially since corruption has caused the spread of terrorism in Iraq which formed  a threat to the region and the world.

The report indicated that the success of al-Abadi in the fight against corruption is no  less important than  the liberation of Mosul and it would be honored  by popular  and international support that enable him to  carry out his programs in the reconstruction and services, and building  state institutions.

We refer here to the investigative inquiry conducted, by “Fairfax Media” and “Havengtin Post” and was published in April 2016, revealed about  “thousands of documents” from the site of the company “Aunanwil” owned by an Iranian family, based in the Principality of Monaco  that the  champions of these operations  senior officials and  ministers in the reign the government of Nouri al-Maliki.

It is scheduled to start the investigation of the financial files of corruption  based on   the memorandum of understanding signed by the Iraqi government with the United Nations. UN investigators will work, to help the Iraqi government to reveal the fate of the $ 361 billion which is missing from the budgets of Iraq between 2004 m – 2014.

The situation in Iraq is terrifying and  the Iraqi government is trying to cope with the current financial paralysis through the use of external and domestic  borrowing , but the question arises Is the Iraqi government will be able  to calling   the  corrupt  to account ?  Will it be able to cope with any popular anger as a result of its inability to fight corruption?

Talk about corruption in Iraq is unlike any country in the world, and no  mind can  imagine it  ,that  a bunch of thieves who wear uniforms  to work  to drain the state treasury of all its assets, to bring Iraq back to centuries of poverty, ignorance and unemployment, while the followers of  the enemies of Iraq  are insisting  to steal  its money and  bounty and smuggled it   abroad to the  service of  regional agendas that do not want good for  Iraq and its people, but all evil, however, the al-Maliki government since the (2006-2014)  will remain the worst  in  the  ancient and contemporary history of Iraq , and  the story will be written about  government looted the entire country and left its people and threw  them  into the arms of  their enemies , Iraq is today in the forefront of countries that pursue to get the international loans, grants and perhaps  to save what can be saved.