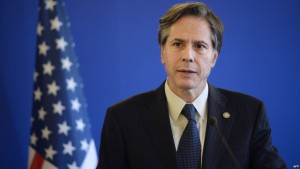 In the framework of readiness of US President Barack Obama’s administration of the Battle of Mosul against al Daesh, and in the framework of unannounced visits in advance also of officials of diplomats and military personnel in Iraq after the emergence of al Daesh in June 2014 , US Vice Foreign Minister, Anthony Blinken arrived last Tuesday  to Iraq to meet with Iraqi officials, and try to discuss the political, economic, humanitarian and security developments and activate bilateral relations under the strategic framework Agreement. Accompanying Antony Blinken, Brett Mkorik special envoy of the US President, and Director of the National Security Council for Iraq, Joseph Harris, and Under Secretary of State for Near Eastern Affairs Joseph Banngton.  Anthony Blinken is visiting today, Thursday Iraq’s Kurdistan region, to meet with Massoud Barzani, president of Iraq’s territory Kordstnan and a number of senior officials in the local government to continue talks on efforts by the Peshmerga forces in the fight against Daesh and coordination in order to continue to support it.

The  intevsive move of  US diplomat   toward Baghdad reveals    in conjunction with the ongoing preparations for the launch of the decisive phase of the battle of restoring the city of Mosul, Nineveh province ,   the center of the organization Daesh,   for the interest of the United States in that battle and its quest to take the lead in view of its importance in determining the fate of Iraq and  drawing  the map of influence inside it in the post-regulation Daesh.

Among other things, the aim of the United States of  the visit of its diplomat   to  Iraq is to confirm its support to the Government of Haider al-Abadi and support for the package of reforms carried out by him , and also its  support for the file of national reconciliation in Iraq. The visit of the American diplomatic delegation comes at a time when Haider al-Abadi lacks internal support even from the national alliance, as he  has failed so far in practice in the legislation of any  of  package of the reforms which had been announced during this year . It is the Obama administration’s interest to maintain the cohesion of the existing regime in Iraq to facilitate the upcoming battle against Daesh Mosul.

At the press conference held by Anthony Blinken at the US embassy in Baghdad last Wednesday, it was announced that US and Iraqi forces, in partnership with the “international coalition” forces, managed to regain 50% of the areas that were held by the terrorist organization “Daesh” . and  Anthony Blinken said : “Two years ago , both Baghdad and Erbil were in danger of Daesh, and now, thanks to the international coalition partnership with the Iraqi forces,  the restoration of 50% of the land from the control of Daesh was carried out ,” pointing out that the number of displaced people who have returned to their homes reached one million people. He pointed out that the United States will provide $ 181 million for the humanitarian effort in Iraq (did not specify when); noting that the amount of  humanitarian aid  provided by the administration of President Barack Obama to Baghdad since the emergence of al Daesh  in 2014 is  one billion US dollars. He predicted that the moving away will be more than one million people  from Mosul and surrounding areas at the start of the upcoming battle to restore the city of Mosul from “Daesh.” He added: “Daesh  is defeated and  efforts are concentrated around Mosul campaign,” it is likely that the elements of this terrorist organization to turn  to a “sleeper cells and some groups  after the liberation of all the Iraqi lands from its control.”

This statement of the US official correspond to a large extent with most American political analyzes that see that the organization  Daesh  will continue   to  the “inspiration” of terrorism as an idea that  have deadly implications . Perhaps in order to ensure the continuation of the intellectual arsenal that is built despite the loss of its territory, noting that the   organization released long comments and booklets in religious guidance to coincide with its exposure to its major defeats over the past few months. So, the idea of waiting ​​succession   will continue to inspire the attacks even if there was not any succession  . Daesh organization will not disappear without its strongholds in Raqqa in Syria, and Mosul in Iraq, but will be divided to terrorist branches and  territory .  pockets of  Daesh will be able to reorganize its ranks in unstable areas in the region, as we have already shown that in Libya, or give rise problems in places with s symbolic impact, such as Turkey and Saudi Arabia. In addition ,these branches may promote for themselves as  they are more  a fundamentalist than the  organization Daesh which retains the territory, in order to gain popularity among the terrorists.

However, the organization of  Daesh is different  from the groups  affiliate to the  organization of  «Qaeda» for its ability to inspire individual attacks, a unique promotion strategy of its kind, a strategy devised by creating a set of written rules, it is not just about violence but about the more mundane aspects  to identify the exclusive organization   of Islam . while the adopted strategy for the organization «Daesh»  to build a state of regional caliphate will be stumbled, but the emerging strategy will focus more on how  to  promote for its image and its administration. At the same time, the  terrorist groups branching from the terrorist  organization  Daesh will increase its efforts  to mobilize its  followers in the West and the Middle East in order to inspire them to carry out attacks abroad against selected sectarian and Western targets. The leadership of the group would give its blessing  to any activity carried out according to the broader  guideline  for  the organization «Daesh» , which is “to survive and expand.”  It is worth noting that the steadfastness  and its expansion  of branches  of the organization Daesh  linked to  members who had “become personal extremists ” in the West, will promote the story of  fighting on behalf of the ultimate  ideals  to the caliphate of the organization «Daesh» in order to create a ”  caliphate  again” at any site that offers the best combination of regional instability and symbolic spirit  – such as Syria or perhaps even Turkey and / or Saudi Arabia under the right conditions.   according to the American analysis that is consistent or in harmony with the official US statements , the humanity in post-modernism on a date with , after the elimination of al Daesh in Iraq and Syria, a new organizion

Saleem al-Jubouri – , head of the Iraqi Council of Representatives ,   said  according to a statement issued after his meeting with Anthony Blinken:  “The planning for the post – Daesh is no less important than the process of elimination of this organization in Iraq , calling for the need to address the reasons that led to the emergence of the organization. He stressed the need for the immediate  action of    what is called by operations of intellectual , psychological   and   social  rehabilitation , to prevent the exposure to such as “disaster”   of the organization  Daesh “inflicted on Iraq and the Iraqis great harm .  He added  that the main concern today is to prepare and ready for  the decisive  battle of Nineveh , indicating  to the need for “investment  of  high morale and momentum of recent victories that have been achieved , not to be given an opportunity for terrorism to be emboldened again .” Saleem al – Jubouri said that ” the  political stability is gurrantee   for the next phase, which requires more joint effort and  fast real treatment to the  crises that will support the process of reform , which anticipated by the people and is what we are working for it and work hard in the process.”

The  political analysts and military experts involved in the Iraqi issue saw that    the visit of US diplomatic delegation   comes within the context of the final preparations for the decisive battle of Mosul  on the grounds that President Barack Obama’s administration has succeeded in becoming the  main decision maker in the war in Iraq, taking advantage of the weakness of the government of Prime Minister Haider al-Abadi and frequent conflicts between the ruling parties in the country. In spite of the merits of that view, but it is so difficult to underestimate the regional role of the Battle of Mosul, as President Barack Obama’s administration is aware of the existence of fierce competitors on the role in that battle, and seek to fill any vacuum  that can form  away for them   to interfere  to maximize their gains in Iraq by participating in the final elimination  to the organization  Daesh there. While the Iranian regime works by trying to insist on the participation of the  popular crowd , ally of it ,  in the battle of Mosul to ensure field control  on  the province of Nineveh neighboring to Syria , which allows direct communication with the regime of Bashar Assad ally of Tehran, the Turkish government is working on the other hand through the proxies of the Sunni politicians to ensure presence in Mosul  to achieve historic legacy in the city, and to ensure observation and  the control of the Kurdish movements and control what they can do of  an expansive steps out of their region in northern Iraq. The question suggested in this context and from which is derived   two other questions: What awaits Iraq in the post-Daesh  ?  Are there more fragmentation and cluttering ?  Or that  the lesson  of  Daesh scourges  is  sufficient to correct the political process in Iraq and on  its  track?