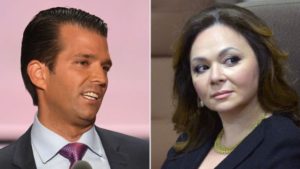 President Donald Trump personally dictated the statement his son gave on his talks with a Russian lawyer during the election campaign, US media report.
It said Donald Trump Jr and the lawyer had mostly discussed the adoption of Russian children in June 2016.
Mr Trump Jr later revealed he had agreed to meet her after being told he could receive damaging material on Hillary Clinton.
President Trump has repeatedly denied any collusion with Russia.
The Senate, House of Representatives and a special counsel are all investigating alleged Russian interference in the presidential election which took the form of attempts to undermine Mrs Clinton – a claim denied by the Kremlin.
The reports about Mr Trump Jr’s statement came in the midst of further turmoil at the White House.
White House communications director Anthony Scaramucci was fired on Monday after fewer than 10 days in the post.
The former Wall Street financier had drawn criticism after calling a reporter to give a profanity-laced tirade against his colleagues.
Legal concerns
Reports that President Trump had himself dictated the statement his son issued about the meeting with lawyer Natalia Veselnitskaya first emerged in the Washington Post. It cited multiple sources.
ABC News later quoted “two senior-level sources” as confirming this claim.
President Trump’s advisers initially agreed that Mr Trump Jr would release a statement that “couldn’t be repudiated later if the full details emerged”, the Post says.
But it says that decision was reversed as President Trump was flying home from the G20 summit in Germany on 8 July.
In the statement, Mr Trump Jr said the meeting had “primarily discussed a programme about the adoption of Russian children”, not campaign issues.
The statement was issued to the New York Times, as it was preparing its story on the meeting.

Mr Trump Jr later acknowledged that he had agreed to meet after being told Kremlin-linked information about Mrs Clinton would be offered during the talks.
He also released the email exchange that brought about the meeting.
Neither President Trump nor his son have commented on the latest media reports.
The Washington Post says some of the president’s advisers fear the extent of the president’s intervention could place him and some of his inner circle in legal jeopardy.
Did Donald Trump Jr break the law?
Four explosive lines in Trump Jr emails
Key players in Trump Jr meeting scandal
What do the emails reveal?
Mr Trump Jr received an email from an intermediary, British music publicist Rob Goldstone, promising documents from Russia that would incriminate Mrs Clinton.
At that time, his father was the presumptive Republican nominee and heading towards an election fight against his Democratic rival.
The meeting was reportedly arranged by Russian businessman Aras Agalarov and his son Emin, a pop star who was managed for a time by Mr Goldstone.
One email from Mr Goldstone said the information they had been promised was “obviously very high-level and sensitive information but is part of Russia and its government’s support for Mr Trump”.

Mr Trump Jr’s response to it was: “If it’s what you say I love it.”
Mr Trump Jr, his brother-in-law Jared Kushner and then campaign chairman Paul Manafort met Russian lawyer Natalia Veselnitskaya at Trump Tower in New York.
It became apparent, Mr Trump Jr later said, that Ms Veselnitskaya wanted to discuss a suspended programme for Americans to adopt Russian children.
Why was this British guy emailing Trump Jr?
Trump Jr’s email chain: Full text
Who said what about Russia in Trump’s team?
What did Trump Jr say about the meeting?
Donald Trump Jr told Fox News’ Sean Hannity in July that he did not tell his father about last year’s meeting: “It was such a nothing. There was nothing to tell.
“I mean, I wouldn’t have even remembered it until you started scouring through this stuff. It was literally just a wasted 20 minutes, which was a shame.”
In retrospect, he would have done things a little differently, Mr Trump Jr told Fox News, but he defended his actions.
But the meeting went nowhere, he said, and it was apparent Mrs Clinton was not the subject.
He could not vouch for the information he was sent, he said.
“Someone sent me an email. I can’t help what someone sends me. I read it, I responded accordingly, and if there was something interesting there, I think that’s pretty common.”