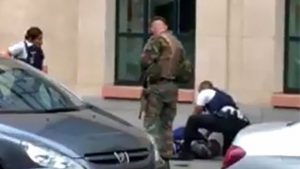 A man has been shot dead after attacking soldiers with a machete in Brussels, in what prosecutors are treating as a terror attack.
The Somali attacker, aged 30, died in hospital. One of the soldiers suffered a hand injury.
Photographs show the street cordoned off with police and troops in the area.
Soldiers have become a familiar sight on the streets of the Belgian capital since terror attacks which killed more than 30 people last year.
The attack took place on Boulevard Emile Jacqmain in the centre of the city.
Belgium’s federal prosecutor’s office said the attacker had not been “known for terrorist activities” but had shouted “Allahu Akbar” (“God is greatest” in Arabic) during the assault.

Witness Ryan MacDonald‏ wrote on Twitter that he had heard the sound of a gunshot before seeing a “heavy police presence outside”.
Another witness said he had heard “two loud bangs and a load of sirens”.
Report
End of Twitter post by @Its_Nathan_Yo
Earlier reports spoke of two soldiers being injured in Friday’s attack but only one was confirmed to have been wounded.
The presence of soldiers on the streets of Brussels is part of a large-scale security operation designed to reassure the public in the wake of terrorist attacks in the city in March 2016 in which 32 people were killed.
Brussels marks bomb attacks anniversary
In June, a soldier shot dead a man who had tried to bomb a Brussels train station.
He was identified as a 36-year-old Moroccan national, named by local media as Oussama Zariouh.