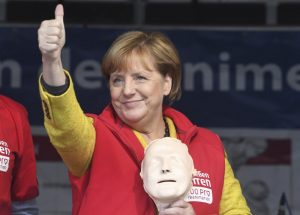 BERLIN (AP) — Chancellor Angela Merkel is widely expected to win a fourth term in office as Germans go to the polls — and this election is also likely to see the farthest right-wing party in 60 years, the anti-migrant Alternative for Germany, win seats in parliament.

That’s helped keep her conservative bloc well atop the polls ahead of Sunday’s election over the center-left Social Democrats of challenger Martin Schulz.

The latest polls have Merkel’s bloc at 34 to 37 percent support, the Social Democrats with 21 to 22 percent and the Alternative for Germany, or AfD, with 10 to 13 percent support.

Congress rocked by consequential battles that will shape Biden’s presidency

U.S. Policy Toward Arab States, Palestinians, and Israel: Ideas and Approaches for the Biden Administration

European Counterterrorism in the COVID Era: Views from Europol