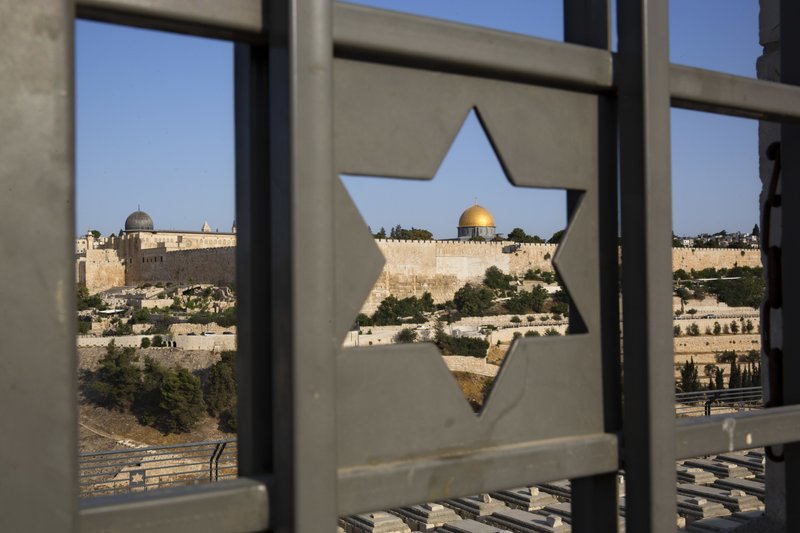 WASHINGTON (AP) — President Donald Trump will recognize Jerusalem as Israel’s capital on Wednesday despite intense Arab, Muslim and European opposition to a move that would upend decades of U.S. policy and risk potentially violent protests.

Trump will instruct the State Department to begin the multi-year process of moving the American embassy from Tel Aviv to the holy city, U.S. officials said Tuesday. It remains unclear, however, when he might take that physical step, which is required by U.S. law but has been waived on national security grounds for more than two decades

The officials said numerous logistical and security details, as well as site determination and construction, will need to be finalized first. Because of those issues, the embassy is not likely to move for at least 3 or 4 years, presuming there is no future change in U.S. policy.

To that end, the officials said Trump delay the embassy move by signing a waiver, which is required by U.S. law every six months. He will continue to sign the waiver until preparations for the embassy move are complete.

The officials said recognition of Jerusalem as Israel’s capital will be an acknowledgement of “historical and current reality” rather than a political statement and said the city’s physical and political borders will not be compromised. They noted that almost all of Israel’s government agencies and parliament are in Jerusalem, rather than Tel Aviv, where the U.S. and other countries maintain embassies.

The U.S. officials spoke to reporters on condition of anonymity Tuesday because they were not authorized to publicly preview Trump’s Wednesday announcement. Their comments mirrored those of officials who spoke on the issue last week.

The declaration of Jerusalem as Israel’s capital is a rhetorical volley that could have its own dangerous consequences. The United States has never endorsed the Jewish state’s claim of sovereignty over any part of Jerusalem and has insisted its status be resolved through Israeli-Palestinian negotiation.

The mere consideration of Trump changing the status quo sparked a renewed U.S. security warning on Tuesday. America’s consulate in Jerusalem ordered U.S. personnel and their families to avoid visiting Jerusalem’s Old City or the West Bank, and urged American citizens in general to avoid places with increased police or military presence.

Trump, as a presidential candidate, repeatedly promised to move the U.S. embassy. However, U.S. leaders have routinely and unceremoniously delayed such a move since President Bill Clinton signed a law in 1995 stipulating that the United States must relocate its diplomatic presence to Jerusalem unless the commander in chief issues a waiver on national security grounds.

Key national security advisers — including Secretary of State Rex Tillerson and Defense Secretary Jim Mattis — have urged caution, according to the officials, who said Trump has been receptive to some of their concerns.

The concerns are real: Trump’s recognition of Jerusalem as Israel’s capital could be viewed as America discarding its longstanding neutrality and siding with Israel at a time when the president’s son-in-law, Jared Kushner, has been trying to midwife a new peace process into existence. Trump, too, has spoken of his desire for a “deal of the century” that would end Israeli-Palestinian conflict.

U.S. officials, along with an outside adviser to the administration, said they expected a broad statement from Trump about Jerusalem’s status as the “capital of Israel.” The president isn’t planning to use the phrase “undivided capital,” according to the officials. Such terminology is favored by Israeli officials, including Prime Minister Benjamin Netanyahu, and would imply Israel’s sovereignty over east Jerusalem, which the Palestinians seek for their own future capital.

Jerusalem includes the holiest ground in Judaism. But it’s also home to Islam’s third-holiest shrine and major Christian sites, and forms the combustible center of the Israeli-Arab conflict. Any perceived harm to Muslim claims to the city has triggered volatile protests in the past, both in the Holy Land and across the Muslim world.

Within the Trump administration, officials on Tuesday fielded a flood of warnings from allied governments.

In his calls to Palestinian President Mahmoud Abbas and Jordan’s King Abdullah II, Trump delivered what appeared to be identical messages of intent. Both leaders warned Trump that moving the embassy would threaten Mideast peace efforts and security and stability in the Middle East and the world, according to statements from their offices. The statements didn’t speak to Trump’s plans for recognizing Jerusalem as Israel’s capital.

“This would mean they decided, on their own, to distance themselves from efforts to make peace,” Khaldi told The Associated Press in perhaps the most sharply worded reaction by a Palestinian official. He said such recognition would lead the Palestinians to eliminate contacts with the United States.