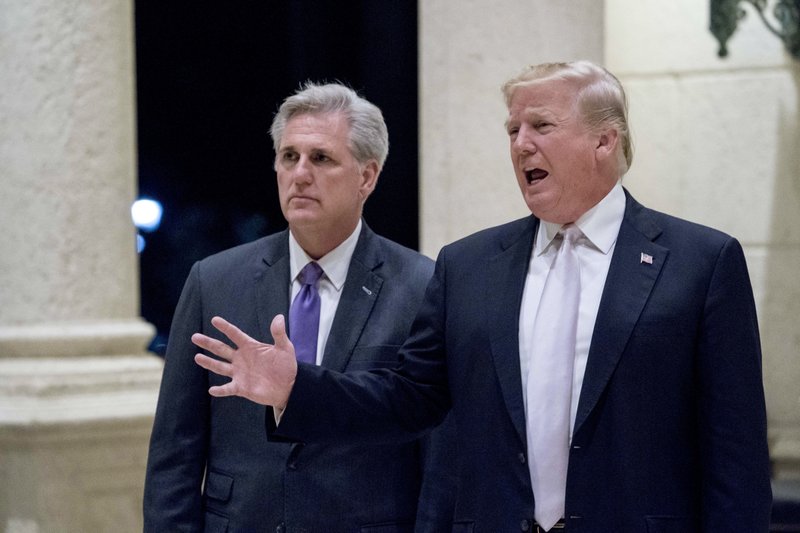 WEST PALM BEACH, Fla. (AP) — President Donald Trump is defending himself anew against accusations that he is racist, this time after recent disparaging comments about Haiti and African nations.

“No, No. I’m not a racist,” Trump said Sunday, after reporters asked him to respond to those who think he is. “I am the least racist person you have ever interviewed. That I can tell you.”

Trump also denied making the statements attributed to him, but avoided the details of what he did or did not say.

“Did you see what various senators in the room said about my comments?” he asked, referring to lawmakers who were meeting with him in the Oval Office on Thursday when Trump is said to have made the comments. “They weren’t made.”

Trump stands accused of using “shithole” to describe African countries during an immigration meeting with a bipartisan group of six senators. The president, in the meeting, also questioned the need to admit more Haitians to the U.S., according to people who were briefed on the conversation but were not authorized to describe the meeting publicly.

Trump said in the meeting that he would prefer immigrants from countries like Norway instead.

The White House has not denied that Trump said “shithole” though Trump has already pushed back on some depictions of the meeting.

A confidant of Trump’s told The Associated Press that the president spent Thursday evening calling friends and outside advisers to judge their reaction to his remarks. Trump wasn’t apologetic and denied he was racist, instead blaming the media for distorting his meaning, said the confidant, who wasn’t authorized to disclose a private conversation and spoke on condition of anonymity.

Sen. Dick Durbin of Illinois, the only Democrat at Thursday’s meeting, said Trump had indeed said what he was reported to have said. Durbin said the remarks were “vile, hate-filled and clearly racial in their content.” He said Trump used the most vulgar term “more than once.”

Trump commented as Durbin was presenting details of a compromise immigration plan that included providing $1.6 billion for a first installment of the president’s long-sought border wall.

Trump took particular issue with the idea that people who’d fled to the U.S. after disasters hit their homes in places such as El Salvador, Guatemala and Haiti would be allowed to stay as part of the deal, according to the people, who spoke on condition of anonymity because they weren’t authorized to publicly describe the discussion.
When it came to talk of extending protections for Haitians, Durbin said Trump replied, “We don’t need more Haitians.’”

“He said, ‘Put me down for wanting more Europeans to come to this country. Why don’t we get more people from Norway?’” Durbin said.

Republican Sens. David Perdue of Georgia and Tom Cotton of Arkansas, who also attended the meeting, initially said in a statement Friday that they “do not recall the president saying these comments specifically.” On Sunday, they backtracked and challenged other senators’ descriptions of the remarks.

Perdue described as a “gross misrepresentation” reports that Trump used the vulgarity. He said Durbin and Republican Sen. Lindsey Graham of South Carolina were mistaken in indicating that was the case. Graham also attended the meeting.

“I am telling you that he did not use that word. And I’m telling you it’s a gross misrepresentation,” Perdue said on ABC’s “This Week.”

Cotton told CBS’ “Face the Nation” that he “didn’t hear” the word used — “and I was sitting no further away from Donald Trump than Dick Durbin was.”

Trump insisted in a tweet on Friday that he “never said anything derogatory about Haitians other than Haiti is, obviously, a very poor and troubled country. Never said ‘take them out.’ Made up by Dems.” Trump wrote, “I have a wonderful relationship with Haitians. Probably should record future meetings – unfortunately, no trust!”

Trump has defended himself against accusations of being a racist on numerous occasions, including during his insistence that President Barack Obama was not American-born and after he opened his presidential campaign in 2015 by describing Mexicans as rapists and drug peddlers.

Word of Trump’s comments threatened to upend delicate negotiations over resolving the status of hundreds of thousands of immigrants who were brought to the country illegally as children. Trump announced last year that he will end the Obama-era Deferred Action for Childhood Arrivals program, or DACA, unless lawmakers come up with a solution by March. The program shielded these immigrants, often referred to as “Dreamers,” from deportation and granted them permits to work.

Some Democrats have threatened to vote against legislation to extend government funding, which expires on Friday, unless protections for the Dreamers are included.

“Honestly I don’t think the Democrats want to make a deal,” Trump said. “I think they talk about DACA, but they don’t want to help the DACA people.”

Trump said Democrats aren’t for securing the border or stopping the flow of drugs, but are for taking money away from the military.

“We have a lot of sticking points but they’re all Democrat sticking points,” he said. “We are ready, willing and able to make a deal, but they don’t want to.”

Potential US sanctions on Iraq

The exit of American forces from Iraq, the losers and the winners

The American Withdrawal from Iraq: A Kurdish Vision