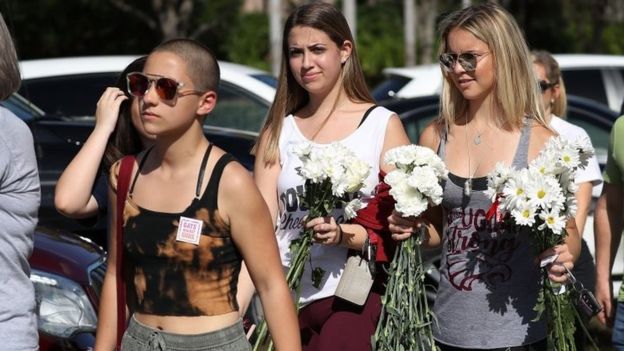 The US National Rifle Association (NRA) has said it does not support any gun ban following a shooting in a Florida school that left 17 people dead.

Since the 14 February attack on the Marjory Stoneman Douglas High School the NRA has become a target of a campaign for tougher gun laws.

On Sunday, some students returned to the school for the first time.

Accompanied by their parents, they were back for what the authorities in Parkland described as “orientation”. A variety of support services were available at the campus.

Students are preparing to return full-time to their classrooms on Wednesday.

‘Spike in school threats’ after Florida shooting
Florida survivor: ‘I’m not an actor’
What did the NRA say?
Dana Loesch, a spokeswoman for the influential gun lobby group, told ABC News: “The NRA doesn’t back any ban.”

She said the massacres like that in Florida were not caused by the NRA.

Ms Loesch suggested there had been errors by local law enforcement agencies and a lack of action by politicians.

Florida officials revealed after the shooting that an armed officer assigned to the school had stood outside the building during the shooting and not intervened.

What about Mr Trump’s comments on gun controls?
Speaking earlier this week, the president said arming teachers could prevent school shootings like that in Florida.

Mr Trump also proposed raising the age limit for buying certain types of guns from 18 to 21.

The suspect accused of carrying out the shooting in Florida is former student Nikolas Cruz, 19.

Mr Trump also backed a ban on modifications that enable semi-automatic rifles to shoot more rounds per minute. These are known as bump stocks.

And the president called for improved background checks on gun buyers.

‘Arm me with books’ – the teachers saying no to guns
After Florida, some owners give up guns
What do students and parents want?
On Wednesday, President Trump listened to pleas for gun reform from about 40 students, teachers and families in the executive mansion’s state dining room.

Hundreds of teenagers from the Washington DC suburbs rallied outside at the time – some voicing support for arming teachers.

Andrew Pollack, whose daughter Meadow died in last week’s attack – the second-deadliest shooting at a US public school – said: “We, as a country, failed our children.”

“It should’ve been one school shooting and we should’ve fixed it,” he went on to say. “And I’m pissed. It’s my daughter I’m not going to see again.”

Mark Barden – whose son Daniel was killed in the 2012 shooting at Sandy Hook Elementary School in Connecticut – said more guns was not the answer.

“Schoolteachers have more than enough responsibilities right now, than to have to have the awesome responsibility of lethal force to take a life,” he said.

A ban on some types of weapons, advocated for by many students, is unpalatable for supporters of the Second Amendment to the US Constitution – which governs the right to bear arms.