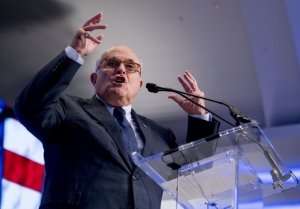 WASHINGTON (AP) — President Donald Trump’s legal team wants a briefing on the classified information shared with lawmakers about the origins of the FBI investigation into Russia’s meddling in the 2016 presidential election and may take it to the Justice Department as part of an effort to scuttle the ongoing special counsel probe.

Rudy Giuliani, one of Trump’s attorneys, told The Associated Press on Friday that the White House hopes to get a readout of the information next week, particularly about the use of a longtime government informant who approached members of Trump’s campaign in a possible bid to glean intelligence on Russian efforts to sway the election. Trump has made unproven claims of FBI misconduct and political bias and has denounced the asset as “a spy.”

“If the spying was inappropriate, that means we may have an entirely illegitimate investigation,” Giuliani said of special counsel Robert Mueller’s probe. He then invoked the material compiled by former FBI Director James Comey before he was fired.

“Coupled with Comey’s illegally leaked memos, this means the whole thing was a mistake and should never have happened,” Giuliani said. “We’d urge the Justice Department to re-evaluate, to acknowledge they made a mistake. It’s a waste of $20 million of the taxpayers’ money. The whole thing is already a waste of money.”

Comey has said he had the authority as a private citizen to ask a friend to share details from one of his memos with the news media, and has said he did nothing wrong. The Justice Department official who would be the one to receive any complaints from Giuliani would presumably be Deputy Attorney General Rod Rosenstein, who appointed Mueller last year in the wake of Comey’s firing and was present for Thursday’s briefings.

Suggesting that the probe was launched on the backs of inappropriately obtained information was Giuliani’s latest effort to discredit the investigation by painting it as a purely political event. The FBI began a counterintelligence investigation in July 2016 to determine if Trump campaign associates were coordinating with Russia to tip the election. The investigation was opened after the hacking of Democratic emails that intelligence officials later formally attributed to Russia.

The two meetings held Thursday were sought by Trump’s GOP allies in Congress and arranged by the White House, as the president has tried to sow suspicions about the legitimacy of the FBI investigation. Trump and his allies have focused on the use of the informant.

“What motivated putting him in? What sort of information were they seeking from him? What did they get?” Giuliani asked Friday. “They clearly did not get incriminating information or we’d have found out about it by now. And why did they hide it for so long? There’s a big concealment that went on here for over a year since the president said he had been surveilled.”

So far, 19 people, including Trump’s former campaign chairman and former national security adviser, have been charged in Mueller’s investigation. Three former Trump aides have pleaded guilty and are cooperating with the investigation.

Democrats emerged from the meetings saying they saw no evidence to support Republican allegations that the FBI acted inappropriately. Republican Sen. Lindsey Graham of South Carolina was not in the meetings but, in a radio interview Friday, broke with the president to say a “confidential informant is not a spy,” though he cautioned about investigations into campaigns.

Initially offered only to Republicans, the briefings were the latest piece of stagecraft meant to publicize and bolster the allegations. But they also highlighted the degree to which the president and his allies have used the levers of the federal government — in this case, intelligence agencies — to aid in Trump’s personal and political defense.

The presence of a White House lawyer, Emmet Flood, and White House Chief of Staff John Kelly at the outset of the briefings raised immediate alarms from Democrats, who said they were concerned officials could use information from the meetings to the president’s legal advantage. They also said it was inappropriate for White House officials to attend any part of a meeting about a criminal investigation that directly concerns the president and his campaign. Some also questioned whether the presence of Flood and Kelly violated Justice Department policy meant to limit contacts with the White House to specific circumstances.

Director of National Intelligence Dan Coats said Flood and Kelly “were there to relay the President’s desire for as much openness as possible under the law; and both left — as planned_before the substantive portion of the meeting began.” Giuliani said it would be appropriate for Trump to be briefed about the findings.

“He’s not the subject or target of that investigation. He should know what is discussed,” said Giuliani, the former mayor of New York City. “Moreover, I assume President Obama knew about it. And if Obama knew about it, why can’t Trump?”

Questions would likely be raised about the appropriateness of sharing the information with the White House in light of the ongoing probe into Trump’s campaign.

It was unclear how much information was given to lawmakers. According to a U.S. official familiar with the broader of the two meetings, the briefers did not reveal the name of the informant. They brought documents to Capitol Hill but did not share them, and made several remarks about the importance of protecting intelligence sources and methods. The person declined to be identified because the briefing was classified.

The president intensified his attacks on the probe this week, calling it “spygate” and tweeting Thursday that it was “Starting to look like one of the biggest political scandals in U.S. history.” Trump told one ally this week that he wanted “to brand” the informant a “spy,” believing the more nefarious term would resonate more in the media and with the public.

It remained unclear what, if any, spying was done. The White House provided no evidence to support Trump’s claim that President Barack Obama’s administration was trying to spy on his 2016 campaign for political reasons. House Intelligence Committee Chairman Devin Nunes, an ardent Trump supporter, originally demanded the information on an FBI source in the Russia investigation.

Giuliani said the president’s legal team would wait to see a report out of the briefings before making a decision as to whether Trump would sit for an interview with Mueller’s investigators. He previously had said that a decision would not be made about an interview until after Trump’s summit with North Korean leader Kim Jong Un, a meeting the president canceled Thursday but the White House is open to reviving.

“We’ll see about the future of the summit before we definitely make a decision about a timetable,” Giuliani said.