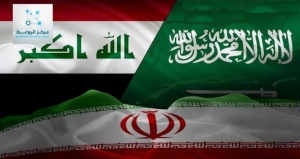 Researcher Shatha Khalil *
Iraq seeks to promote balanced relations and regional calm with Iran and Saudi Arabia because of the constant tension between them, as poor relations affect the security of the region in general and the Iraqi economy in particular.
Iraq’s position at the Gulf emergency summit called for by KSA and hosted by Mecca, where Iraqi President Barham Salih said that Iran is a neighboring country and that its security should be maintained and that Iraq will do its utmost to open the door to constructive dialogue, renounce violence and move towards a calm aimed at stabilizing the region that has suffered the scourge of war and destruction.
This explains Iraq’s keenness to ensure balanced relations for Iraq with neighboring countries, as confirmed by the Iraqi government.

The faltering Iraqi economy:
The Iraqi economy needs more time to re-structure it, and for development and growth. Iraq is still the country of oil and wealth. It needs Iranian energy to operate its power plants, especially during the summer, because it depends on energy imports from Iran.
Iraq has received a Saudi commitment to connect the electricity between the two countries to secure all Iraq’s electricity needs in a record period of six months and work to secure generators as well.
With the progress of US sanctions on Iran, Iraq is looking for stable and successful investment and economic alternatives away from the sanctions crisis and its negative effects on the Iraqi economy as Iraq imports about 28 million m 3 of natural gas from Iran to operate power plants and directly buys about 1,300 MW of Iranian electricity.
He also looks forward to a distinguished Saudi role in supporting its faltering economy and, more importantly at the level of trade cooperation is the opening of the commercial Arar crossing, as observers see the volume of trade will increase significantly.
Iraq received pledges from more than 25 countries and multilateral organizations to provide loans, grants and investment projects worth 30 billion dollars m noting that the contributions of Iraq’s neighboring countries were particularly encouraging where Saudi Arabia offered $ 1.5 billion under a ten-year period for the reconstruction and development of the country, includes a range of government reforms and private sector investments.

US sanctions on Iran:
Since the US sanctions against Iran have come into effect, with its second resolution, the United States has given Iraq a plan within a specified period of time to find an alternative to dealing with the dollar in energy with Iran in the event that Iran wants to continue to benefit from the sanctions.
The US Treasury Department has confirmed that the plan will be presented to US agencies to ensure that the National Security Council, the State Department, the Treasury, the intelligence community and energy management agree on the same goal of not leaking dollars to Iran through Iraq.
However, Iraq can not meet its long-term reconstruction needs through humanitarian aid, cash grants and international financial aid alone, but rather it must reform its economy and develop it through private investment, thereby laying the foundation for job creation for self-sufficiency and economic development, and return to play its vital role in the region.

Saudi investments in Iraq:
Iraq has been suffering since 2003 from a severe crisis in the production of electric power. The Saudi-Iraqi rapprochement in various fields of investment and trade has doubled in a short period, especially in terms of energy , one of the most striking developments in the world, noting that the international attention is no longer focused on attempts to reduce Iranian influence, despite the importance of the file, but looks at the stable Saudi-Iraqi relations and investment as a safety valve for the oil market and the region as a whole, which reflects on Iraq and Saudi Arabia positively, as the two countries are prominent members of the Organization of Petroleum Exporting Countries (OPEC).

In the same context, the Ministry of Electricity of Iraq confirmed, that the production of electricity will rise to a record level at 18 thousand MW compared to 15 thousand currently in the summer of 2019, after the introduction of Saudi solutions to increase production.
As several understandings were made, such as the electric connection and the implementation of investments in energy between the two countries noting that Iraq needs more than 23,000 megawatts of electricity to meet the needs of the population and institutions without interruption. According to the figures announced by the ministry, the country’s production in August reached 15,700 megawatts.

Iraq is suffering from a severe shortage of power supplies despite successive governments have spent about $ 50 billion on the sector since 2003.
The two sides also agreed that the Saudi factories and companies operating in the field of electric power will cooperate with the Iraqi side to cover the local demand of electrical equipment and products.
That the volume of trade exchange between Iraq and Saudi Arabia during the past ten years reached about six billion dollars, and perhaps more because of the influx of Saudi companies to Iraq rapidly. The service sector accounted for the largest share of 57%, 38% for the industrial sector and 5% for agriculture.
In the context of Saudi investments in Iraq, economic projects are increasing, including the construction of a sports stadium in Baghdad, and its intention to open three consulates in Iraq in the coming period.
Iraq seeks to strengthen cooperation in five key sectors: the banking sector, energy, infrastructure, social development and security, especially after Saudi Arabia understood the Iraqi aspirations and started its investment projects in Iraq, fully aware of the daily deficiencies in the lives of Iraqis, therefore it aimed to invest in the development of all previous sectors.

In the agricultural sector, Saudi Arabia will implement large investment projects on more than one million hectares of agricultural land in the Anbar and Samawah desert adjacent to the Saudi border for the development of agriculture and livestock breeding, similar to the Saudi pasture experience; thus, it will provide employment opportunities for young people and meets the demand on food .

Adil Abdul Mahdi, the Iraqi Prime Minister, who works with economic thought and awareness, stressed the need to develop the economy and work on the development of relations to serve the national interest of the country, as it needs more effort and joint work to reach economic stability, where many agreements have been signed in various fields between the two countries.

Iraqi and Saudi officials and specialists pointed out that the Saudi investments in Iraq are driven to a large extent by several common bonds between the two brotherly countries, and that Iraq today is not Iraq in 2006, as there is a very high awareness by the Iraqi government and the people of the need to find a way out of the link with Iran, where it turned into a heavy stone dragging it tothe bottom, explaining that the Kingdom is not aimed at achieving economic profits at the expense of the Iraqis, but the advancement of Iraq and its people and return it to the Arab lap, unlike Iranian investments, which international experts described as a front for the financing of terrorism, and seek to implicate Iraq, and prevent it from harmony with the international community, and as a means used by the Iranian regime to exploit Iraq’s wealth and absorb it to the fullest extent possible under sanctions against Iran.
Stressing that the US sanctions on Iran, gives Iraq an opportunity to free itself from Iranian hegemony over its economy, and would establish a promising era based on investment partnerships of mutual benefit regionally and internationally, and the internal benefit of Iraq, and in order to serve its development objectives and stability and security and its development scientifically and socially not only in the level of investment , thus to end a unilateral benefit era of Iranian investment in Iraq, which has always been in the interest of Iran alone.