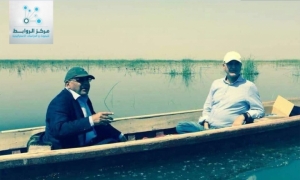 The presidency and ministry institutions in post-2003 Iraq have never had the same vision on national issues and regional and international interactions as they do now. This congruence is attributed to Barham Saleh, President of the Republic and Adel Abdul Mahdi, Prime Minister. It is patriotism and sense of responsibility that led them to take over affairs of Iraq despite the exceptional circumstance it is going through, and despite the victory of Iraq on the organization of the terrorist ISIS , the danger of it and militias still exists, in addition Iraq is in a fragile military, security and economic situation , Iraq is between the hammer of Iran and its allies and anvil of USA and its allies.
The experiences of governance in Iraq in the post-2003 period have always been based on the conviction that in order for Iraq to exit from its crises, it needs the men of the state to run its course, thus Iraq today is run by two statesmen, Barham Saleh and Adel Abdul Mahd i, thus to get Iraq ahead, decisive decisions and positions are needed. This requires internal and external support. 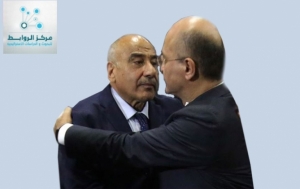 On the internal support, the national forces and the Iraqi parliament have to stand by these two national men. Their presence in the presidency and the prime minister is an historic opportunity for Iraq to exit from its crisis, they must provide all the support to them for the success of their experience in governance and not to achieve personal gains because it means nothing neither for the president of Iraq nor Prime Minister , but to restore the prestige for Iraqi state, and this is the goal of every Iraqi national keen to restore the cohesion of Iraqi society internally and to restore the status of the Iraqi state externally.
On the regional level, Iran should always remember that Iraq and its people are the inheritors of a genuine human civilization. The past is deeply rooted with the present and the future. From this approach, we do not add any thing new, when we say that Iran should respect Iraq’s sovereignty and treated with good neighborliness which is one of the principles governing the relations between States, and accordingly, Iraq may shape the relationship of an alliance of an economic and military nature with Iran based on equality rather than on the principle of dependency and this is rejected by Iraq. Iraq rejects definitively the saying “Tehran decides and Baghdad implement,” because that does not fit with its status as a pivotal state in the middle east , on the other hand, Iraq will not accept to be a path to harm the security and safety of the Iranian state.

The Kingdom of Saudi Arabia, the pivotal state in the Arab world and the Middle East for its religious status, the “Custodian of the Two Holy Mosques” and the geostrategic country , should support Barham Saleh and Adel Abdul Mahdi, and not stand too much against Iraq’s objection to the final communiqué of the Arab summit , noting the ties that are linking Iraq to Saudi Arabia make it beyond this objection and does not build on it a political position that may harm the interests of the two countries in the future. There is no doubt that the relations of the countries do not fully match over the regional and international issues, the difference is a natural feature in those relations and any differences can be solved by dialogue and understanding of other state conditions.
And because Iraq is keen on its positive relations with Saudi Arabia, according to special information received by the Rawabet Center provides that before the Islamic Summit, Barham Saleh met with Prince Mohammed bin Salman, the Crown Prince of Saudi Arabia, to block any tension in bilateral relations between the two pivotal countries in the Middle East.

From the experience of Iraq after 2003, we say that the role of the Kingdom of Saudi Arabia in Iraq is very necessary. Iraq needs its Arab depth, so if this depth is in Riyadh, so should not repeat the mistake in 2003 and 2010, meaning not to return to the policy of exclusion because it does not serve the interests of Saudi Arabia or Iraq.
Turkey also has to support Barham Saleh, President of the Republic and Adel Abdul Mahdi, a strong Iraq is also in its interest, and may be one of the most benefiting from Iraq and the most affected with a weak Iraq, Iraq takes in to consideration the security concerns of the Turkish state coming from the PKK, as Iraq refuses to turn mountain of Sinjar to the mountains of Qandil , but Turkey should be well aware that its support for a small political group of little effect in the Iraqi society does not serve its interests in Iraq, but it must coordinate its dialogue channels with the symbols of the Iraqi state in addressing disputed issues such as the issue of water, and it should not miss the address .
Internationally, the United States of America is the official sponsor of the Iraqi political system in the post-2003, and this requires from it to be one of the most keen ones on the security and stability and prosperity of Iraq, so Washington should not involve Baghdad in its military and economic war with Tehran, and to exclude Iraq from its sanctions imposed on Iran, and contribute to the exit of Iraq from crisis and not deepen it , through support for Barham Saleh and Adel Abdul Mahdi, including that Washington sends an official invitation to the President and the Prime Minister to visit the White House that ” Saleh and Adel Abdel Mahdi “to be able to explain Iraq’s complex situation thoroughly and sincerely.
Iraq is seen by the international community as being occupied by Iran, which is not exactly like this. No one denies the Iranian influence in Iraq. No one denies the role played by Haj Agha Qasim Soleimani , but what we would say is that when Iraq speak ,the others were kept silent, “as if “there is a bird on their heads,” but today Iraq is wounded and this wound needs recovery and Washington and Tehran must realize that the duration of his recovery is temporary and will not be prolonged, a word to the wise is enough .

The bottom line is that the experience of Iraq with the terrorist organization of the ISIS is that not in the interest of Iraq first and the region second that Iraq to be a unstable state , stability of it is the stability of the region and vice versa, and to achieve that countries which are keen for its stability before the stability of Iraq, must provide all forms of support for the historic opportunity in Iraq represented by Barham Saleh, President of the Republic of Iraq, and Adel Abdul Mahdi, Prime Minister.