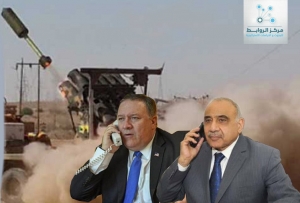 With the escalation of tension in the region and in the context of the proxy war, it seems that Iran has chosen Iraq as a preferred arena to fight its conflict with the United States of America, and there are clear signs of this, two weeks ago a missile was fired at the US Embassy in Baghdad from 52nd Street near the University of Mustansiriya. And then one of the armed factions allied to Iran handed a threatening message to the Speaker of the Iraqi Council of Representatives to be sent to the concerned officials in the US administration. At dawn last Friday, the Balad base was targeted with four rockets. According to special information obtained by the Rawabet Center, three of these missiles landed at the center of the base while the fourth missile did not explode. Also fired from the Yathrib district in the province of Salah al-Din Katyusha rockets towards the base of “Balad.”
The group that fired the rockets may think it targets US interests in Iraq, it does not know that the base of “Balad” is an Iraqi military base and not an American, in this base there are IF 16 aircraft belonging to the powerful Iraqi Air Force, and the headquarters of American company Lockheed Martin, the largest military industry in the world and take the base of “Balad” as a HQ in Iraq. It also provides appropriate services to Iraqi military and technician experts in the military field. It also has American security companies and logistical support for the multinational “supply and transport” and oversees the” Balad” base, according to an Iraqi military commander.
The proxy war carried out by Iran’s allies against US interests in the region, “Abha airport, oil tankers” in Iraq and its allies continues, according to special information received by the Rawabet Center, on Saturday morning, at 7:00 am, a shell landed on the military side of Baghdad International Airport. The relevant side in the provision of logistical support and through the travel of some States of the Alliance. According to special information received by the Rawabet Center, Iraqi forces were able to discover a number of missile bases in the vicinity of Taji area between Baghdad and Samarra.
And to find out about these dangerious military and security developments in Iraq, and according to information obtained by the Rawabet Center,at 2 pm on Saturday, Matthew Tyler, the US ambassador to Iraq, contacted the Iraqi Prime Minister Adel Abdul Mahdi, the ambassador expressed his concern about these developments and its dangerous consequences for the US presence in the region and Iraq. . The Secretary of State for the US Foreign Affairs contacted Adel Abdul Mahdi, where the Foreign Minister expressed his full confidence to Adil Abdul Mahdi, in contrast, the Iraqi Prime Minister understood the concern of members of the US administration for these developments, and the Prime Minister stressed that he will initiate an immediate investigation to find out against the background of these attacks. And they tackled common issues and arrangements for the visit of Iraqi Prime Minister Adil Abdul Mahdi to the White House on July 15.
In a remarkable development in the context of the proxy war, according to special information received by the Rawabet Center, the United States renewed for the third time and without conditions extension of the exemption of Iraq for 120 days – for the first time extending the exemption for more than 90 days – of the sanctions imposed on Iran allows it the import of electricity and gas on which they rely so much, especially during the hot summer in the country. Exemption is vital for Iraq as temperatures this year are much higher than seasonal rates , increasing electricity consumption, fearing renewed protests against the lack of public services starting early in the summer.
Based on all of the above, the policy maker in Iran must realize that Iraq is its economic lung by which it breathes. thus the military and security actions done by its allies against American interests in Iraq have caused great embarrassment to Iraqi Prime Minister Adil Abdul Mahdi, and on the other hand it damages largely the Iraqi economy , the missiles fired on the base of “Balad” would have hit Iraqi fighters, even if they are American-made, but owned by the Iraqi Air Force, and the destruction of these fighters cost the Iraqi treasury a lot of money to buy another ones or re-maintenance , why is Iran’s policy maker tampering through its allies in Iraq’s security and economy ?.
Iran’s political decision-maker must realize that it is not for his country’s interest to stop the Iraqi economic lung, recovery of Iran’s economy, but rather its interest in continuing to work, but if that lung stops working, any artificial respiration of the Iranian economy will not compensate for that natural lung, it is in Iran’s interest to support Adil Abdul Mahdi, the Prime Minister of Iraq, and respects his choices and administration for Iraq’s internal and external affairs. It is like the last chance to advance Iraq, serving the Iraqi people internally in the first place as well as neighboring countries and the world as being an Iraqi national politician open for all serving his Iraqi people and because the last words of Marja formed a strong support for him .
But even more dangerous is the fact that a hardliner wing in Iran will not remain idle at a time when the Iranian economy is in a state of suffocation, and that suffocation will certainly damage military foreign activities, so its only option is military escalation against US interests in the region and Iraq, but the United States, with its vast military experience gained through the Agency’s wars against the Vietnamese in the 1960s and 1970s, has the experience of not being drawn into a war or military confrontation with which Iran’s allies have a prominent role, so US prefers the strict economic pressure option against Iran.

Iran and its hardliner wing must realize that the actions of their allies in Iraq and in the region, such as targeting oil tankers, reinforce the gains of the American position internationally, because the big powers refuse to affect the security of oil tankers and reject any threat to international navigation, and such acts will show Iran as a state that threatens the International peace and security.
Based on what is mentioned above, Iraq seeks with all the strength and wisdom exercised by Iraq’s Prime Minister Adil Abdul Mahdi to spare his country the scourge of the American-Iranian conflict. He is keen on his high patriotism that Iraq should not be the arena for conflict; he does not accept to be as a tool to attack or stifle Iran. , and does not accept that Iran will use its allies to attack American targets in Iraq.

The policy maker of Iran has to review its policy towards Iraq , perhaps this review has a positive outcome , and upon the review , he has to remember that it is not in Iran’s interest to use Iraq as a pressure card against Washington in the context of their regional environment. The question arises in this context: Why does Iran insist if it views Iraq as an ally on its loss? Iraq is a key pillar in supporting the Iranian economy while Iran provides financial and logistical support to its allies in the region. What is the wisdom of the loss of Iraq?!