Recently, the wise man wonders what are these negative acts that have taken place in Iraq, actions that are not accepted by everyone who is keen on the country’s reputation and stability. And it is not accepted by anyone who is sticking to the soil of his homeland and the sacrifices of its sons and grandfathers , and what is sacred of the blood of the martyrs whose blood has watered the soil of Iraq to preserve it and protect its independence.

What to say about the target of the “Balad” air base by missiles, and about the target by a missile attack on the headquarters of major international oil companies, including the US giant ExxonMobil in the city of Basra, and what about those who stormed the Bahraini embassy in Baghdad. That all these previous acts and the like are out of the law, which must be respected by all officials and citizens. And that these actions harm the reputation and stability of Iraq.

The democratic state, which Prime Minister Adel Abdul Mahdi seeks to consolidate its pillars, is based only on the principle of the rule of law, which means that the rulers and the governed in the state are subjected to the rules of the law in which the acts of the various state authorities and their citizens conform to existing legal rules. And the Diwani Order (decree)No. 237 issued by the Office of Prime Minister Adel Abdel-Mahdi on the popular crowd , is to confirm the importance of the rule of law and the criteria of patriotism and belonging to it and that the rule of law is a collective responsibility of the state and the citizen. Among the decisions of the “Diwani Order” is the closure of all the headquarters of any faction of the popular crowd and the armed factions have an option either to join the armed forces or engaging in political activity according to the laws of the parties. “The presence of any faction acting secretly or publicly outside these instructions” is forbidden. The prime minister authorized the factions until July 31 to comply with the new resolution. 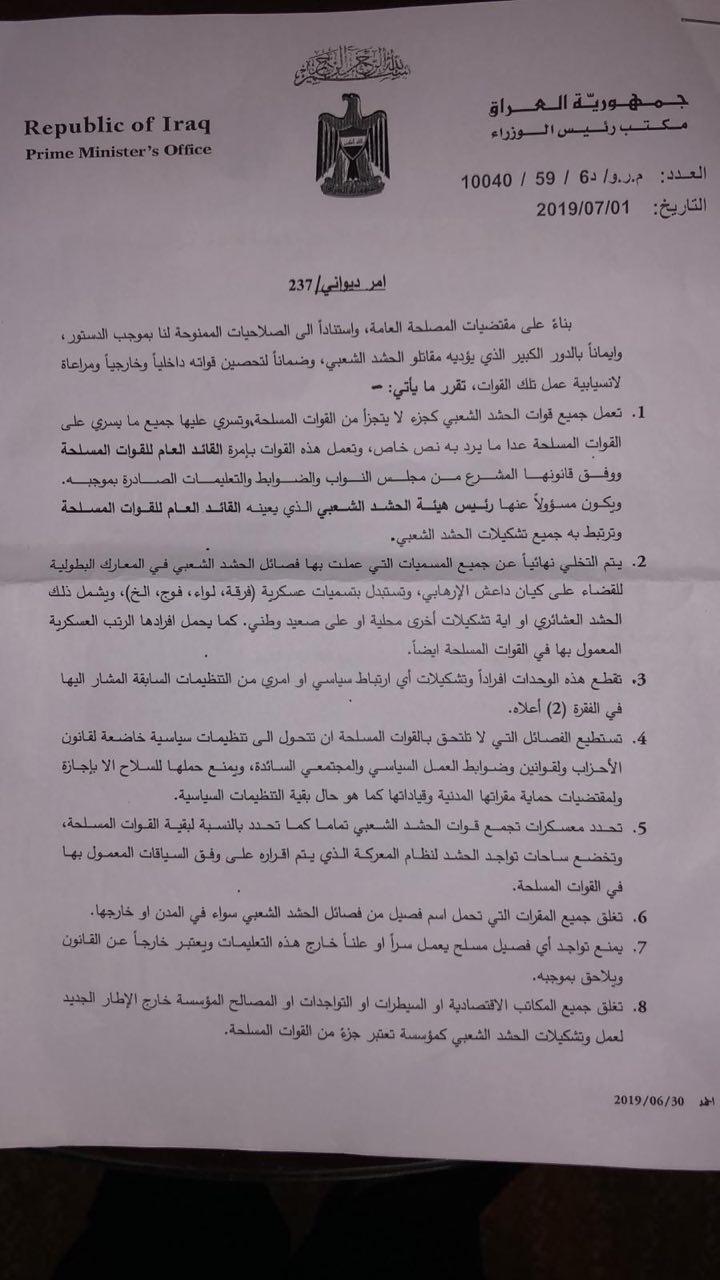 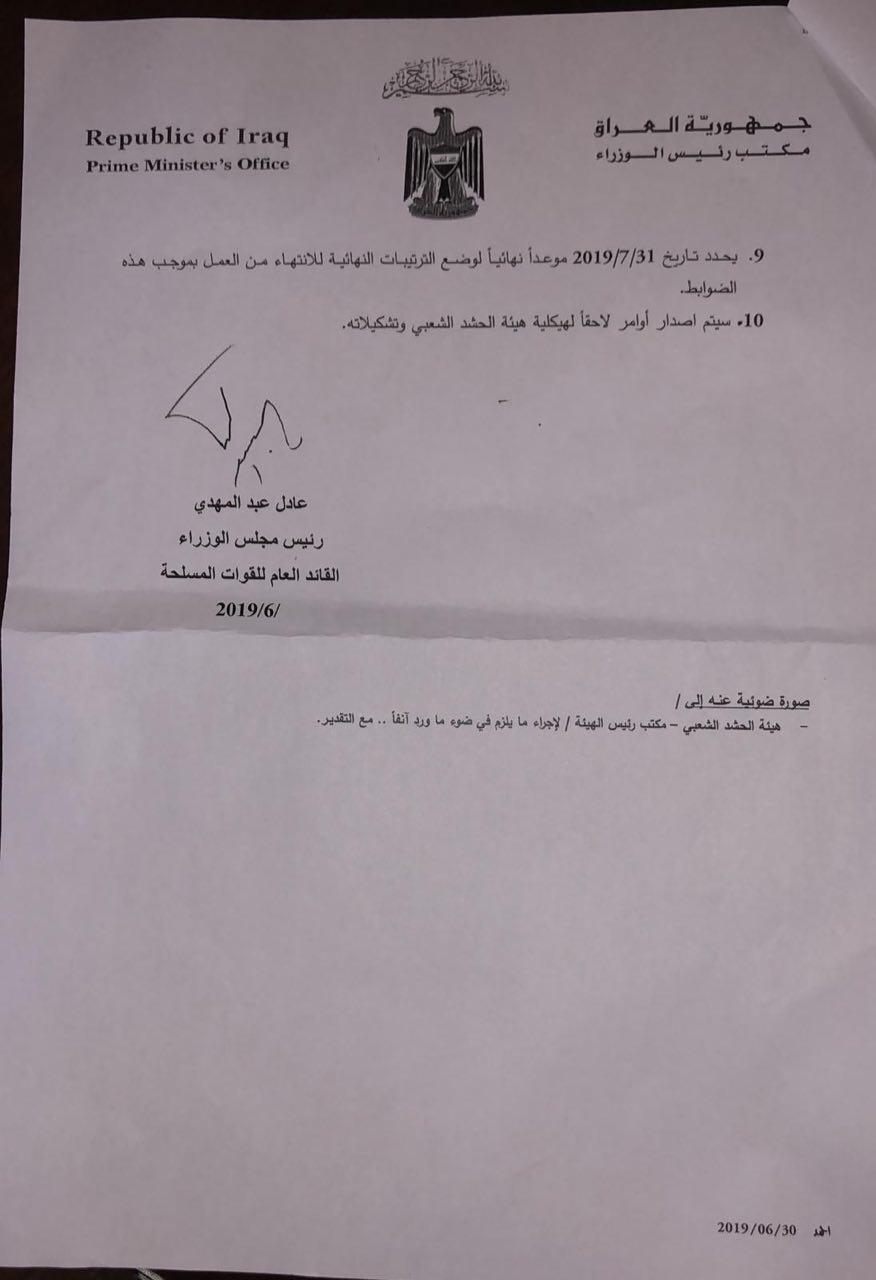 For his part, Moqtada al-Sadr on Monday welcomed the decision of Prime Minister Adel Abdul Mahdi, the integration of popular crowd factions in the regular armed forces. “What is issued is” an important first step towards a strong state that is not shaken by the winds from here or there, but I am concerned that it will not properly and fairly applied, “Sadr said in a statement on his Facebook page.
Undoubtedly, the issuance of the Diwani Order is a courageous and dare step for Prime Minister Adil Abdul Mahdi because it is a step in the right direction to reorganize the Iraqi House and a major step towards enforcing the rule of law, which leads to an Iraqi society that is socially harmonious and balanced , economically advanced, non-backward and politically stable.

Therefore, the Iraqi political blocs should cooperate with Prime Minister Adel Abdul-Mahdi in his important reform step, and not be a stumbling block in the way of reform and to overcome Iraq’s supreme interest on partisan , sectarian and Iraqi interests , and Iraq has suffered much enough as a result of very narrow calculations , and the stability of Iraq and progress, the reform project of the Iraqi Prime Minister, Adil Abdul Mahdi, means its return to its natural and deserving status in the Arab, regional and international environment.
The reform project of Prime Minister Adil Abdul Mahdi is not limited to imposing the rule of law, but also in the mechanism of choosing his ministerial team, who must enjoy a high level of competence and integrity ,the choice of Defense Minister Najah Hassan Ali Al-Shammari and Interior Minister Yassin al-Yasiri, the first is of military background and the second is of police background , is among the objectives of reform project , they are politically independent and does not belong to any political bloc in Iraq.
As for the message that Prime Minister Adel Abdul Mahdi wants to send by issuing that Diwani order, Iraq does not budge from the political conviction it believes in, namely, to work for the stability of the region, and that Iraq does not accept that its land is an arena for settling scores between countries, and according to this bases, the three presidencies of Iraq cooperate to apply this conviction i.
So , Iraqi Prime Minister Adel Abdul Mahdi will deal with all acts that contradict with this political conviction very seriously ,and among these acts where the intelligence reports indicate that the Drones that targeted the oil stations in Saudi Arabia have been launched from the city of Karbala in Iraq, and to ensure that these reports are correct through the collection of intelligence data , it can not be tolerated, because it is a flagrant violation of Iraq’s sovereignty.
And the storming of the Bahraini embassy in Baghdad because these actions harm the relationship of Iraq with the Arab countries, where a statement issued by the Office of the Prime Minister expressed deep dissatisfaction about what happened. However, the reactions to these events were contrary to the desire to strain Iraq’s relationship with the Kingdom of Bahrain and Saudi Arabia , where there was contact between President of the Republic of Iraq Barham Salih and the King Hamad bin Isa Al Khalifa , and there was also a contact between Iraqi Prime Minister Adil Abdul Mahdi and King of the Kingdom of Saudi Arabia Saudi King Salman bin Abdul Aziz, and both contacts stressed the depth of the relationship of Baghdad with Manama and Riyadh.
Iraqi Prime Minister Adil Abdul Mahdi knows that the Middle East is going through its most difficult stages, he is trying with determination and patriotism to spare Iraq the woes of multi-level conflict, the first is Iranian-American, the second is Iranian-Israeli, the third is Iran-Gulf. All these conflicts affect Iraq negatively because of the Iranian influence in it.
We have already said and we say it again that Prime Minister Adil Abdul Mahdi may be the last chance for a stable Iraq, therefore, all the Iraqi forces and the regional countries, such as Iran and the international ones such as the United States of America, should provide the necessary support so that Adil Abdul Mahdi can get Iraq out of its dark tunnel, and bring it to safety and be a bridge to bring the views of Washington and Tehran closer together.

There is no doubt that the defeat of the terrorist organization ISIS from the land of Iraq was a matter of time, because it was a thought contrary to the culture of Iraq based on coexistence and it is contrary to the good human nature, but there is a stage that comes after the stage of the terrorist organization ISIS which is the most important stage in the modern history of Iraq, Adel Abdul Mahdi , with a Comprehensive reform view and national sense, is capable of rebuilding Iraq again in cooperation with the Iraqi home and abroad, so everyone has to stand by him in his national mission.