In light of the recent security developments in Baghdad, the Iraqi Council of Representatives is scheduled to hold an emergency session on Sunday to discuss the issue of “violating the sovereignty of Iraq” and the attack launched by the United States of America at dawn on Friday January 3 this year, which resulted in the killing of the commander of the Quds Force of the Iranian Revolutionary Guard, Qassem Soleimani, the deputy head of the Iraqi Popular Mobilization organization , Abu Mahdi Al-Muhandis, and a number of Iranian leaders and leaders of the popular crowd on the road to Baghdad International Airport.

Arab media have published a copy of the draft of the resolution proposed for discussion, and then voting on it at the Iraqi parliament session scheduled for today in the capital Baghdad.

In the draft of decision to be voted upon, it says: “The House of Representatives decided in its twenty-eighth session, held on 5/1/2020 of the first legislative term, the second legislative year / fourth parliamentary session, and according to the provisions of Articles (59 / second), (1) and (109) From the constitution, and based on the national and supervisory duty of the House of Representatives as a representative of the Iraqi people with all its components, and in the interest of the safety and sovereignty of Iraq over its lands and people, and in accordance with the powers granted to it according to the constitution, issue the following decision :
1- Obliging the Iraqi government to cancel the request for assistance submitted by it to the international coalition to fight ISIS for the year 2016, in order to end military and war operations in Iraq, since the victory has been achieved, and the Iraqi government should work to end the presence of any foreign forces on Iraq’s territory, and prevent it from using the Iraqi airspace for any reason during the period of (..).

2- The Iraqi government, represented by the Commander-in-Chief of the Armed Forces, must announce the numbers of foreign technicians and trainers that need them, their whereabouts, tasks, and the duration of their contracts.

3- The Iraqi government, represented by the Minister of Foreign Affairs, should go to the United Nations and the International Security Council and submit a complaint against the United States of America for its serious violations and breaches of the sovereignty and security of Iraq.

4- This decision is implemented from the date of voting on it.
Observers of the Iraqi issue see , from a legal point of view, that the parliament has no right to cancel the security agreement without a decision by the cabinet, and then referred to the parliament for approval, and since the current government is a caretaker government, it is not entitled to issue such a law, and It means that any decision taken today by the House of Representatives is null and void, just as it is very difficult to cancel the agreement according to its texts (the final provisions thereof) except after a prior written notification a year before that by one of its parties. 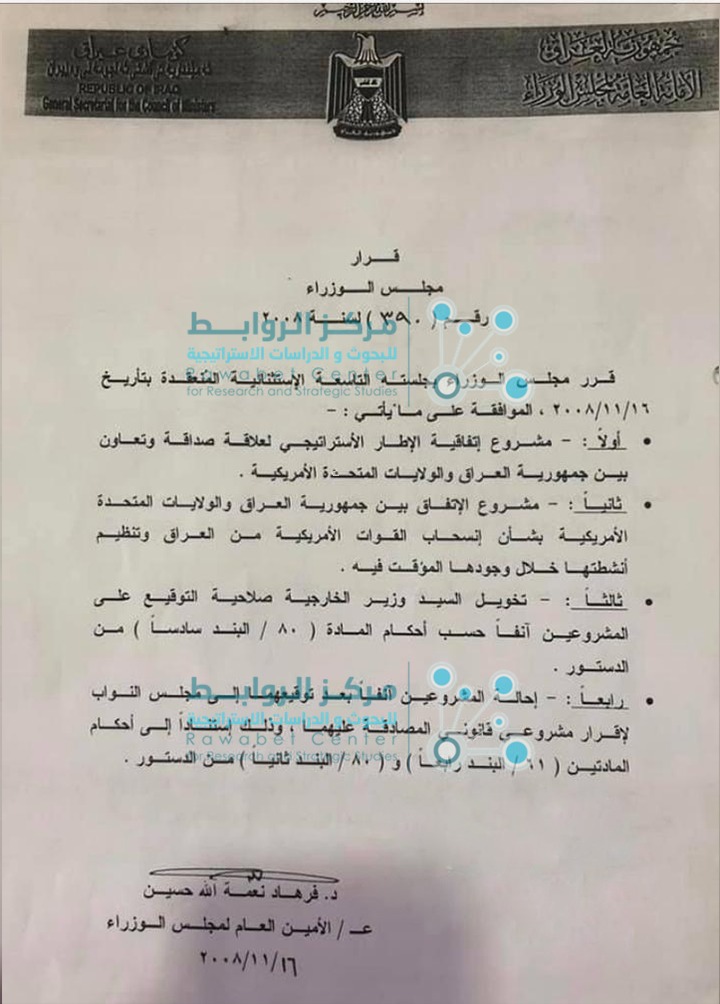 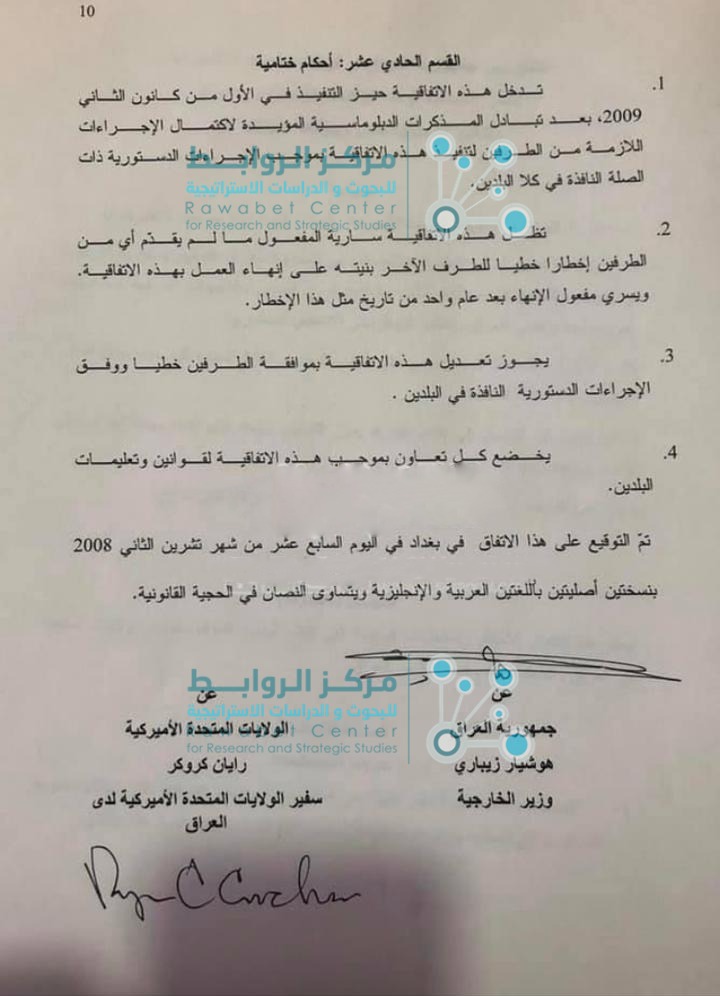 Observers believe that there are many consequences for any decision to cancel this agreement, from many aspects. On the economic level, Iraq owes a very large amount of approximately 140 billion dollars and accumulated interest, which may lead to the seizure of Iraqi funds for years, which may expose the Iraqi economy to a strong jolt, with repercussions for the Iraqi dinar, as it is possible that the price of the US dollar will reach nearly 3,000 thousand Iraqi dinars.

It is useful to note here, that the agreement generates approximately 18 to 20 billion US dollars annually in the Iraqi economy, and this is also beneficial to the Iranian economy, as it is through these funds that Iraq buys what it needs of food and construction goods, electricity and natural gas from Iran, and in the event of cancellation , this agreement would deprive Iran of that money, which it desperately needs due to the severe economic sanctions imposed on it by the US administration.

Politically, the United States of America contributed to removing Iraq from the circle of Chapter Seven sanctions within the framework of the United Nations Charter. In the event that the agreement is canceled, it is possible to re-impose sanctions on Iraq. As for the military and security, the United States of America greatly affects Iraqi air sovereignty, just as the F16 aircraft system imported by Iraq since 2009, and American Brahman tanks are technically maintained in coordination with American trainers in Iraq. The abolition of the agreement means the exit of NATO from Iraq, and Iraq becomes without any back in the face of military and security challenges, and Western diplomatic missions become without the cover of NATO and the international alliance, i.e., in simple terms, to make Iraq like Somalia .

Therefore, those who follow Iraqi affairs believe that canceling the agreement in this sensitive regional and international circumstance means that Iran’s will – which is pushing in this direction – has triumphed over the United States of America, which is rejected by the administration of US President Donald Trump, which Trump rejects, especially as it is about to draw a new policy about Iraq, one of its features is that the state sponsoring it, which is the United States of America, will not leave it again to the influential country, Iran.

The bottom line is that canceling the agreement means that Iraq will become an open country in political, militarily, economic and security terms, and at any moment subject to collapse, does this satisfy the ambition of those who are pushing to cancel the agreement?!!
Iraqi Studies Unit
Rawabet Center for Research and Strategic Studies