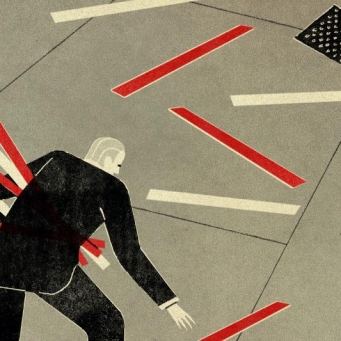 For years, Joe Biden has portrayed the presidency of Donald Trump as an aberration from which the United States can quickly recover. Throughout the 2020 U.S. presidential campaign, Biden asserted that under his leadership, the United States would be “back at the head of the table.” But a return to the pre-Trump status quo is not possible. The world—and the United States—have changed far too much. And although hailing the return of American hegemony might seem comforting to Americans, it reveals a degree of tone-deafness to how it sounds to the rest of the world. When people elsewhere look at Washington’s track record over the past two decades, they don’t see confident leadership. What they see, instead, are a series of disasters authored by Washington, chief among them the 2003 invasion of Iraq and the subsequent destabilization of much of the Middle East and the 2008 global financial crisis. During those decades, Washington also pursued an ineffectual war in Afghanistan, an incoherent policy in Syria, and ill-judged humanitarian interventions, most notably in Libya.

The failures have also been domestic. To date, the United States has handled the COVID-19 pandemic worse than any other major country. Americans make up only four percent of the world’s population but account for a staggering 25 percent of global COVID-19 cases and 19 percent of deaths from the disease. The failure has come at all levels: a stunning lack of national leadership, an alienated population unwilling to make modest sacrifices in the common interest, and a health-care system that is deeply inequitable and administratively fractured.

These maladies predated Trump, of course. President Barack Obama’s administration had to design international agreements such as the Paris climate accord and the Iran nuclear deal in a way that would avoid the need for formal ratification, because the world knows that the U.S. Senate has been unable to approve a multilateral treaty for nearly 15 years, even one modeled directly on U.S. domestic law. But Trump’s “America first” populist nationalism has cut deeply into the foundation of American foreign policy, as his administration called into question long-standing alliances, embraced authoritarian rulers, denigrated allies, and withdrew the United States from a wide range of international agreements and organizations that it founded. Beyond the moves that garnered headlines were a great many more that made it impossible for valuable institutions to operate. Under Trump, for example, the United States vetoed every nominee to the World Trade Organization’s Appellate Body, purposely keeping the number of judges below the required quorum and thereby depriving all 164 WTO member countries of the means to resolve disputes.

Stay informed.
In-depth analysis delivered weekly.
In short, what Biden regularly calls “the power of our example” is nothing like what it used to be. When it comes to the pillars of a law-abiding democracy, the United States is now more an example of what to avoid than of what to embrace. The country retains military primacy and the economic heft to impose sanctions, but the former has limited utility, and the latter are seldom effective when wielded unilaterally. To achieve its ends, Washington will have to heal at home—a long, slow process—while it rebuilds its power to persuade. As secretary of state, Antony Blinken will likely lead an important effort to rebuild morale and effectiveness within the country’s diplomatic corps, luring back talented professionals who fled Trump’s chaos, broadening recruitment, pursuing reforms to make the department’s work more efficient and creative, and appointing diplomatic veterans to key posts at home and abroad. But such steps will take a long time to make a difference. Meanwhile, Biden’s team may be seriously overestimating the leverage that the United States retains for initiatives that depend on its example, such as the global summits the president wants to convene on climate change and renewing democracy.

Facing a globalized world in which power is dispersed and the United States’ reputation is diminished, Biden will confront cautious, even skeptical foreign partners—a challenge to which American leaders are unaccustomed. Much of his agenda will have to be carried out through executive orders, which, the world knows, can be just as quickly undone by the next president. Foreign governments understand that last year’s presidential election was not a repudiation of Trumpism. Even close allies have therefore been forced into a dangerous game of American roulette, dealing with a United States that can flip unpredictably from one foreign policy posture to its opposite. The logical response for them is to hedge: avoiding major commitments and keeping their options open, even when it comes to U.S. policies that would otherwise be welcome. In such an environment, everything that Washington hopes to achieve will be more difficult.

PICKING UP THE PIECES
Unless there is a current crisis, foreign policy generally plays a negligible role in U.S. elections. That was never more true than in the 2020 Democratic primary campaign, in which every contender named repairing democracy at home as the most important “foreign policy” priority. Biden was an extreme example. The fact sheet that accompanied his first major foreign policy address, delivered in October 2019, listed “remake our education system” as the first bullet point and “reform our criminal justice system” as the second.

Nor was foreign policy a significant topic in the general election campaign, even though the past half century has shown that what occurs overseas is more than likely to determine a president’s legacy. Disastrous wars or foreign imbroglios severely damaged the administrations of five of Trump’s nine most immediate predecessors: Lyndon Johnson (the Vietnam War), Richard Nixon (Vietnam, again), Jimmy Carter (the Iran hostage crisis), Ronald Reagan (the Iran-contra affair), and George W. Bush (the Iraq war). Foreign policy is also the source of sudden surprises that call for leaders with experience in rapid, high-stakes decision-making and a knowledge of recent history. Nonetheless, voters don’t seem to care much—and thus neither do most candidates.

Still, Biden’s intentions can be inferred from his record in government, from what he has said and written in the past few years, and, particularly, from his early high-level appointments. Although together those things shed a good deal of light on what he will try to do, it is too early to know what a U.S. Senate that features the thinnest possible Democratic majority will allow him to accomplish or how doubting foreign governments will respond. Unknowable, too, are the effects of dangers now building offstage, the kinds of systemic shocks that have become almost a norm of the last several decades. Finally, there are practical issues of sequencing that get lost in campaign rhetoric. For instance, it is one thing to say, as Biden has, that new trade agreements will have to wait until after the federal government has made major investments in infrastructure and research and development; it is quite another thing to do that in practice. The world won’t take a time-out while the United States makes badly needed repairs at home.

The world won’t take a time-out while the United States makes badly needed repairs at home.
It is certain that Biden will make two overarching changes to the foreign policy of Trump and his secretary of state, Mike Pompeo. Biden understands the strength inherent in Washington’s network of allies and friends and will do all he can to rebuild close relationships with them, especially in Europe. He will also reverse the Trump administration’s dismissive attitude toward multilateral problem solving and the international institutions that make it possible. Washington will now show up at even the most boring meetings, represented by officials who know something about what is being discussed and who support, rather than oppose, the mission of the international organizations that convene them. These will be sweeping changes, welcomed around the world.

Among specific priorities, climate change is clearly at the top of Biden’s mind. The president has assembled a team whose strength signals the weight he attaches to this issue: a former secretary of state (John Kerry) as a special envoy on climate, an experienced former head of the Environmental Protection Agency (Gina McCarthy) in a newly created senior environmental post in the White House, a highly regarded state official (Michael Regan) to lead the EPA, and a former Michigan governor (Jennifer Granholm) known for her expertise in alternative energy sources, especially electric vehicles, as head of the Department of Energy.

U.S. foreign policy specialists fall into two broad camps, one of which advocates continued U.S. leadership globally and across the full spectrum of issues. The other believes that the United States should define its interests more narrowly with regard to both where and what. Within the former group are those who argue that the world requires leadership and there is no alternative leader to the United States now or on the horizon. Some go further, claiming that U.S. interests inevitably will be damaged more by doing too little than by trying to do too much. They favor a unilateral brand of leadership and generally approve of armed interventions. They tend to rely more on familiarity with the past than on insight into the future, and they largely ignore the force of domestic public opinion. Others see a more restrained role for the United States as the first among equals in a multilateral community.

Recently, some in this first camp have begun to question the fitness of the current order in a world characterized by surging populism and authoritarian governance. They argue for an order defined by a coalition of democracies on one side in opposition to authoritarian governments on the other. Biden sometimes gives unsettling hints of sharing this view. Should such an order emerge, the world would be less likely to deal successfully with the global challenges that pose the greatest risk to everyone: nuclear proliferation, corruption, cyberwar, pandemics, and climate change.

If the Biden administration continues as early indications suggest, it will fall squarely into the first of the two broad camps, and if it stumbles, it will be because it looks too much to the past and tries to do more than the country’s resources, will, and reputation can currently support. It will try hard to make progress on key issues, although it may overreach in attempting to promote democracy. But if it can develop a strategically sound relationship with China, reassert itself in relations with Russia, pursue economic policies that see international economic growth as a win-win and not a zero-sum competition, and recapture the confidence of allies and friends, it will have done more than enough to be proud of, even without leaving behind a new foreign policy consensus.