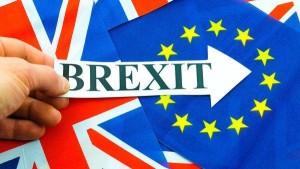 The  global markets witnessed , after the British vote for the exit from the European Union (Brexit) , a state of turmoil and instability after  the ratio reached by  52 percent of the vote, in favor of the country’s exit from the EU after membership  lasted for 43 years. The consequences will be huge for the British people. Britain’s economy and legal system have become deeply integrated with the European continent . Unraveling those relationships is likely to be economically and socially disruptive.

Talking  about the developments of this matter seems  difficult and more ambiguous in light of  the linkage  and correlation between economic and political factors between Britain and the European Union, and to predict the future is very difficult, especially as the economies of Britain and the EU depends mainly on the financial markets to finance the economy.

Unlike the Cameron government , Nicolas Sturgun Prime Minister of Scotland supports the decision to stay in the Union and strongly and has said that the future of their country is within the European Union, and there are expectations regarding the declaration of the desire of Scotland to independence again, and it is likely to organize a new referendum on independence from Britain, which chose to leave the European Union.

Also, a majority in Northern Ireland voted (55.7%)  for the benefit of staying in the EU, compared to 44.3% for the benefit out of it. The same applies to  Gibraltar  ( Tariq mountain). What gives a big boost to separatist movements to organize referendums to stay in or out of Britain.

We  are limited  ourselves here in addressing the impact of exit on the economic side  exactly how this   exit will   put its  consequences  on the  economy  of  the euro zone, and Britain.

As it is well known to many observers for International Economics,  the British economy is the fifth largest economy in the world with an estimated size to 2.678 trillion dollars. And Britain mainly rely on financial markets to finance the economy, and perhaps this is one of the  most important factors  that will contribute to the prevailing of  uncertainty of  the euro zone, especially Britain, which  may face great difficulties as a result of this new situation.

In fact, the vote has been split into the British House between supporters and opponents out of the European Union, of course Proponents out see that their country has lost much of its sovereignty because of the EU’s policies, and will regain its economic and political   recovery   in the event of departure, as well as  the immigration, the economy and sovereignty issues formed the most important aspects of that dispute , while  Opponents of the move away from Europe are denying  that , and assert that the real problems  are waiting the country in case the referendum for secession.

Opponents to get out agree  that this  move would isolate the British economy and the loss of opportunities provided by the European  unified market, and the country will be obliged to pay more money for trade in the European continent.

Reaction to the outcome of the vote was very quick after Sterling fell to its lowest level in 31 years on Friday, its biggest drop in its history, and  billionaire George Soros predicted , who famously bet on a decline in the pound in 1992,  that the pound may fall to $ 1.15.

The decline of the Sterling will pay the British central bank  to raise interest rates on the pound in order to avoid inflation, which would result from the decline in the pound’s exchange rate. Which means that the central  bank will eliminate the growth to freeze investment

According to the forecasts of the International Monetary Fund, the vote  in favor of Britain ‘s exit  of the European Union would cause in the decline of the British economy by 5 percent by 2019, compared to vote in favor of staying within the Union.

In an article in the magazine ( British Economist ) titled ” we will drop if we are divided: vote for the exit from the EU would weaken both the UK and Europe”,  it said that the vote to leave would be dangerous and will harm the politics and the economy in Britain, and the loss of one of the largest EU members will cause a deep wound in the rest of Europe.

The most prominent  expectations  see that Britain’s unemployment rate, which has the lowest level in ten years, currently at 5%, which is at the lowest level with 1.67 million unemployed will rise after coming out of the European Union, although Britain’s success in avoiding job losses as much as happened in the other countries after the financial crisis, but the exit will result in the decline of investments and therefore the high unemployment rate.

According to research conducted by the Confederation of British Industry Action Group ((CBI)),  the vote of Britain in favor of leaving the EU could cost the economy 100 billion pounds (137 billion US dollars) and the loss of 950,000 jobs by 2020.

The economists believe that Britain out of the EU   is of negative consequences for the UK economy, since 45% of its exports directed to Europe, and  its exit will force  it to renegotiate  on  more than 60 trade agreement with the countries of the world, including EU countries.

the Peterson Institute for International Economic Studies  believed , based in  Washington, that the British exit would be a stumbling block in the way of economic growth  of  the European Union.

According to the experts of the financial markets   that the central banks are trying probably  to achieve the stabilization by request more loans to banks or other ways to make credit more abundant quickly .Market volatility may help to persuade the Federal Reserve bank  to postpone the likely increase of the interest rate  this year  which  is now in doubt, according to the report.

The euro zone is not alone to be affected by the withdrawal of Britain from the EU, but these  effects  included a lot of countries in the world noting that the stock markets lost in the world  what is  equal to 2000 billion dollars during the day Friday June 24. This loss is  very big on British banks, which lost 20% of their value. What also included other stock markets, such as the Frankfurt Stock Exchange, which lost 16.16% of its value, and Paris, with a loss of 10.12%, and Tokyo with a loss of 8%, and Hong Kong, 5%.Thus, it is expected that stock markets remain closed for days in the event of continued deterioration of the stock. It should be noted that investors were resorting to transfer their funds to safe assets, such as gold and the yen and silver.

In this context, investors and economy experts  estimated  the size of the losses incurred by investors and sovereign funds Gulf, because of Britain’s withdrawal from the European Union, including between $ 30 billion and 45 billion, both in terms of investments in real estate or the stock and bond markets or trade. The sources estimated the total Gulf investments in the UK, owned by individuals and sovereign funds, more than $ 250 billion, expected the losses  to be ranged between 10 and 15 percent as a result of decline in the value of assets.

On the other hand, it will result in Britain’s exit   the Gulf investments decline in Britain strongly during the next phase  due to the stage of uncertainty, and lack of vision in terms of economic and political policies, which will affect the return on  the investment, especially as most of the international  evaluation companies have already begun to reduce its evaluation of Britain .  it is likely that the decline of « Gulf investment flow rate to Britain is  between 20 percent and 30 percent, and that investors reconsider their investments in stocks and bonds.» and  said that  the « the withdrawal of Britain from the EU has  negative consequences  on the economy of Britain.

Finally, the British decision to leave the EU involves  a lot of repercussions, which began from the first moment of this decision on  both sides and on the global economy, and these effects  will continue in the future, the issue is complicated and tangled, and especially when we’re talking about 43 years of British membership in the Union, which is the big nuclear state and so far, despite the fact that a lot of interpretations showed what  difficulties could be faced by  Britain from this decision, but the uncertainty surrounding Britain’s economic future makes the image vague, and the consequences of this option is still not clear, especially when the  political and economic  factors are  overlapped together, where the issue starts to be complex  and  the question remains open  about the size of the political and economic consequences that await Britain and the European Union in the near future, however, we have to remain waiting to know whether this disconnection is on  specific aspects or fully? Will there be agreements between the two sides to avoid real economic crisis?  What will happen next ? It is what we agree with it , and the coming days will bring answers to all these questions.