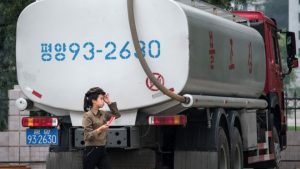 China has moved to limit North Korea’s oil supply and will stop buying textiles from the politically isolated nation, it said on Saturday.
China is North Korea’s most important trading partner, and one of its only sources of hard currency.
The ban on textiles trade will hurt Pyongyang’s income, while China’s oil exports are the country’s main source of petroleum products.
The tougher stance follows North Korea’s latest nuclear test this month.
The United Nations agreed fresh sanctions – including the textiles and petroleum restrictions – in response.

A statement from China’s commerce ministry said restrictions on refined petroleum products would apply from 1 October, and on liquefied natural gas immediately.
A limited amount, allowed under the UN resolution, would still be exported to North Korea.
The current volume of trade between the two countries – and how much the new limits reduce it by – is not yet clear.
But the ban on textiles – Pyongyang’s second-biggest export – is expected to cost the country more than $700m (£530m) a year.
Kim and Trump ‘children in kindergarten’
What weapons does North Korea have?
How a Pacific nuclear test might happen
China and Russia had initially opposed a proposal from the United States to completely ban oil exports, but later agreed to the reduced measures.
North Korea has little energy production of its own, but does refine some petroleum products from crude oil it imports – which is not included in the new ban.
The AFP news agency reports that petrol prices in Pyongyang have risen by about 20% in the past two months.
“It was $1.90 yesterday, today it is $2,” a petrol station employee told the agency. “I expect the price will go up in the future.”

North Korea also produces coal, some $1.2bn of which was exported to China in 2016, but China had already strictly limited its imports of North Korean coal earlier this year.
North Korea’s foreign minister is expected to speak at the United Nations General Assembly later on Saturday, amid an escalating war of words between Kim Jong-un and Donald Trump.
The North Korean leader earlier labelled Mr Trump “mentally deranged” and a “dotard” while Mr Trump labelled Mr Kim a “madman” in response.
Russia’s foreign minister, Sergei Lavrov, said the row was “like when children in a kindergarten start fighting and no-one can stop them”.
Mr Lavrov said a pause was needed, “to calm down the hotheads”.

The pair were at odds over President Trump’s speech at the United Nations General Assembly, in which he threatened to “totally destroy” North Korea if forced to do so in defence of the US or its allies.
He also mocked Kim Jong-un with a disparaging nickname, saying: “Rocket man is on a suicide mission.”
But the North Korean leader said remarks by the “deranged” US president convinced him he is right to develop weapons for North Korea.
‘Dotard’ Trump? The story of ‘rocket man’ Kim’s insult
Decoding Kim’s nuclear Pacific threat
North Korea crisis in 300 words
In an unprecedented personal statement, Mr Kim said Mr Trump would “pay dearly” for his speech, which he labelled “unprecedented rude nonsense”.
He said Mr Trump had insulted his country in the eyes of the world, and threatened to “surely and definitely tame the mentally deranged US dotard with fire.”
Experts say this is the first time a North Korean leader has made a direct address to an international audience – and it merits serious and thorough consideration.