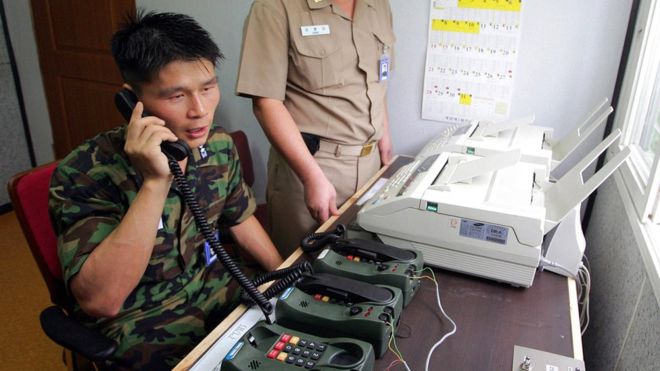 North Korea has said it will reopen a telephone hotline to South Korea, to facilitate talks on its possible participation in the Winter Olympics.

Seoul’s Yonhap news agency reported that the inter-Korean communications channel would be restored at 15:30 local time (06:30 GMT) on Wednesday.

It comes after Kim Jong-un said he was “open to dialogue” with Seoul and to sending a team to the Games.

The two nations have not held high-level talks since December 2015.

A North Korean official announced the telephone hotline’s re-opening in a televised statement.

He said the two nations would discuss the practical issues around a proposal to send a North Korean delegation to the Winter Olympics in Pyeongchang, South Korea in February.

“We will discuss working-level issues over our potential dispatch of the delegation,” Yonhap quoted the official as saying.

North Korea crisis in 300 words
A history of North Korea at the Olympics
Trump to Kim: My button’s bigger than yours
South Korea had indicated that the North’s participation in the Games would be welcomed.

He said attending the Games would be “a good opportunity to show unity of the people” in North Korea.

It is not yet clear whether North Korea will accept that offer, but the opening of the hotline will allow for preliminary discussions to be held.

The North cut off communications in 2016 following a row over the Kaesong joint industrial complex.

South Korea says it has not answered calls on the hotline since.

On Tuesday, a South Korean official said they had been trying to call since Mr Kim’s speech but there had been no answer.

The press secretary for President Moon said the restoration of the hotline was “very significant”.

“It creates an environment where communication will be possible at all times,” he told AFP.

North Korea has come under increasing international pressure in the past year over its nuclear weapons programme.

Responding to the developments this week, US President Donald Trump tweeted earlier that economic sanctions and external pressure were “beginning to have a big impact”.