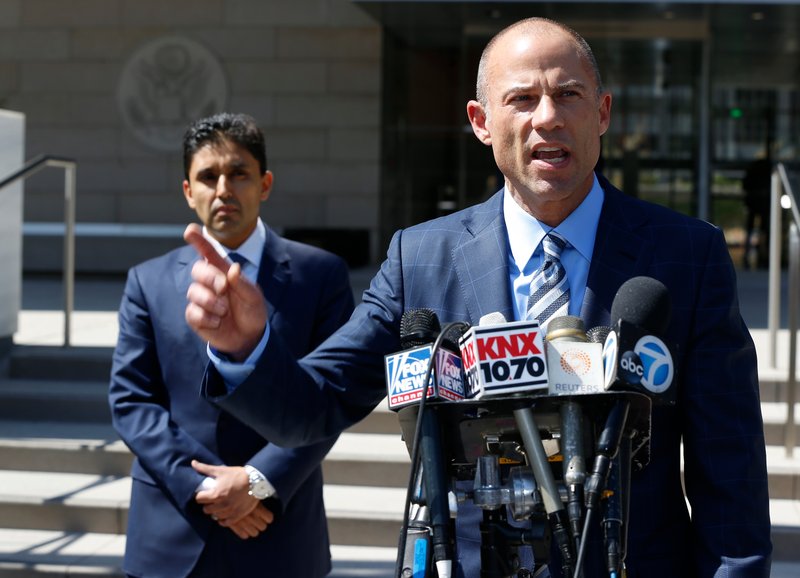 U.S. Judge S. James Otero in Los Angeles said there were “gaping holes” in Michael Cohen’s request for a delay and it was not enough for his attorney to file a statement on his behalf. He gave Cohen until Wednesday to do so himself.
Daniels says she had an affair with Trump in 2006 and is suing to dissolve a confidentiality agreement that prevents her from talking about it. She’s also suing Cohen, alleging defamation.

Cohen sought to delay the civil case 90 days after FBI agents raided his New York office and residence, seeking records about the $130,000 agreement that Daniels signed days before the 2016 presidential election.

Otero, speaking from his experience on the bench and without knowledge of the investigation, said it was “substantially likely” there would be some criminal action.

“This is not your standard case,” Otero said. “I would expect something big to follow.”
Outside a California court on Friday, Stormy Daniels’ attorney Michael Avenatti said he was confident that the civil case would move forward without delay. He also stated his belief that Michael Cohen will plead the Fifth Amendment. (April 20)

Cohen’s lawyer argued that because the criminal investigation overlaps issues in the lawsuit, Cohen’s right against self-incrimination “may be adversely impacted if this case proceeds” because he won’t be able to respond and defend himself.

Otero said attorney Brent Blakely had not shown a large enough overlap to justify a delay but noted that the defense was in a conundrum because the “breadth and scope of the investigation is a mystery.”

Daniels’ attorney, Michael Avenatti, said it was a “strategic and purposeful” decision by Cohen not to previously file a declaration. Outside court, Avenatti said it was “clear to me Michael Cohen and the president do not want to publicly state” that Cohen intends to invoke the Fifth Amendment.

Daniels, whose real name is Stephanie Clifford, has offered to return the $130,000 so she can “set the record straight.” She argues the agreement is legally invalid because it was only signed by her and Cohen, not by Trump.

Cohen, who has denied there was ever an affair, said he paid the money out of his pocket using a home equity loan. He has said neither the Trump Organization nor the Trump campaign was a party to the transaction with Daniels and he was not reimbursed for the payment.

Trump answered questions about Daniels for the first time earlier this month and said he had no knowledge of the payment made by Cohen and didn’t know where Cohen had gotten the money. The White House has repeatedly said Trump denies the affair.

Cohen’s attorneys have accused Daniels of violating the confidentiality clauses more than 20 times and said she could be liable for $1 million in damages for each violation.

Blakely said the agreement had not stopped Daniels from doing interviews with “60 Minutes” and “The View” and that Avenatti had done 53 television appearances, “54 if you count tonight’s show with Bill Maher.”

The agents were seeking any information on payments made to Daniels and a former Playboy model, Karen McDougal, according to people familiar with the investigation but not authorized to discuss it publicly.

The search warrants also sought bank records, records on Cohen’s dealings in the taxi industry and his communications with the Trump campaign, the people said.

A spokesman for Daniels’ former lawyer, Keith Davidson, who negotiated the nondisclosure agreement, said Friday that he had been contacted by federal investigators as part of the Cohen investigation.

Davidson provided them with “certain limited electronic information” and “will continue to cooperate to the fullest extent possible under the law,” said the spokesman, Dave Wedge.