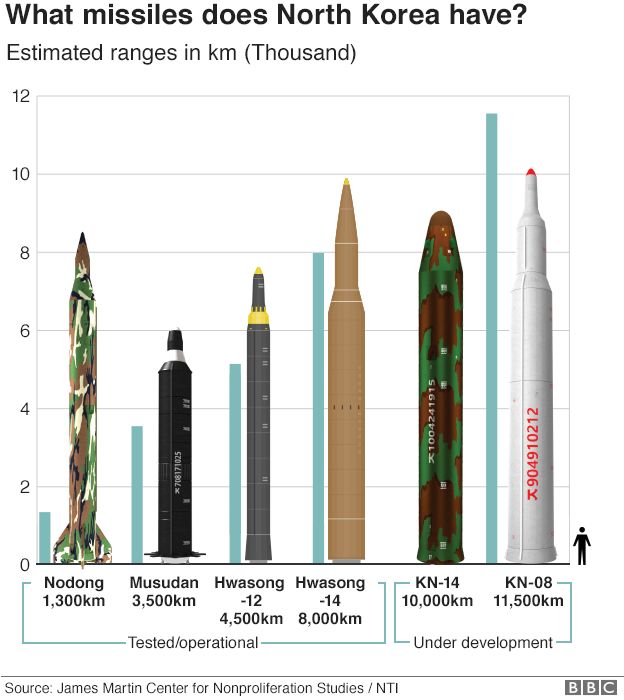 North Korean leader Kim Jong-un says he has suspended all missile tests and will shut down a nuclear test site.

The surprise announcement comes as North Korea prepares for historic talks with South Korea and the US.

Mr Kim is due to meet his South Korean counterpart Moon Jae-in next week for the first inter-Korean summit in over a decade, and US President Donald Trump by June.

Both countries have been pushing Pyongyang to denuclearise and they reacted positively to the latest development.

“This is very good news for North Korea and the World – big progress!” Mr Trump tweeted after the announcement.
On Thursday, the US leader said there was a “bright path available to North Korea when it achieves denuclearisation”.

A spokesperson for the South Korean president called the North’s move “meaningful progress”.

“It will also contribute to creating a very positive environment for the success of the upcoming South-North summit and North-United States summit,” a statement from Mr Moon’s office said.

Why has Pyongyang halted tests?
The decision to suspend missile launches was made during a meeting of the ruling party’s central committee on Friday, the Korean Central News Agency (KCNA) said.

In a statement quoted by the agency, Mr Kim said it was no longer necessary to conduct missile tests because “nuclear weaponisation” had been achieved.

“The northern nuclear test site has completed its mission,” he said.

This echoes a previous statement made during a New Year address in which Mr Kim declared his nuclear and ballistic missile programmes completed.

After six nuclear tests North Korea may feel it does not need to upgrade its existing designs, says the BBC’s Laura Bicker in Seoul.

Although Pyongyang said it would abolish its nuclear test site, there is no indication it is planning to get rid of its existing weapons.

The decision to halt missile tests is also aimed at pursuing economic growth, according to KCNA. Mr Kim reportedly pledged to “concentrate all efforts” on developing a socialist economy during Friday’s meeting.

The summit is the prize
By Ankit Panda, senior fellow at the Federation of American Scientists

These concessions from North Korea have come before the two anticipated summits with the US and South Korea.

One may wonder why Mr Kim should give up so much in advance instead of hanging on to a nuclear test-ban and an ICBM moratorium as aces up his sleeve.

The answer is simple: a summit with a US president is enough of a prize in itself. For Mr Kim, it’s something that neither his grandfather nor his father could attain.

What North Korea loses by demolishing its nuclear test site and submitting to a unilateral moratorium on ICBM launches is entirely tolerable compared to what Mr Kim gains by sitting alongside President Trump.

When and where might a Trump-Kim summit take place?
Mr Trump surprised the international community last month by accepting Pyongyang’s suggestion for direct talks. It would be unprecedented for a sitting US president to meet a North Korean leader.

Experts have speculated that a location for talks could be the Demilitarised Zone between North and South Korea, another Asian country, or a neutral European country.

Speaking on Thursday, President Trump said that if he did not think the meeting would be successful he would not go, and if the meeting went ahead but was not productive, he would walk out.

“Our campaign of maximum pressure will continue until North Korea denuclearises,” he said.

Major North Korean missile tests
North Korea has carried out numerous missile tests. Some of these exploded shortly after launch, but others travelled for hundreds of miles before landing in the sea. Here are some of the major tests reported so far:

12 February 2017 – A medium-range ballistic missile launched from Banghyon air base near the west coast. It flew east towards the Sea of Japan for about 500km.

4 July 2017 – Pyongyang claimed to have successfully tested an intercontinental ballistic missile for the first time. Officials said it reached an altitude of 2,802km and flew for 39 minutes.

29 August 2017 – North Korea fired what is thought to be its first nuclear-weapon capable ballistic missile over Japan. It was launched from near Pyongyang and reached a height of about 550km.

15 September 2017 – A ballistic missile was fired across Japan for the second time and landed in the sea off Hokkaido. It reached an altitude of about 770km and travelled 3,700km.

29 November 2017 – North Korea said it had successfully tested a new type of intercontinental ballistic missile that could reach the whole of the continental US. The Hwasong-15 missile landed in Japanese waters but flew higher than any other missile the North had previously tested.