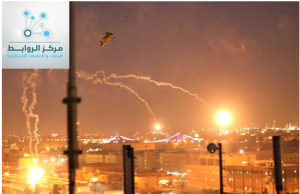 Once again, a military base where American forces stationed in it near Kirkuk, in northern Iraq, was attacked by a missile, last Thursday, and the attack by a “Katyusha” missile, hitting the “Kiwan” or “k1” base where the Iraqi Federal Police and US forces are present. An Iraqi security source confirmed that the American warplanes flew over the city at low altitudes, despite bad weather after the bombing of the base.

For its part, the United Kingdom condemned the attack, and the British ambassador in Baghdad, Stephen Hickey, tweeted, “We strongly condemn the missile attack on Iraqi and coalition forces this evening in Kirkuk.” He pointed out that “it is necessary for the Iraqi government to take urgent measures to deter the armed groups and hold them accountable to undermine the sovereignty of Iraq.”

This is the first attack on the base known as the “K1” since last December 27, when it was bombed by several rocket-propelled grenades at that time, killing an American civilian, and Washington blamed in this attack on the Iraqi Hezbollah Brigades.

In another escalation step against the American forces in Iraq, the Al-Nujaba Movement in Iraq announced the start of the countdown of the military response to the American forces, two days after targeting by a missile to a base where Americans are stationed north of the capital Baghdad.
The movement’s spokesman, Nasr al-Shammari, said in a tweet on Twitter – today, Saturday – that this decision is an Iraqi privilege, and that it will not be allowed for the interference for its delay from any internal or external party.

Al-Shammari indicated that “the response will be in the name of the operations of the martyr Commander Jamal”, referring to the real name of Abu Mahdi Al-Muhandis, deputy head of the Popular Mobilization Committee who was assassinated with the commander of the Iranian Quds Force Qassem Soleimani with an American strike in Baghdad early last month.

In line with this threat, four missiles fallen near the US embassy in Baghdad in the early hours of Sunday morning, according to a US military source told “Agence France Presse”, without immediately clarifying whether the attack resulted in damage or injuries.

Several explosions were heard in the Iraqi capital, around 3:30 p.m. local time (12:30 GMT), followed by sounds of planes flying overhead. The siren sounded across the US embassy compound in the fortified Green Zone, according to the US source and a diplomat residing in a nearby area.

It seems that the American Middle Eastern political analyzes expected that the pro-Iranian Iraqi factions would attack the American forces present in Iraq, so the American administration demanded that its response to that provocation be in Syria and not in Iraq, saying, “If the United States launches more military operations in response on Iranian aggression or another by Iran’s proxies, it would be better to do it in Syria, because this would serve the twin goals of avoiding further escalation in Iraq and targeting an important Iranian center. The assassination of Soleimani and the abu Mahdi al-Muhandis on Iraqi soil had enabled Muqtada al-Sadr to exploit local anger to achieve his own goals. Targeting proxy groups in Syria would also send a message that Washington aims to end Tehran’s cross-border project. Operations inside Syria may be more difficult after the United States has fewer allies, but any actions it takes there may be more overt. Finally, US officials should verify how the various Shiite groups are interconnected in Syria and other countries, taking this overlap into account when developing future sanctions. ”

American political analyzes also indicate that response actions must be reviewed and updated regularly, so it is necessary to use any response system and inspect it continuously to ensure that it is still appropriate to its intended purpose. Washington can then change the method of calculating its response rate as secretly as it wants. By reducing the pressure of having to respond immediately for fear of consideration [that the United States] turns its left cheek, such a system can reduce the risk of being drawn into launching retaliatory strikes under dangerous conditions – especially when enemy forces aim to lure American forces into causing side effects. There are already many components of such a system (such as goal examination and proportionality considerations), but they are not incorporated into a logical framework of self-defense.

To get out of the current vicious cycle, the US government needs a more formal retaliation system in which mechanical and political advantages are balanced. Otherwise, Iran and its proxy militia will continue to cross the limits of deterrence until it kills more Americans or painfully wounds them. The assassination of the leader of the “Hezbollah Brigades” Abu Mahdi Al-Muhandis and the Iranian leader Qassem Soleimani on January 3 constituted a surplus of revenge at the same time, which creates a great danger of unintended escalation and the possibility of undermining the comprehensive American position in Iraq and Syria. Those who desire peace must strive to gradually create a more deterrent system that can reduce the temperature of the US-Iranian conflict.

After lean years of “wars, siege and occupation”, is it not the right of the Iraqi people to stabilize their state and establish a civil state that takes into account the interests of all its citizens, or is this state a dream that is difficult to achieve, and that its destiny to live in a continuous nightmare called the militias and armed factions that kidnapped the Iraqi state, so that It does not take into account the interests of the Iraqi people, and puts Iraq in constant problems with countries, foremost of which is the United States of America. It is always ready to implement an agenda that is being prepared outside Iraq for implementation on its soil!! Armed militias do not work to build countries but to destroy them, and here we ask: How long will Iraq remain kidnapped by it?!