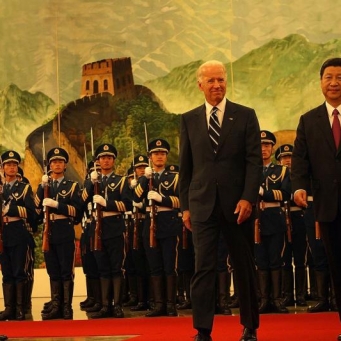 Officials in Washington and Beijing don’t agree on much these days, but there is one thing on which they see eye to eye: the contest between their two countries will enter a decisive phase in the 2020s. This will be the decade of living dangerously. No matter what strategies the two sides pursue or what events unfold, the tension between the United States and China will grow, and competition will intensify; it is inevitable. War, however, is not. It remains possible for the two countries to put in place guardrails that would prevent a catastrophe: a joint framework for what I call “managed strategic competition” would reduce the risk of competition escalating into open conflict.

The Chinese Communist Party is increasingly confident that by the decade’s end, China’s economy will finally surpass that of the United States as the world’s largest in terms of GDP at market exchange rates. Western elites may dismiss the significance of that milestone; the CCP’s Politburo does not. For China, size always matters. Taking the number one slot will turbocharge Beijing’s confidence, assertiveness, and leverage in its dealings with Washington, and it will make China’s central bank more likely to float the yuan, open its capital account, and challenge the U.S. dollar as the main global reserve currency. Meanwhile, China continues to advance on other fronts, as well. A new policy plan, announced last fall, aims to allow China to dominate in all new technology domains, including artificial intelligence, by 2035. And Beijing now intends to complete its military modernization program by 2027 (seven years ahead of the previous schedule), with the main goal of giving China a decisive edge in all conceivable scenarios for a conflict with the United States over Taiwan. A victory in such a conflict would allow President Xi Jinping to carry out a forced reunification with Taiwan before leaving power—an achievement that would put him on the same level within the CCP pantheon as Mao Zedong.

Washington must decide how to respond to Beijing’s assertive agenda—and quickly. If it were to opt for economic decoupling and open confrontation, every country in the world would be forced to take sides, and the risk of escalation would only grow. Among policymakers and experts, there is understandable skepticism as to whether Washington and Beijing can avoid such an outcome. Many doubt that U.S. and Chinese leaders can find their way to a framework to manage their diplomatic relations, military operations, and activities in cyberspace within agreed parameters that would maximize stability, avoid accidental escalation, and make room for both competitive and collaborative forces in the relationship. The two countries need to consider something akin to the procedures and mechanisms that the United States and the Soviet Union put in place to govern their relations after the Cuban missile crisis—but in this case, without first going through the near-death experience of a barely avoided war.

But by far the greatest gift that Trump delivered to Beijing was the sheer havoc his presidency unleashed within the United States and between Washington and its allies. China was able to exploit the many cracks that developed between liberal democracies as they tried to navigate Trump’s protectionism, climate change denialism, nationalism, and contempt for all forms of multilateralism. During the Trump years, Beijing benefited not because of what it offered the world but because of what Washington ceased to offer. The result was that China achieved victories such as the massive Asia-Pacific free-trade deal known as the Regional Comprehensive Economic Partnership and the EU-China Comprehensive Agreement on Investment, which will enmesh the Chinese and European economies to a far greater degree than Washington would like.

China is wary of the Biden administration’s ability to help the United States recover from those self-inflicted wounds. Beijing has seen Washington bounce back from political, economic, and security disasters before. Nonetheless, the CCP remains confident that the inherently divisive nature of U.S. politics will make it impossible for the new administration to solidify support for any coherent China strategy it might devise.

Chinese Coast Guard vessels passing Philippine fishing boats in the South China Sea, April 2017
Erik De Castro / Reuters
Biden intends to prove Beijing wrong in its assessment that the United States is now in irreversible decline. He will seek to use his extensive experience on Capitol Hill to forge a domestic economic strategy to rebuild the foundations of U.S. power in the post-pandemic world. He is also likely to continue to strengthen the capabilities of the U.S. military and to do what it takes to sustain American global technological leadership. He has assembled a team of economic, foreign policy, and national security advisers who are experienced professionals and well versed in China—in stark contrast to their predecessors, who, with a couple of midranking exceptions, had little grasp of China and even less grasp of how to make Washington work. Biden’s advisers also understand that in order to restore U.S. power abroad, they must rebuild the U.S. economy at home in ways that will reduce the country’s staggering inequality and increase economic opportunities for all Americans. Doing so will help Biden maintain the political leverage he’ll need to craft a durable China strategy with bipartisan support—no mean feat when opportunistic opponents such as Pompeo will have ample incentive to disparage any plan he puts forward as little more than appeasement.

If both sides could agree on those stipulations, each would have to accept that the other will still try to maximize its advantages while stopping short of breaching the limits. Washington and Beijing would continue to compete for strategic and economic influence across the various regions of the world. They would keep seeking reciprocal access to each other’s markets and would still take retaliatory measures when such access was denied. They would still compete in foreign investment markets, technology markets, capital markets, and currency markets. And they would likely carry out a global contest for hearts and minds, with Washington stressing the importance of democracy, open economies, and human rights and Beijing highlighting its approach to authoritarian capitalism and what it calls “the China development model.”

Even amid escalating competition, however, there will be some room for cooperation in a number of critical areas. This occurred even between the United States and the Soviet Union at the height of the Cold War. It should certainly be possible now between the United States and China, when the stakes are not nearly as high. Aside from collaborating on climate change, the two countries could conduct bilateral nuclear arms control negotiations, including on mutual ratification of the Comprehensive Nuclear Test Ban Treaty, and work toward an agreement on acceptable military applications of artificial intelligence. They could cooperate on North Korean nuclear disarmament and on preventing Iran from acquiring nuclear weapons. They could undertake a series of confidence-building measures across the Indo-Pacific region, such as coordinated disaster-response and humanitarian missions. They could work together to improve global financial stability, especially by agreeing to reschedule the debts of developing countries hit hard by the pandemic. And they could jointly build a better system for distributing COVID-19 vaccines in the developing world.

Human rights activists in Hong Kong protest in support of Xinjiang’s Uighur community, December 2019
Lucy Nicholson / Reuters
That list is far from exhaustive. But the strategic rationale for all the items is the same: it is better for both countries to operate within a joint framework of managed competition than to have no rules at all. The framework would need to be negotiated between a designated and trusted high-level representative of Biden and a Chinese counterpart close to Xi; only a direct, high-level channel of that sort could lead to confidential understandings on the hard limits to be respected by both sides. These two people would also become the points of contact when violations occurred, as they are bound to from time to time, and the ones to police the consequences of any such violations. Over time, a minimum level of strategic trust might emerge. And maybe both sides would also discover that the benefits of continued collaboration on common planetary challenges, such as climate change, might begin to affect the other, more competitive and even conflictual areas of the relationship.

There will be many who will criticize this approach as naive. Their responsibility, however, is to come up with something better. Both the United States and China are currently in search of a formula to manage their relationship for the dangerous decade ahead. The hard truth is that no relationship can ever be managed unless there is a basic agreement between the parties on the terms of that management.

GAME ON
What would be the measures of success should the United States and China agree on such a joint strategic framework? One sign of success would be if by 2030 they have avoided a military crisis or conflict across the Taiwan Strait or a debilitating cyberattack. A convention banning various forms of robotic warfare would be a clear victory, as would the United States and China acting immediately together, and with the World Health Organization, to combat the next pandemic. Perhaps the most important sign of success, however, would be a situation in which both countries competed in an open and vigorous campaign for global support for the ideas, values, and problem-solving approaches that their respective systems offer—with the outcome still to be determined.

Success, of course, has a thousand fathers, but failure is an orphan. But the most demonstrable example of a failed approach to managed strategic competition would be over Taiwan. If Xi were to calculate that he could call Washington’s bluff by unilaterally breaking out of whatever agreement had been privately reached with Washington, the world would find itself in a world of pain. In one fell swoop, such a crisis would rewrite the future of the global order.

A few days before Biden’s inauguration, Chen Yixin, the secretary-general of the CCP’s Central Political and Legal Affairs Commission, stated that “the rise of the East and the decline of the West has become [a global] trend and changes of the international landscape are in our favor.” Chen is a close confidant of Xi and a central figure in China’s normally cautious national security apparatus, and so the hubris in his statement is notable. In reality, there is a long way to go in this race. China has multiple domestic vulnerabilities that are rarely noted in the media. The United States, on the other hand, always has its weaknesses on full public display—but has repeatedly demonstrated its capacity for reinvention and restoration. Managed strategic competition would highlight the strengths and test the weaknesses of both great powers—and may the best system win.