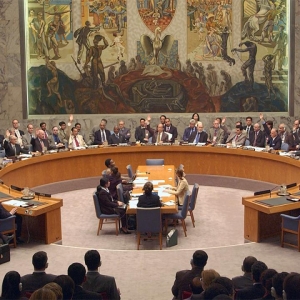 On July 10, the UN Security Council passed Resolution 2585 to renew humanitarian access to northwest Syria from Turkey for six months, with the option of extending it for an additional six months thereafter. The outcome allows both the United States and Russia to declare victory on some level. Washington and its partners have temporarily averted a humanitarian disaster, though that success hinged on the Biden administration’s decision to define limited goals and curtail its engagement on bigger-picture questions about a future political settlement. Meanwhile, Moscow has retained its position of strength in Syria, and U.S. officials have signaled their unwillingness to change that status quo. Although aid will continue to flow for now, it is unclear whether Washington can or will use the momentum to push for a broader diplomatic settlement. Moscow backed off from trying to end the UN’s cross-border mandate entirely, but the full spectrum of concessions Washington made to prevent that remains unclear.

Another Stopgap
In theory, humanitarian assistance is apolitical, and international law stipulates that such access should be unimpeded. In practice, getting aid to the Syrian people has been a recurring source of diplomatic conflict between Russia and the West.

The UN established the cross-border humanitarian program in 2014 after assistance groups warned that Bashar al-Assad’s regime was manipulating aid provision to reward allies and starve out opposition-held cities. Initially, the Security Council approved four crossings to deliver authorized aid: one from Jordan, one from Iraq, and two from Turkey. These crossings were renewed repeatedly until 2020, when Moscow used its veto power to whittle them down to two and then just one: Bab al-Hawa in rebel-held Idlib province. The closures served Russian interests by putting economic strain on opposition-held territory and bolstering the pro-Assad narrative that aid sent through non-regime channels violated Syria’s “sovereignty.” Moscow refused to acknowledge Assad’s crimes against his people or admit that state sovereignty is not a blank check for abusing human rights through denial of aid and other violations. With the exception of China, other Security Council members have rejected Moscow’s argument and noted that closing the last crossing would lead to mass starvation given the logistical and political challenges of delivering “cross-line” aid from Damascus to opposition areas.

Nevertheless, the Kremlin’s veto threats have continued—every six to twelve months, Russian officials declare that the war is “over” and that the time has come to end the cross-border mandate entirely. And each year they edge closer to this goal. Thus far, a herculean UN-led effort has staved off disaster for the 4 million Syrians crowded into Idlib, but their very lives would be at immediate risk if the last crossing were shut down. Roughly 1,000 truckfuls of aid have been delivered there every month for the past year, and basic supplies like food and potable water are sent in daily alongside medical equipment and other life-saving aid.

From a Year to Six Months
The new resolution guarantees that Bab al-Hawa will remain open for at least six months, and likely a full year once the UN secretary-general issues a “substantive report” on “transparency in operations” and “progress on cross-line operations” to deliver aid from Damascus to opposition-held areas (see below). After the resolution was adopted, U.S. ambassador Linda Thomas-Greenfield stated that the secondary extension in January will not require another round of voting at the Security Council.

Yet the resolution does not restore any previously closed crossings. That was a key request of the United States and other council members, but Russia’s UN ambassador has maintained since June that it is a “nonstarter.”

Another compromise was the authorization of a UN investigation into how aid is delivered to Idlib and how it is used after it arrives. Moscow often contends that cross-border aid may be mislabeled by senders or appropriated by opposition groups, and that rebels are blocking cross-line deliveries from Damascus for political reasons. Yet Ambassador Thomas-Greenfield indicated in June that the regime was largely to blame for this situation: “Since the closing of Bab al-Salam, not a single cross-line convoy has succeeded in reaching Idlib. The Assad regime has blocked at least half of the UN convoys in areas they control. There are places in Syria that haven’t seen a cross-line shipment in 18 months.” Despite being established to appease Russia, however, the UN investigation will also provide an opportunity to shed further light on the Assad regime’s politicization of aid routed through Damascus. The real question is whether Moscow will accept the secretary-general’s conclusions, since it has often rejected past UN reports on the Syria war.

In yet another concession to Russia, Resolution 2585 also endorses “early recovery” reconstruction projects that the United States and its partners had previously made conditional on progress toward a broader political settlement. More specifically, the resolution encourages the International Committee of the Red Cross “and other organizations” to begin early recovery work on providing shelter to displaced Syrians. This phrasing is vague, and no one denies the dire situation that many civilians currently face. Yet the Western countries that provide around 90 percent of UN agency funding previously opposed this move and expressed concern about diversion of aid resources by Assad.

The compromise vote was preceded by nearly four months of intense negotiations between member states as well as strategic posturing by Russia. Despite the lack of clarity about its overall Syria policy, the Biden administration has focused intently since March on securing a renewal that expanded the number of crossings. In speeches, tweets, and closed-door meetings, officials all the way up to the president pressed for continued humanitarian access to Idlib. Meanwhile, Russia attempted to make the renewal contingent on securing concessions in other sections of the Syrian file, mainly the lifting of sanctions. It also upgraded its military presence and used selective force to emphasize its coercive power. For example, a Russian airstrike killed at least one civilian near Bab al-Hawa in March, while the Assad regime intensified its artillery shelling in recent months, striking two hospitals in opposition territory, among other targets.

Policy Recommendations
Given that the Biden administration defined the negotiations as a test of Russian willingness to cooperate with the United States on areas of mutual concern, the resolution’s significance stretches beyond Syria. Yet while functional diplomacy between the two countries is beneficial to international stability, Washington should not underestimate the consequences of making too many concessions on Syria. Its diplomatic success in New York can only last if it bolsters the balance of power it strove to establish in the lead-up to Resolution 2585.

First and foremost, this means clarifying that the language welcoming “early recovery” projects does not change Washington’s overall policy of opposing reconstruction until a political settlement has been reached. In this respect, U.S. officials should not rely solely on their bilateral channels with Russia to discuss the conflict’s non-humanitarian aspects; rather, they should work more closely with European and Arab partners to reshape the diplomatic process, for instance by connecting the Small Group on Syria (i.e., the United States, Britain, Egypt, France, Germany, Jordan, and Saudi Arabia) to the so-called Astana process (Russia, Turkey, and Iran).

Washington should also ensure that the secretary-general’s future report on cross-line aid delivery gaps is put to good use. Moscow will likely deny the report’s accuracy if it does not assign blame to rebel groups in Idlib. In response, the United States and its partners should:

Use the report to reiterate how the regime misuses and obstructs aid deliveries.
Hold the UN’s Syria coordinator accountable for the application of humanitarian principles in his relationship with the Assad regime.
Ask the secretary-general to fight collusion between UN agencies and the regime.
Support NGOs based in Damascus as they negotiate with regime institutions to maximize their independence in selecting aid beneficiaries.
At the same time, the parties need to explore responsible alternatives to the UN’s cross-border operation. Complete reliance on this mechanism is a recipe for biannual brinkmanship, with Russia extracting more and more concessions in exchange for allowing the UN to continue its lifesaving work. Perhaps most crucially, Washington should double down on developing direct ties with grassroots NGOs in Syria so that the UN mechanism is not the only way for humanitarian organizations in Idlib or elsewhere to keep the lights on.