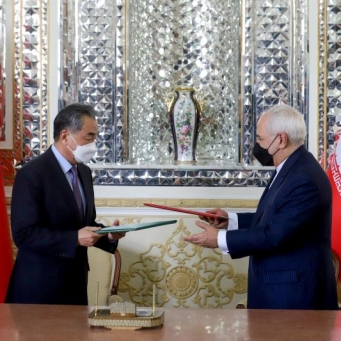 The last few years have witnessed a paradigm shift in U.S. foreign policy. The Middle East is no longer Washington’s top priority. Washington has significantly reduced the number of U.S. troops in Iraq, and U.S. President Joe Biden has pledged to focus on only a small number of objectives in the region. As this retrenchment has proceeded, analysts, columnists, and elected leaders have warned that China is poised to take the United States’ place in a part of the world where Washington has long been dominant. In the Middle East as elsewhere, the argument goes, the United States must counter China’s military power, economic clout, and ideology at every turn, lest Beijing replace Washington as the preeminent global superpower.

Even as the United States pulls back from the Middle East, some in the U.S. foreign policy community believe that the region will be among the places where a so-called great-power competition between Washington and Beijing will play out. These analysts cite China’s investment in the area, its bilateral trade deals with regional powers, its military base in Djibouti, and Beijing’s increasingly close ties to Iran as evidence of new and dangerous threats>