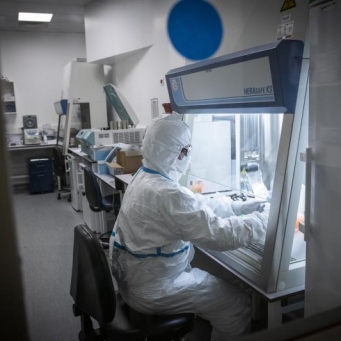 More than a year and a half into a global pandemic that has caused at least four million deaths, the world is still debating two competing hypotheses about the origins of the novel coronavirus that causes COVID-19. The first hypothesis—and until recently the dominant one—is that the virus jumped from animals to humans in a natural “spillover” event. Animal-to-human transmission has happened repeatedly throughout history. And although no animal has been identified as the culprit in this pandemic, there is evidence that species sold in Wuhan’s wet markets could have caught the novel coronavirus from a bat and then spread it to humans.

The second hypothesis, which was initially dismissed as a conspiracy theory but has gained traction in the wake of recent news reports, is that the novel coronavirus escaped via an accidental lab leak. The earliest reported cases of COVID-19 occurred in Wuhan, which is home to the Wuhan Institute of Virology, China’s highest-security lab for biohazards and an institute renowned for coronavirus research. Wuhan is also a bustling metropolis of more than ten million people—not a natural habitat for the bat colonies where coronaviruses are typically found.

Both hypotheses are plausible, but neither can be proved—in part because China has so far refused to allow a rigorous, independent World Health Organization (WHO) investigation on Chinese soil. Investigative reporting, analysis by researchers, and editorials from prominent scientists have helped to revive the lab leak hypothesis, but they are unlikely to produce a definitive answer about the origins of the virus—or to convince those who are not predisposed to accept their conclusions. A 90-day intelligence assessment that U.S. President Joe Biden ordered in May, the results of which are expected later this month, could shed more light on this question. But it is similarly unlikely to end the impasse over the source of the outbreak, since it will be seen by other nations and by multilateral institutions through the lens of the U.S.-Chinese rivalry. Few outside the United States will accept its conclusions without independent corroboration.

Stay informed.
In-depth analysis delivered weekly.
In the absence of a definitive answer, speculation and finger-pointing about the origins of COVID-19 are hindering international cooperation to end this pandemic and impeding investments in global disease surveillance and response capabilities that will be needed to prevent, detect, and fight the next one. Instead of continuing to push for a WHO investigation that is unlikely to materialize, the United States and its allies should call for an independent scientific investigation led by a coalition of national academies of science. Such a coalition, which would include the Chinese Academy of Sciences alongside the U.S. National Academy of Sciences and the academies of science of other nations, will not end the rivalry between Beijing and Washington. But it could be a more cooperative venue for investigating the virus’s origins, allowing U.S. and Chinese policymakers and scientists to begin to rebuild the technical cooperation needed to prevent future outbreaks—for instance, by building momentum for stronger global lab safety rules or by making possible tougher restrictions on wildlife trade and wet markets.

INVESTIGATIVE IMPASSE
International efforts to investigate the origins of the pandemic have reached an impasse. Biden and the other leaders of G-7 nations have called for “a timely, transparent, expert-led, and science-based” investigation by the WHO, and Tedros Adhanom Ghebreyesus, the WHO’s director general, has committed to carrying one out.

But China has steadfastly refused these calls for an in-country inquiry. Last month, Beijing rejected a plan by the WHO to audit laboratories in China, suggesting that investigators should instead look for the origins of the virus in the United States. “If the U.S. is truly transparent and accountable, it should keep an open mind like China, immediately inviting international experts to Fort Detrick and other places in the U.S. to conduct detailed investigation,” said Zhao Lijian, a spokesperson for China’s Ministry of Foreign Affairs. In recent weeks, China’s state media have doubled down on allegations and accusations that the United States is the source of the pandemic.

A BETTER WAY
In order to break the current impasse, the United States should attempt to rally like-minded countries to exhaust the other options for a credible, cooperative approach to answering the origins question. Instead of a WHO-led investigation, which is hopelessly stalled, the Biden administration should call for an independent probe by a coalition of credible scientific institutions, such as the U.S. National Academy of Sciences, the Chinese Academy of Sciences, and the Royal Society in the United Kingdom, among others, with WHO acting as an observer.

Although China has stonewalled the WHO investigation, it has responded positively to mounting international pressure—for instance, by not objecting to the resolution establishing the origins probe at the World Health Assembly in May 2020. But to increase the likelihood that China will cooperate with an independent investigation, the Biden administration should consider responding directly to Beijing’s absurd accusations that the pandemic may have originated in a U.S. military lab. So far, it has left these charges unanswered, presumably because it views them as disinformation. But Beijing has framed Washington’s silence as evidence of a guilty conscience, helping to justify its own refusal to accept a full international investigation.

Biden could call China’s bluff and allow international inspectors, including Chinese scientists, into the United States. President George H. W. Bush made a similar deal when he offered Soviet inspectors access to U.S. biological facilities in 1990 in exchange for a joint U.S.-British inspection of the Soviet Union’s Biopreparat facilities. The joint delegation faced denials, evasion, and obstruction, but it was still able to determine that the Soviet biological weapons program was offensive in nature, contrary to Soviet assertions. Washington even gained from the Russian inspection of its own biological facilities: Ken Alibek, a key member of the Soviet bioweapons program, confirmed during his delegation’s visit that he did not believe the United States had an offensive bioweapons program, even though the Kremlin’s propaganda claimed otherwise. Alibek’s defection a year later helped Washington gain even greater insight into the former Soviet bioweapons program.

The Biden administration could seek to negotiate a deal with Beijing for similar reciprocal visits. If China agrees, such visits would not only give the United States greater insight into the activities of the Wuhan Institute of Virology but potentially create an opening for a credible Chinese whistleblower to shed more light on the origins of the virus. If China refuses, the attempt would at least put the lie to Beijing’s propaganda campaign at home and abroad.

An independent coalition-led investigation, coupled with the possibility of reciprocal U.S. and Chinese inspections, will not end the rivalry between Beijing and Washington. But it might help break the current deadlock over the question of the pandemic’s origins—which in turn would help U.S. and Chinese scientists and policymakers put the answer to good use. Beijing and Washington will need to cooperate to end this pandemic and to fight the next one, by putting in place stronger global rules on lab safety and tougher restrictions on wildlife trade and wet markets. Only that will make Americans and the world safer.