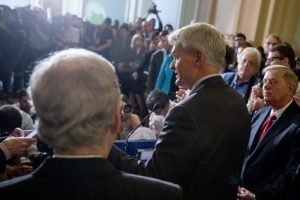 Senate Republicans have conceded defeat on their last-ditch effort to repeal and replace “Obamacare.”

The bill’s authors acknowledge they don’t have the votes ahead of a critical deadline at the end of this week.

Sen. Lindsey Graham, a sponsor of the latest, last-ditch effort, says Republicans are going to fulfill the promise they’ve made to voters and the GOP base for the past seven years.

Senate Republicans are insisting they won’t give up on repealing and replacing the Obama health care law even as they abandoned plans for a vote this week.

Majority Leader Mitch McConnell told reporters after a closed-door luncheon in which the GOP decided not to hold the vote: “We haven’t given up on changing the American health care system. We aren’t going to be able to do it this week.”

Sen. Lindsey Graham, a sponsor of the latest, last-ditch effort, said Republicans are going to fulfill the promise they’ve made to voters and the GOP base for the past seven years.

But it was clear that the GOP is moving on to the next complicated legislative priority. McConnell said: “Where we go from here is tax reform.”

Senate Republicans will not vote this week on the latest, last-ditch effort to repeal and replace Barack Obama’s Affordable Care Act.

That’s the word from senators as they emerged from a closed-door meeting on Tuesday. Sen. Jeff Flake of Arizona shook his head and said “no” when asked about plans for a vote.

The setback marks the end for the latest drive to overturn the law, a promise the GOP has made to voters for seven years.

The latest iteration of the bill was sponsored by Sens. Bill Cassidy and Lindsey Graham, but opposition from at least three Republican senators in the narrowly-divided Senate sunk the measure’s chances. Democrats were unified in their opposition

A new analysis finds that 34 states and Washington, D.C., would lose money under the newest version of the Republican health care bill.

This is despite last-minute changes to the legislation.

Overall, states would get $205 billion less in federal health care money from 2020-2026, according to the analysis from consulting firm Avalere Health, which was released Tuesday.

States that expanded Medicaid to cover low-income adults, as well as those where lots of residents have signed up for subsidized private health insurance, were more likely to be losers under the Graham-Cassidy bill.

The latest changes soften the magnitude of the funding shifts, but the end result remains similar.

Losses would grow over time. Sixteen states would gain money.

Trump tells reporters at the White House that “we’ll see what happens” on whether the Senate will vote on the plan, which has suffered from Republican defections.

Trump says he’s “very disappointed by a couple of senators,” adding, “We don’t know why they did it.”

The president says “at some point there will be a repeal and replace” of the health care law. But Republican leaders in the Senate are conceding that their prospects for repealing the law are dismal.

The Kentucky Republican spoke as he tries to decide whether to hold a vote on the latest GOP bill repealing President Barack Obama’s law. That measure seems almost certain to be defeated if a roll call were held.

The Republican legislation would transform much “Obamacare” spending into grants states could spend on health programs with few constraints.

McConnell called that proposal a “stark contrast” to a plan by Vermont independent Sen. Bernie Sanders. That measure is backed by many Democrats and would create government-run health insurance.

McConnell says Sanders’ plan would “rip” health insurance from people. He called the issue an important debate and said, “It’s one that we’ll certainly continue.”

The White House says it believes a Senate health care bill that appears headed for defeat is “still good legislation.”

Spokeswoman Sarah Huckabee Sanders says the White House is “fully committed” to improving the health care system and that the Senate bill would do that.

With no Democratic support expected, three “no” votes from Republicans would appear to doom the bill. Republicans control 52 Senate seats and Sens. Susan Collins of Maine, John McCain of Arizona and Rand Paul of Kentucky have said they will not vote for the bill.

Sanders held out hope that opposing lawmakers might change their minds, or that undecided senators — like Lisa Murkowski of Alaska — will support it.

Senate Republican leaders have conceded that prospects for passing the measure this week appear dismal.

Republican Sen. Susan Collins’ decision to oppose the GOP push to repeal President Barack Obama’s health care overhaul leaves the effort all but dead. Even party leaders concede that their prospects are dismal.

South Dakota Sen. John Thune, the No. 3 GOP Senate leader, says reviving the push would be a heavy lift.

Thune made the comment after Collins joined a small but pivotal cluster of Republicans saying they’re against the measure.

GOP Sens. John McCain of Arizona, Rand Paul of Kentucky and Ted Cruz of Texas are also against the legislation, though Cruz aides say he might back it if changes are made. Alaska’s Lisa Murkowski is a Republican who’s undecided.

With their narrow Senate majority, defections by three GOP senators would doom the bill.