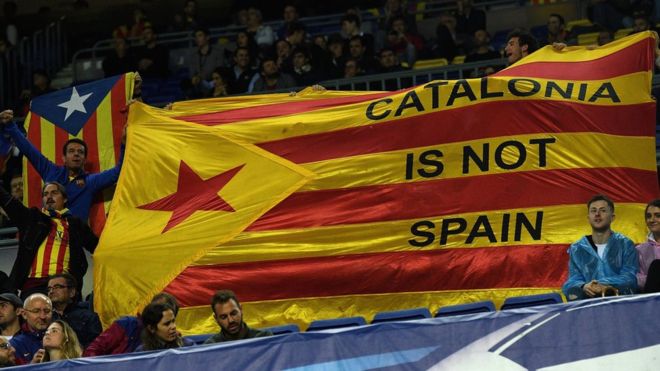 Spain is to start suspending Catalonian autonomy on Saturday, as its leader threatened to declare independence.
The government said ministers would meet to activate Article 155 of the constitution, allowing it to take over running of the region.
Catalonia’s leader said earlier the region’s parliament would vote on independence, backed in a disputed referendum on 1 October, if Spain “continues repression”.
Some fear the moves could spark unrest.
“The Spanish government will continue with the procedures outlined in Article 155 of the Constitution to restore legality in Catalonia’s self-government,” the government statement said.
“It denounces the attitude maintained by those in charge of the Generalitat [Catalan government] to seek, deliberately and systematically, institutional confrontation despite the serious damage that is being caused to the coexistence and the economic structure of Catalonia.
“No-one doubts that the Spanish government will do all it can to restore the constitutional order.”
Article 155 of Spain’s 1978 constitution, which cemented democratic rule after the death of dictator General Franco three years earlier, allows Madrid to impose direct rule in a crisis but it has never been invoked.
Catalan views: Unionists v separatists
Catalan crisis in 300 words
Reality Check: Would Catalonia be a viable country?
Political leaders in Madrid and Barcelona have been engaged in a tense stand-off since the disputed referendum, which Catalan leaders say resulted in a “Yes” vote for independence but which Spain’s supreme court regards as illegal.

What is Madrid’s position?
Spanish Prime Minister Mariano Rajoy set the deadline of 10:00 local time (08:00 GMT) for Catalan leader Carles Puigdemont to offer a definitive answer on the independence question, and called on him to “act sensibly”.
“It’s not that difficult to reply to the question: has Catalonia declared independence? Because if it has, the government is obliged to act in one way, and if it has not, we can talk here,” he said in parliament on Wednesday.
The man who wants to break up Spain
This was the second and final deadline, as Madrid says Mr Puigdemont on Monday failed to clarify whether he had declared independence.
What happens now?
Mr Rajoy is due to attend an EU summit in Brussels on Thursday afternoon.
On Saturday the government will be expected to draw up a list of specific measures under Article 155 of the constitution, launching the transfer of powers from Catalonia to Madrid.
The article says: “If a self-governing community does not fulfil the obligations imposed upon it by the constitution or other laws, or acts in a way that is seriously prejudicial to the general interest of Spain, the government… may… take all measures necessary to compel the community to meet said obligations, or to protect the above-mentioned general interest.”

It is thought the measures implemented could range from taking control of the regional police and finances to calling a snap election.
Spain’s Senate, controlled by Mr Rajoy’s conservative Popular Party (PP) and its allies, would then have to approve the list. The timetable for this process is imprecise.
Analysts say Article 155 does not give the government the power to fully suspend autonomy, and it will not be able to deviate from the list of measures.
For Madrid this is about upholding the rule of law in Catalonia, protecting the Spanish constitution and disciplining what it sees as an unruly, disobedient devolved government, the BBC’s Tom Burridge in Barcelona reports.
However, the central government wants to minimise the risk of large-scale demonstrations, our correspondent says. Civil servants and government lawyers have thought long and hard about what measures to adopt and when and how they should be implemented.
Where does this leave the Catalan leader?
Mr Puigdemont said in a letter to Mr Rajoy on Thursday morning that the independence declaration remained suspended but the Catalan regional parliament, where he has a majority, would vote on independence if Madrid refused to hold talks and “continues repression”.
But he faces an uphill struggle – it is likely that senior figures in charge of internal security in Catalonia could be dismissed, and control of the region’s police force could pass to Madrid.
The regional parliament could also be dissolved.

One Spanish newspaper has reported this week that Mr Puigdemont might nominally remain in his job, but Madrid would aim to take control of many of his duties and powers.
Ultimately the process could end in regional elections but the Spanish constitution does not impose any time limit.
How much support does Mr Rajoy have in parliament?
As well as the ruling PP, Mr Rajoy has the support of the centre-left Socialists and centrist Cuidadanos (Citizens) on the Catalan crisis.
Between them they control at least 254 out of 350 seats in the lower house – the Congress of Deputies – and at least 214 out of 266 seats in the Senate.

However, there have been sharp exchanges in recent days, with the head of one left-wing Catalan party accusing the government of choosing humiliation, repression and fear over dialogue.
The radical left-wing Podemos party and other regional leftist groups are also opposed to the government position, and have protested against the detention of Catalan activists.