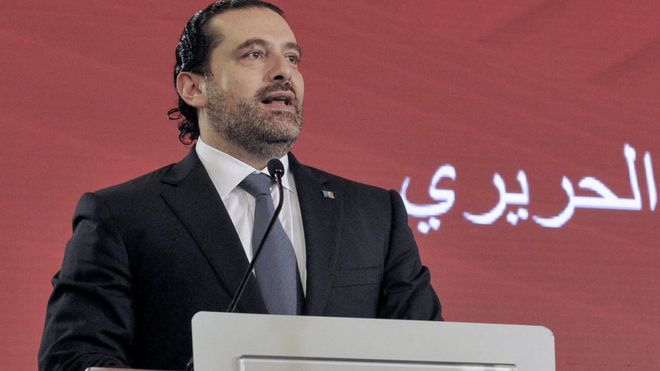 Iran says the surprise resignation of Lebanese Prime Minister Saad al-Hariri is part of a plot to stoke tensions in the region.
An adviser to Iran’s supreme leader accused the US and Saudi Arabia of being behind the move.
Mr Hariri, in a televised broadcast from Saudi Arabia, accused Iran of sowing “fear and destruction” in several countries, including Lebanon.
He said he was stepping down because he feared for his life.
Mr Hariri’s father, former Prime Minister Rafik al-Hariri, was assassinated in 2005.
Correspondents say his sudden departure plunges Lebanon into a new political crisis and raises fears that it may be at the forefront of the regional rivalry between Shia power Iran and Sunni stronghold Saudi Arabia.
Following the statement on Saturday, Iranian politicians lined up to denounce Mr Hariri’s assertions.
“Hariri’s resignation was done with planning by [US President] Donald Trump and Mohammed bin Salman, the Crown Prince of Saudi Arabia,” said Hussein Sheikh al-Islam, adviser to Iranian Supreme Leader Ayatollah Ali Kahmenei.
Iranian foreign ministry spokesman Bahram Qasemi, quoted by the official Irna news agency, said Mr Hariri’s departure was aimed at creating tension in Lebanon and the region.
He said Mr Hariri had repeated “unrealistic and unfounded accusations” and had aligned himself with “those who want ill for the region”, singling out Israel, Saudi Arabia and the US.
Mr Hariri, whose family is close to Saudi Arabia, has been prime minister since December 2016, after previously holding the position between 2009 and 2011.

“We are living in a climate similar to the atmosphere that prevailed before the assassination of martyr Rafik al-Hariri,” he said in the broadcast from the Saudi capital Riyadh.
“I have sensed what is being plotted covertly to target my life.”
Rafik al-Hariri was killed by a bomb in 2005 in an attack widely blamed on the Iran-backed Shia movement Hezbollah, which wields considerable power in Lebanon.
Addressing “Iran and its followers” he said Lebanon would “cut off the hands that wickedly extend into it”.
What is Hezbollah?
Read more about Lebanon
Mr Hariri has made several recent visits to Saudi Arabia. His announcement came a day after a meeting in Beirut with Ali Akbar Velayati, an adviser to Ayatollah Ali Khamenei.
After taking office last year, Mr Hariri promised a “new era for Lebanon” after two years of political deadlock.
The coalition government he led brought together almost all of the main political parties in Lebanon, including Hezbollah.