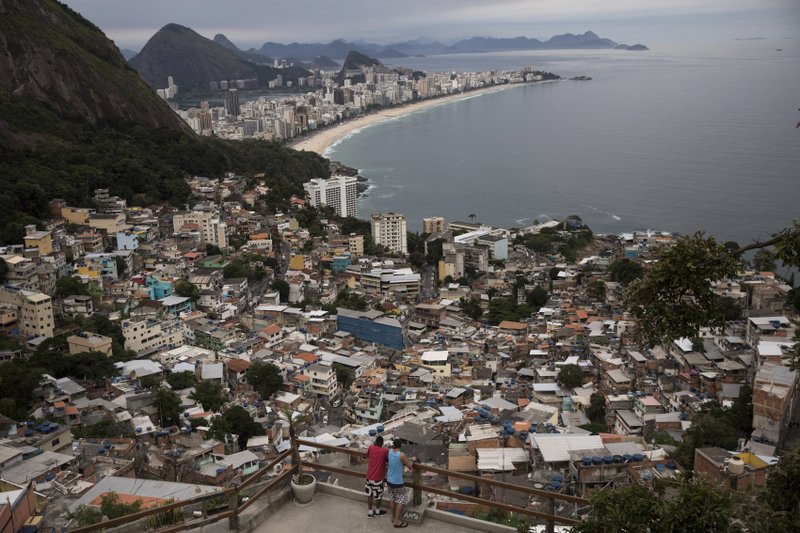 RIO DE JANEIRO (AP) — As authorities in Brazil tackled crime earlier this decade, opening Rio de Janeiro’s hillside favelas to tourists seemed like a winning idea. The views are breathtaking, the slum residents could cash in, and foreign visitors would see another part of the city — not just Copacabana beach.

Now soaring violence in the hillside communities is rekindling a concern: Are favelas safe to visit?

Most famously depicted in the Oscar-nominated movie “City of God,” Rio’s favelas have long been known for drugs and crime. But the clusters of makeshift housing that run up Rio’s hillsides are also the birthplace of the city’s Carnival parade, samba music and street art.
As part of preparations that began in 2008 for hosting the Olympic Games, authorities pushed to make these once no-go areas safer by targeting ruling drug gangs. The current national economic crisis has exacerbated deep inequality and resulted in funding cuts for security forces, however, and authorities admit they have again lost control of most slums they once declared “pacified.”

“The question is very complex to simply say if it is safe or not,” said Marcelo Armstrong, who has been taking tourists to favelas for 25 years. “Depends where, depends what day, depends what circumstance. That’s the reality of Rio now.”

This year, Rio has seen an estimated average of 15 shootings a day involving police and heavily armed gangs. Hundreds of civilians, many of whom are residents of the favelas, have been killed or wounded in the crossfire.

A study conducted by the country’s National Confederation of Commerce and Tourism said the increase in crime was responsible for a loss of $200 million to Rio’s tourism sector between January and August of this year. In 2015, Rio made $5 billion from tourism.

While tourists have occasionally been shot after accidentally veering into favelas, the recent death of a Spanish tourist at the hands of police put a spotlight on insecurity in Rio and its slums.

In October, police opened fire on a car carrying Maria Esperanza Jimenez Ruiz and her relatives as they left a walking tour of the city’s most populous slum, Rocinha, which has been at the center of a bloody battle between rival gangs and authorities.

Officers claimed her driver failed to stop at a checkpoint and drove a vehicle with darkly tinted windows that were not identified as belonging to a tour company. The driver said he never saw the checkpoint and was not asked to stop. Two police officers are being investigated on suspicion of manslaughter, and authorities have announced they will press criminal charges against a tour guide and agency for failing to inform the tourists of the risks involved in visiting the slum.

“I understand the tourists’ curiosity and I understand the desire of a community to be part of the city,” said Valeria Aragao, who heads Rio’s tourism police and is investigating the case. “What I don’t understand is the irresponsible attitude of a tourism agency and a guide to choose and encourage a visit to this place — when even residents feel unsafe.”

Aragao acknowledged tour guides do not currently have access to official police bulletins and instead rely on news reports and local favela guides to evaluate if a slum is safe. In response to the shooting, tourism and security authorities have created a committee to regulate tourism in slums.

The city council is also considering a measure that would require agencies offering favela tours to get liability insurance and inform local police before each tour. The agencies would have to work with a local guide and drive tourists in an identified vehicle, without tinted windows.

Armstrong, the favela tour guide, said he worries authorities are transferring the blame for the tourist’s death from the police to the tourism sector.

“There will be a day when travel agencies will be accused of exposing their clients to risk because they are walking in Copacabana,” Armstrong said. “If the government is not able to guarantee security, it is their fault and nobody else’s.”

Just days after the Spanish tourist was killed, Michiel Wijnstok, a tourist from the Netherlands, went on Armstrong’s tour in Vila Canoas, a favela that borders the elite Gavea Golf Club.

“You hear the stories,” said Wijnstok, a finance manager who was in Rio for the first time. “But I wanted to see it with my own eyes.”

On the hourlong tour, the group strolled down alleys shadowed by tangled electricity cables and listened to Armstrong explain the history of the slums and their architecture. Part of the $25-a-person charge goes to two charity-run schools in the slums.

At the tour’s end, the group ordered caipirinhas at a bar and exchanged smiles with the locals, who thanked them for their business.

For many favela residents, tourism is a lifeline in neighborhoods where formal jobs are scarce.

Andreia Cavalcante sells snacks and drinks to foreigners and their drivers from a stand in the Vidigal slum, just up the hill from the ritzy Leblon neighborhood. On a typical weekend, Cavalcante used to make $480 (1,600 reals) selling pasteis — a savory pastry filled with meat or cheese. Now, she makes about half that.

“This is due to the community being a bit unstable with all that is happening,” she said.

Near the top of Vidigal, tourists can stay at the Mirante do Arvrao hotel, where a suite with a panoramic view of the city and ocean costs $170 a night. On the weekends, bars in the neighborhood offer live samba music and are packed with both Brazilians and foreigners.

Daniel Graziani, an owner of the hotel who lives in Vidigal with his wife and 1-year-old daughter, said he believes there is a bright future for tourism in favelas, but security concerns are growing.

Just recently, he offered to book a couple arriving from Paris into another hotel because of a police operation in Vidigal. The clients demurred. The operation ended after a couple of hours, and the couple had a safe stay at the Mirante do Arvrao.

Graziani thinks it is premature to say it is no longer safe to visit favelas and believes there is a future for tourism at Vidigal, despite the turmoil. He still offers a “Favela Experience” package in which tourists can spend the day learning how to make feijoada, a bean and meat stew, or fly a kite known as “pipa,” which is typical in the favelas.

“People are still interested in another type of tourism that goes beyond the mainstream,” he said.