As part of the directives of Prime Minister Haidar al-Abadi, the Iraqi Ministry of Finance is working to secure salaries, streamline expenses, and do not harm the citizen’s bread. Abadi’s march is characterized by the lack of exploitation of the Iraqi state budget for electoral propaganda, unlike previous governments that exploited the budget funds for personal interests and electoral propaganda such as the distribution of land and appointments without right or rely on efficiency, and strengthen some of their members for their communal influence.
The Ministry of Finance issued a document on the disbursements and appointments for 2018, which authorizes the ministries and departments not connected to the Ministry and the governorates and its councils the authority to spend during the month of January 2018, by (1/12) of the actual expenses for the year 2017 to repay the obligations and security expenses ; .
And the Ministry of Finance called on to stop the appointments of all ministries and entities not associated with the Ministry, and all governorates and its councils, to be considered later after the enactment of the Federal Budget Law 2018.
It also called for stopping inter-ministerial transfers, allowances and promotions for members of the affiliated departments, calculating the period of political expulsion, serving of the legal profession, serving the contract, the press service and the jihadi service, from 1/1/2018.
The Iraqi Prime Minister, Haidar al-Abadi directs the advanced cadre in the Ministry of Finance to conduct a thorough review of the proposal for the federal budget for the year 2018, and discuss it, and further reduce of operational expenses for the three presidencies and ministries and entities that are non-linked to the Ministry to the minimum to ensure basic expenses and on the top salaries wages, for all workers in the state, pensions, salaries and other wages, and to secure the salaries of social protection and ration card, and to maintain the requirements of security, defense and medicine.

Abadi stressed “securing international and national commitments in the payment of loan dues and benefits, continuing to secure the receivables of contractors, working to enhance non-oil revenues by activating various activities and increasing productivity, and confirming the revitalization of the private sector to enable it to perform its role in improving economic performance and increase its contribution to national GDP “.
The former oil minister, Adel Abdul Mahdi, announced that the budgets of Iraq since 2003 to date amounted to 850 billion dollars, but corruption made the task of taking advantage of these allocations almost impossible.
The Committee on Economy and Investment parliamentary talked about the budget next year and said that “the federal budget for 2018 will include the implementation of the conditions of the International Bank and Monetary Fund on Iraq, which was put in exchange for lending to fill the budget deficit due to low oil prices.

It added during a press statement that “the next budget will be austerity like previous ones,” explaining that “the reduction of expenditures will be an important program in the budget, and this paragraph includes in particular the three presidencies of legislative, executive and judicial.”
It pointed out that “the budget next year will be a budget programs and not items as in the previous financial budgets.”
The former oil minister, Adel Abdul Mahdi confirmed this matter and said in an article on (October 25) that “Iraqi budgets are based on an old structure, deepening the country’s administrative and economic crisis .Unless we see radical surprises, the 2018 budget will be similar to the 2017 budget, bearing the legacy of its predecessors and structures, with no final accounts and profit and loss account.

He explained that the traditional budget structure based on public expenditure ,it is classified administratively, that is, public expenditure is distributed to departments and ministries that its budgets enter in the general budget in the form of appropriations or annual allocations, and then these annual amounts classified that are allocated to each administrative unit in a qualitative form, and according to the purpose of the expenditure called expenditure items or spending items and are often similar.

As for program and performance budgeting, it cares for the categorization of the budgets of the administrative units to functions and tasks, and then major and other sub programs , linking them to the financial statement .The performance budget provides the management with precise measurement methods such as unit cost, measurement of work and performance rates, according to the newspaper.
“The estimated exported quantities will also be close to the 2017 budget of 3.750 million barrels per day (3.2 from the south and center, 300 from the north and 250 from the region),” he said. “That if the export of the North and Kurdistan oil was fulfilled for the benefit of the federal treasury.
Which will make the oil resources higher in a certain percentage than the estimates of 2017 (68 trillion dinars), because of the shifts of the Turkish position and the introduction of North oil (and the possibility of Kurdistan also), and the possibility of export directly through Vishkhabur / Ceyhan after the liberation of Mosul.

Austerity budget and some figures will vary, but trends will remain the same, in terms of imports, expenditures and results. ”

A member of the parliamentary economy committee, Noura Jabari, optimistic views about the budget next year, where she said that “oil prices rose during the last two days, especially that the Iraqi oil differs 6 degrees from Brent oil and thus will save more money and will reduce the budget deficit.”
With regard to salaries of employees, the deputy said, “The parliamentary committees are currently discussing with the Council of Ministers the subject of salaries of employees, but I do not think there will be deductions in the next budget,” noting that “the appointments in the budget of the next year will be confined to only three ministries are: Medicine, Education and Defense “.
The economist, Basim Antoine predicted that “the budget of 2018 is no different from the budget of the last year in terms of austerity and the trend to reduce expenses and maximize resources.”
He pointed out that “the good thing in the new budget is to rely on other sources other than oil ie internal sources for the revenue,” noting that “there are expectations of the arrival of the price of a barrel of oil to $ 60, which will be reflected on budget funds directly.”
“The government’s control over Kirkuk oil will inject additional funds into the budget,” he said. “The latter will rely on programs and plans to reduce poverty and reconstruction programs, not just an operational budget.”
Balance within international agreements:
• Iraq agreed with the International Monetary Fund (IMF) experts on the draft budget for 2018, in line with the credit agreement approved by the IMF in July, according to a statement by the International Foundation.
• Iraq has agreed with the Executive Board of the IMF for the 2016 credit standing of $ 5.34 billion to support the government’s economic reform program.
The program supported by IMF in Iraq aims to meet the urgent needs of balance of payments, and reach expenditure consistent with the decline in world oil prices, and ensure that debt remains within sustainable limits.
Budgets in Iraq went from $ 32 billion to over $ 100 billion in previous years, but were exhausted in covering operating expenses, which accounted for more than 78%. The rest did not make use of real development or direct investment because of financial and administrative corruption.

Austerity budget 2018
The documents of draft law for the general budget of Iraq 2018 revealed the total value and the proportion of deficit, in addition to the proportion of Kurdistan, amounting to 12.67%.
According to the documents, the value of the budget amounted to 85 trillion and 331 million dinars, calculating by 43.4 dollars per barrel of oil, and a production capacity of 3 million and 888 thousand barrels.
The deficit in the budget, according to documents 22 trillion and 782 million and 913 thousand and 506 dinars.
The documents revealed that the proportion of Kurdistan has become in this budget only 12.67%.
the parliamentary economic and investment committee confirmed “The federal budget for 2018 will include the implementation of the conditions of the Bank and the International Monetary Fund on Iraq, which was put in exchange for lending to fill the deficit in its budget due to the decline in oil prices.”

He pointed out that “the good thing in the new budget is to rely on other sources other than oil, ie internal sources for the revenue,” noting that “there are expectations of the arrival of the price of a barrel of oil to 60 countries, which will be reflected on the budget funds directly.”
He added that “government control of Kirkuk oil will pump additional funds to the budget, as the latter will rely on programs and plans to reduce poverty and reconstruction programs and not only operational budget.”
The following document 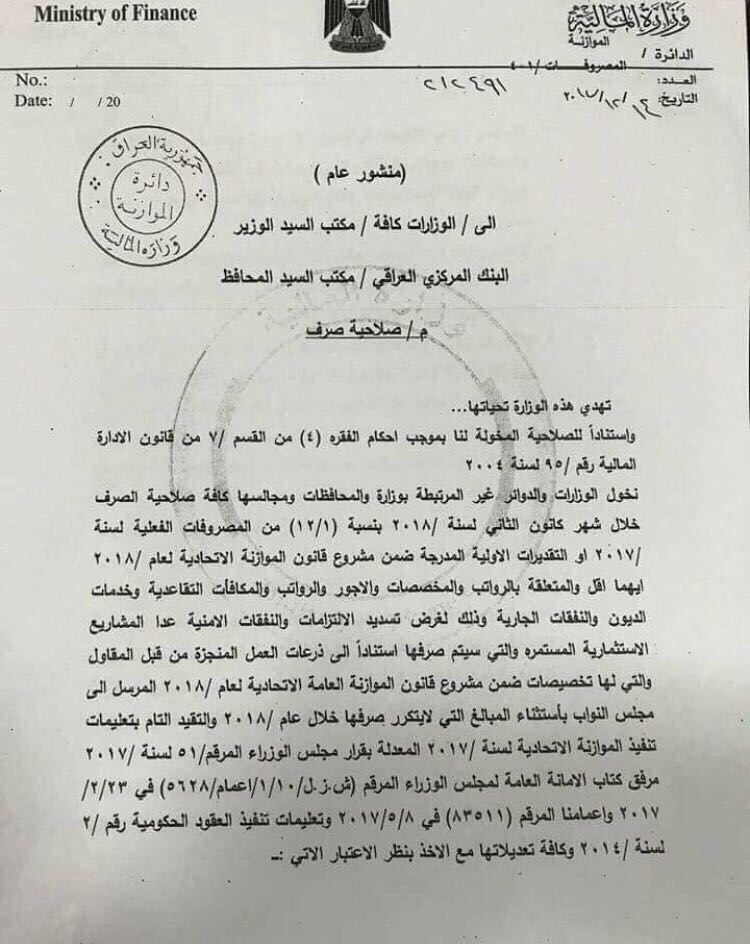 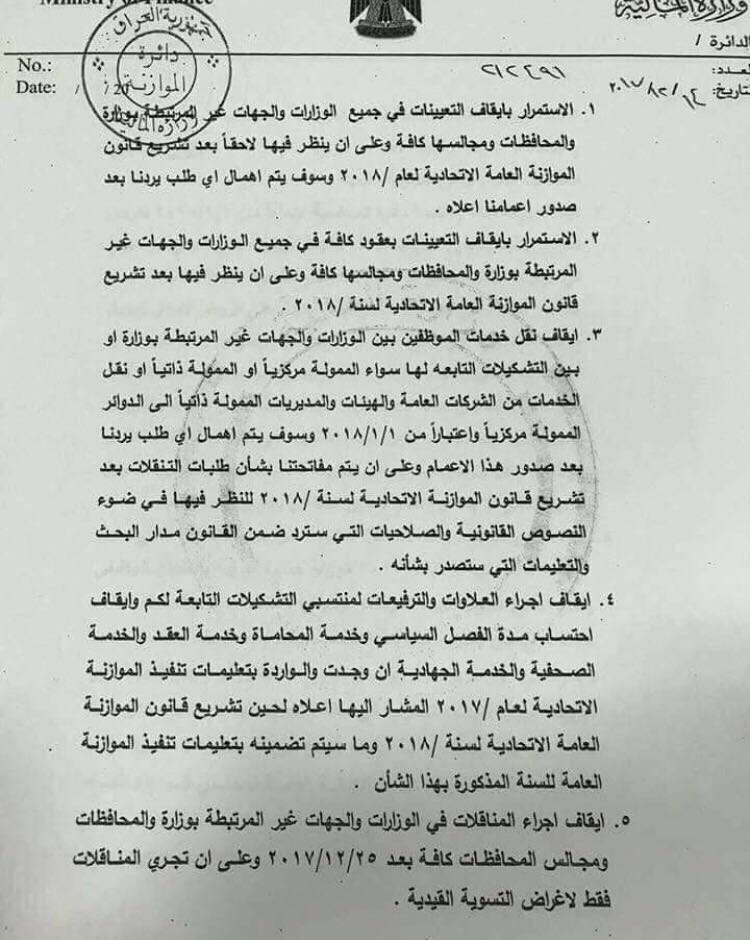