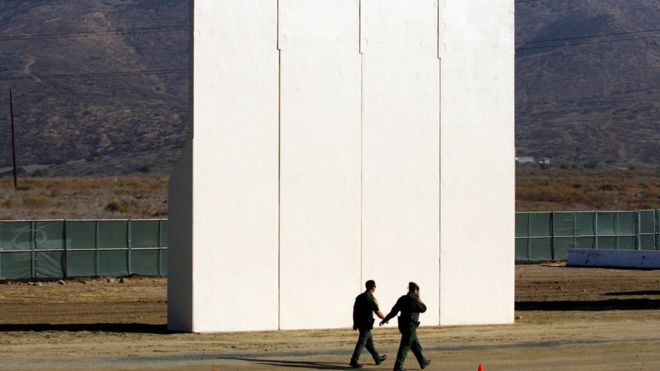 It comes after his chief of staff, John Kelly, told Fox News that the president’s opinions had evolved since his original campaign promises about its construction and funding.

The president tweeted to say Mexico would still “directly or indirectly” pay for the wall.

Mr Kelly had also reportedly described the president as “uninformed” when he made campaign promises about a wall. The comments were overheard during an immigration meeting on Wednesday, according to US media.

Immigration has become a key issue between lawmakers, and the White House is currently risking a federal government shutdown from midnight on Friday.
Why does the wall matter now?

Congress faces the deadline to pass a stopgap measure that would fund federal agencies until next month.

Democrats want the bill to include protections for immigrants who entered the US illegally as children, known as “Dreamers”.

The challenges in creating a border wall
The good, bad and ugly in Trump’s first year

Republican President Trump has been fighting to scrap the Deferred Action for Childhood Arrivals (Daca) programme.

However, he had signalled he was ready to make a deal to help the Dreamers, in return for funding for border-security plans, which include building the wall along the Mexican border.

Bipartisan immigration talks had sounded promising until it was reported last week that Mr Trump had dubbed certain nations “shitholes” during legislative negotiations.
How have the wall plans changed?

Mr Kelly said the administration was now looking at creating a wall across 800 miles (1,300km) of the 3,100km stretch. He said this would include improving existing fences.

During his election campaign, Mr Trump had also insisted Mexico would pay for it in its entirety.

Mr Kelly said they were now looking at alternative ways to raise funds, including via possible visa fees or renegotiating the Nafta trade deal.

“Campaigning is very different from governing,” he said in the Wednesday night interview.

Earlier, other US media reported that Mr Kelly had privately told a group of Democrats from the Congressional Hispanic Caucus that President Trump had not been fully informed when he came up with his wall plans.

Mr Kelly was quoted as saying that he had tried to persuade the president to change his position on the issue.