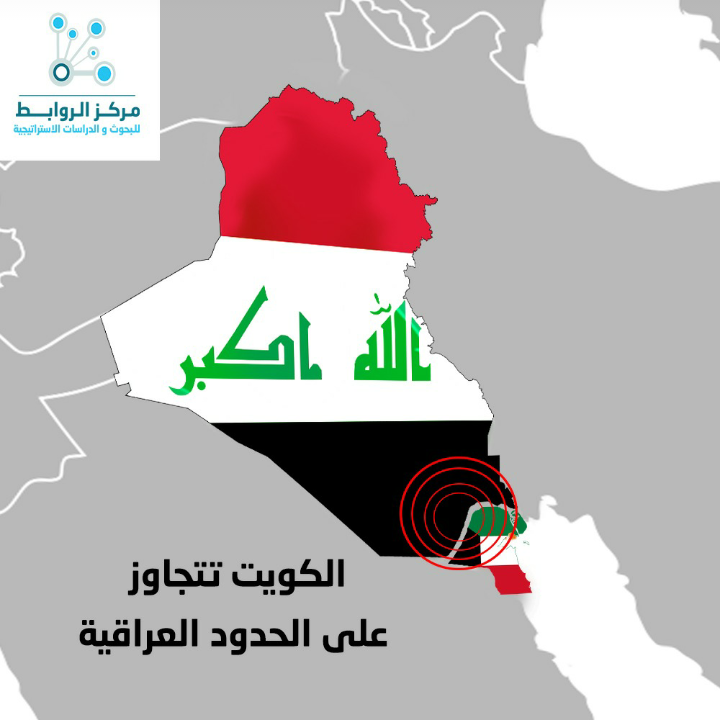 The problem of the border between Iraq and Kuwait dates back to the early 1930s when Britain asked Iraq to demarcate the border with Kuwait in order to gain independence and join the League of Nations. In 1932, Iraqi Prime Minister Nuri al-Said sent a letter to the British authorities on July 21 1932 includes a detailed description of the land border between the two countries, and the area of Al-Mutlaa is the border with Kuwait.
Continuation of border problem
The problem of the maritime and land borders between Iraq and Kuwait continues to cast a shadow over the course of relations between them and with the Gulf States due to the consequences of investing the results of the Second and Third Gulf Wars in 1991 and 2003 in favor of Kuwait in imposing its point of view and interests in demarcating its border with Iraq especially in the expansion of its control over the waterfront in Iraqi Khor Abdullah which was confirmed by a UN committee in international resolution No. 833 of 1993.

The territorial waters of the riparian States of the north of the Arabian Gulf are interrelated and have certain specificities where it is difficult to apply the 1982 United Nations Convention on the Law of the High Seas without the agreement of all the concerned states.

Iraq noted that those proposals did not provide a full balance between views that might be adopted by each party during the demarcation process and that, as long as it had no role in selecting experts, it would not be able to pre-assert the fact of their independence.
Hence, its opinion in the context of the demarcation process will be represented by only one member out of five members who are realistically from the international coalition.
Security Council
The Security Council, on the basis of the demarcation of borders, imposed the use of the term “appropriate material”, including a British map drawn up in 1989-1990 by the Director General of the United Kingdom’s Military Survey, and was adopted by the Security Council as a document at the request of the Permanent Representative of the United Kingdom to the United Nations in its letter of 28 March 1991, five days before the adoption of resolution 687 (1991).
Notably there is no legal basis for Iraq’s non-involvement in its drawing, non-recognition or approval in any way , so legally the Security Council can not adopt the “map” referred to in resolution 687 (1991) as the basis for demarcation.
Therefore, the inclusion of the map by the Security Council in the appropriate article for the purposes of demarcation would mean a pre-conceived judgment on the route of the boundary line on the ground and prior to the demarcation process against the interests of Iraq without any basis or legal consideration for the adoption of a map drawn up by the Director General of the United Kingdom ‘s military survey in 1989-1990, and it was better and more lawful “to adopt maps or drawings drawn or shared by the concerned parties in demarcation, Iraq and Kuwait.
The process of demarcation of the maritime boundary between Iraq and Kuwait was discussed by the ICRC established pursuant to paragraph 3 of resolution 687 (1991), issued by the Security Council at its 3rd meeting, held in Geneva from 12 to 17 May 1991.
During the discussion, the Chairman of the Committee Mukhtar Kusuma Atmaga (Indonesia) expressed his view that, given the nature and extent of the Commission’s mandate, it would be difficult to deal with demarcation of the maritime boundary.
This is due to the fact that the said mandate did not authorize the Commission to deal with the border route beyond the point of connection between Khor al-Zubair and Khor Abd Allah (ie, beyond that point to the sea) unless the parties (Iraq and Kuwait) agree otherwise and the Commission was not able to expand the limits of its mandate on its own responsibility.
The Chairman of the Committee did not hesitate to reveal the Kuwaiti pressure on the work of the Committee and intervene in it, which was exercised on the Assistant of the Legal Advisor to the Secretariat of the United Nations, and the two neutral experts in order to get them to adopt Kuwait’s position regarding the demarcation of the maritime border.
As its work was taking place in special circumstances following Iraq’s invasion of Kuwait and in accordance with resolution 687 (1991) and the report of the Secretary-General of the United Nations on the implementation of paragraph 3 of that resolution.
The text of resolution 733 (1992) and the basic factual information of the Committee’s discussions unequivocally reflect the organized and coordinated efforts of Kuwait and certain secretariats, as well as certain Member States of the Security Council (the United States and Britain) to guide the work of the Committee contrary to the mandate given to it as defined by the Security Council itself in resolution 687 (1991) and the report of the Secretary-General in accordance with paragraph 3 of that resolution.
That effort led to the reported result without a clear modification of the mandate of the Commission, as this would be a clear political and legal scandal.
The Chairman of the Committee, Mukhtar Kusuma Atmaja (Indonesia), announced his resignation on 20 November 1992 in his letter addressed to the Secretary-General of the United Nations, stating that the reasons were “personal” and the other, according to the text of the letter, “he has had Reservations since some time on the terms of reference to the Committee “In his letter, the Chairman of the Committee said how he had raised , on several occasions with the Legal Counsel, some aspects of the conditions of recourse to the Commission and how he had drawn attention to the fact that the boundary in the sea section (Khawr Abd Allah) was not referred to in a precise description of the boundary as contained in the exchange of letters of 1932, and therefore the appointment of borders was not available “for the Commission ,on which the basis of the demarcation of the border can be made on this part of the process.”
He disclosed how the Legal Counsel had explained to him in April 1992 that “any change in the Commission’s mandate on the part of the Security Council was beyond the bounds of this issue”.
The letter noted that this issue was discussed again between the Chairman of the Committee and the Legal Counsel in May and was again discussed in two meetings held between the Chairman of the Committee on the one hand and the Legal Counsel and the Secretary-General on the other in July and September 1992 when the Chairman of the Committee confirmed that he could not continue to work Unless there are amendments to the Commission’s mandate. ”
Then Nichlas Valtekos was appointed as the chairman of it and the sixth meeting of the Committee was held in Geneva from 14 to 16 January 1992. The Committee adopted a quick resolution confirming that the fundamental principle governing the demarcation process in Khor Abdullah should be the line passing through the center , it is to mean that the objective and purpose of the border settlement is to facilitate the passage of maritime navigation to both parties.

Wael Abdel Latif said that the Kuwaiti debts on Iraq is corrupt; Iraq should not abide by it; the end of the Second Gulf War and the exit of Iraq from Kuwait and the fall of the regime of Saddam Hussein, who entered Kuwait contrary to the opinion of the Iraqi people.

He called on Kuwait to be aware of Iraq’s interest in this agreement as long as it is an Arab country and neighbor and open the door to dialogue with Iraq and remove the state of tension by finding a way to preserve the right of Iraqis and their interests as long as there is no broad and deep outlet that Iraq can be linked to international maritime navigation, and on the contrary ,the region will remain a focus of conflicts and disagreements that will lead to wars and destruction in the end.