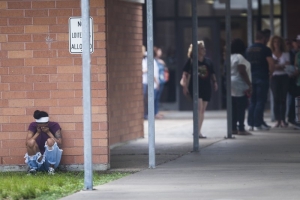 SANTA FE, Texas (AP) — The Latest on a shooting at a high school in Santa Fe, Texas (all times local):

A student at a Houston-area high school where 10 people were killed says it was a “perfectly normal day” before shots rang out in her art classroom.

Breanna Quintanilla, a 17-year-old junior at Santa Fe High School, says that when Dimitrios Pagourtzis walked into the room, he pointed at one person and said, “I’m going to kill you.” She did not identify the student who was shot.

Quintanilla also says the suspect fired in her direction as she tried to run out of the room. She says the bullet ricocheted and hit her right leg. She was still wearing a hospital bracelet on her wrist as she spoke after a Friday night vigil.

Pagourtzis has been charged with capital murder in the school shooting. He was denied bond at a hearing earlier Friday.

A leader at a program for foreign exchange students and the Pakistani Embassy in Washington, D.C., say a Pakistani girl is among those killed in the Texas high school shooting.

Megan Lysaght, manager of the Kennedy-Lugar Youth Exchange & Study Abroad program, sent a letter to other students in the program confirming that Sabika Sheikh was killed in the shooting at Santa Fe High School.

The letter says the program is devastated by Sabika’s loss and would be holding a moment of silence for her.

Lysaght declined further comment when contacted by The Associated Press and referred calls to a State Department spokesman.

The Pakistan Embassy in Washington identified Sabika as a victim of the shooting on Twitter and wrote that “our thoughts and prayers are with Sabika’s family and friends.”

The chairman of the House Homeland Security Committee says he expects the Justice Department to pursue additional charges against the suspected gunman at a Texas high school.

The Santa Fe High School student was in custody on murder charges and made his initial court appearance Friday evening by video link from the Galveston County Jail. He’s accused of killing 10 people, most of them fellow students. Authorities say he also had explosive devices that were found in the school and nearby.

McCaul is a former federal prosecutor. He thinks the Justice Department “wants to ramp this up as much as they can to send a message of deterrence.”

Family members say a substitute teacher whose passion was her children and grandchildren is among the victims of the shooting at a Texas high school.

She says Tisdale, who was in her 60s, was like a mother to her and helped her shop for wedding dresses last year.

Olinde says Tisdale was married to her husband for close to 40 years and had three children and eight grandchildren. She says she “never met a woman who loved her family so much.”

Olinde’s fiance, Eric Sanders, says “words don’t explain her lust for life and the joy she got from helping people.”

Officials have canceled classes at schools in the Santa Fe Independent School District through at least Tuesday in the wake of a shooting at Santa Fe High School that left 10 dead, most of them students.

In a statement posted on the district website, officials indicated that no plan has been made for resuming classes.

Seventeen-year-old Dimitrios Pagourtzis is charged with capital murder in the shooting rampage. A judge denied him bond at a court hearing Friday evening.

A judge has denied bond for the 17-year-old accused of killing 10 people and wounding 10 others at a Texas high school.

Pagourtzis has been charged with capital murder in the Friday morning shooting at Santa Fe High School. He did not enter a plea at the hearing.

Students at a Houston-area high school where a shooting left 10 people dead and 10 wounded are divided on the issue on gun control.

Seventeen-year-old Dimitrios Pagourtzis has been identified as the suspect in Friday’s shooting at Santa Fe High School.

Branden Auzston, also 17, is a junior at the school. He says he doesn’t like the idea of arming teachers or allowing open carry on school campuses.

Auzston says “that might help, but at the same time it would just leave room for more deaths.” He thinks security at his school could be improved if more police officers are stationed there “but in a smart manner.”

She says “it’s not, like, the gun’s fault” whenever a school shooting happens. Sullivan adds, “No, it’s the kid who had the idea. Something is wrong with his head. He had the weird idea to shoot up a school.”

President Donald Trump has “activated” his gun safety commission and is expected to meet with members next week in the wake of the deadly school shooting in Texas.

White House spokeswoman Sarah Huckabee Sanders says the commission the president convened after the Parkland, Florida, shooting in February “has been activated today to start that conversation up again.” She says she believes it will be meeting again in “first part of next week.”

She declined to say whether Trump will revisit some gun control measures after another school shooting, but adds, “Certainly conversation’s ongoing about the best ways to protect kids across the country.”

Netflix has canceled the premiere of its second season of the teen drama “13 Reasons Why” because of a school shooting near Houston.

Despite the cancelled premiere, the entire Season 2 is available on Netflix.

The first season of “13 Reasons Why” drew criticism for its graphic depiction of a teenager’s suicide. The second season focuses on the aftermath of the girl’s death, and includes a storyline about a thwarted school shooting.

U.S. Senator John Cornyn says the 17-year-old student accused in a fatal shooting at a Texas high school used a semi-automatic pistol and a sawed-off shotgun to kill 10 people.

The Republican from Texas says investigators are still determining whether the shotgun’s shortened barrel is legal.

Dimitrios Pagourtzis has been charged with capital murder in the Friday shooting that also wounded 10 people at Santa Fe High School near Houston.

Cornyn says the suspect had a variety of homemade explosives in his car and at the school, including pipe bombs and “pressure-cooker-like bombs” similar to those used in the Boston Marathon attack.

Cornyn says the suspect “planned on doing this for some time, he advertised his intentions but somehow slipped through the cracks.”

Vice President Mike Pence says President Donald Trump “has been taking action to make our schools and our communities safe,” hours after a mass shooting at a high school in Texas.

Pence on Friday called it a “heartbreaking day” after at least 10 people were killed at a high school in Santa Fe, Texas.

Speaking at political event in his home state of Indiana, Pence is highlighting the administration’s efforts on school safety, including signing legislation authorizing $2 billion for state and local governments to use to protect schools and a bill to strengthen the nation’s firearm background check system.

Pence says the administration is still calling on states “to follow the example of Indiana and allow qualified school personnel to carry concealed weapons.” A school police officer was among the 10 people who were shot and injured Friday in Santa Fe.

Texas’ governor says the 17-year-old student believed to be behind a high school shooting that killed 10 people wrote in his journal of wanting to carry out such an attack.

Republican Greg Abbott said Friday that the suspect “has information contained in journals on his computer, in his cellphone that … said … not only did he want to commit the shooting but he wanted to commit suicide after the shooting.”

Abbott added that the suspect gave himself up to authorities, saying he “didn’t have the courage” to take his own life.

Dimitrios Pagourtzis (Puh-GORE-cheese) has been charged with capital murder in the Friday morning shooting that killed 10 people and wounded 10 others in Santa Fe, near Houston and Galveston.

A hospital spokesman says a school resource officer who was shot in the arm when he engaged a gunman during a shooting at a Houston-area school is undergoing surgery.

Marshall says a bullet hit Barnes’ arm, damaging the bone and a major blood vessel around his elbow. He says the blood vessel has been repaired, and that Barnes is expected to emerge from surgery within a few hours.

President Donald Trump has ordered that U.S. flags fly at half-staff as a mark of “solemn respect” for those affected by the school shooting in Texas.

Flags are to be flown at half-staff until sunset on May 22. The order applies to the White House and all public buildings and grounds, military posts and naval stations and vessels, as well as at U.S. embassies, consular offices and other facilities abroad. The flag atop the White House was immediately lowered on Friday.

Texas authorities say 10 people, mostly students, were killed Friday when a 17-year-old student carrying a shotgun and a revolver opened fire at a Houston-area high school.

Ten other people were wounded at the school in Santa Fe.