Shatha Khalil *
Not only Iran cut off more than fifteen mouths of fresh water, which was poured into the Tigris river , but increased this by the release of sewage water and the poison of its factories to pour into the Iraqi rivers, and to kill the remnant of the land that it was called the land of Sawad due to the abundance of its orchards, and the water of Shatt al-Arab is the basis of agricultural life in the province of Basra, which Iran is trying hard to destroy Iraq in all respects.
The Iranian authorities in the province of Khuzestan has pumped the sewage water left by sugar cane plantations, and in large quantities, towards the Iraqi border territory, which led to the accumulation of it on the border strip, flooded large areas of border land, which exceeded 15 Km2, extended from Al-Shalamjah port in Basra Governorate, ending to the Al- Huwazah marsh in Maysan province, which caused serious and great damage to Iraq’s water resources and agricultural land.

The satellite images show that Iranian waters flowing into Iraqi territory are sewage water from fish farms and Iranian sugar farms. When they have sugar cane harvest, they empty farms from water which is filled with systemic pesticides and fungicides, they are highly toxic chemical residues in the long run, the accumulation in the body causes cancer, in addition to the waste water of the factories, which are accidental products resulting from the manufacturing operations of petrochemical factories, Abadan refinery and Iranian plastic factories.

Basra is heavily dependent on the waters of the Shatt al-Arab, and has been suffering for years from the high salinity, especially after Iran’s closure of the Karun and Karkh rivers, and the transformation them into their territory in full, in addition to the reduction of water flows coming from the Tigris and Euphrates rivers while the Salinity ratio in the area of Saybah reached (4000) ppm.

Not only that, as Iran resorts daily to discharge large amounts of salt water to the Shatt al-Arab, to empty flooded farmland throughout the summer from dirty water, which increases the possibility of collapse of the earth dam (embankment) , which will push the remnants of the Iran-Iraq war of mines and explosives to the beaches of Iraq, contrary to the international agreements signed, and due to the scarcity of potable water and daily use in the province, the majority of the population resort to buy potable water at a cost of more than 50 thousand Iraqi dinars per month for each family.

The following are two satellite images showing and illustrating:
The first picture : 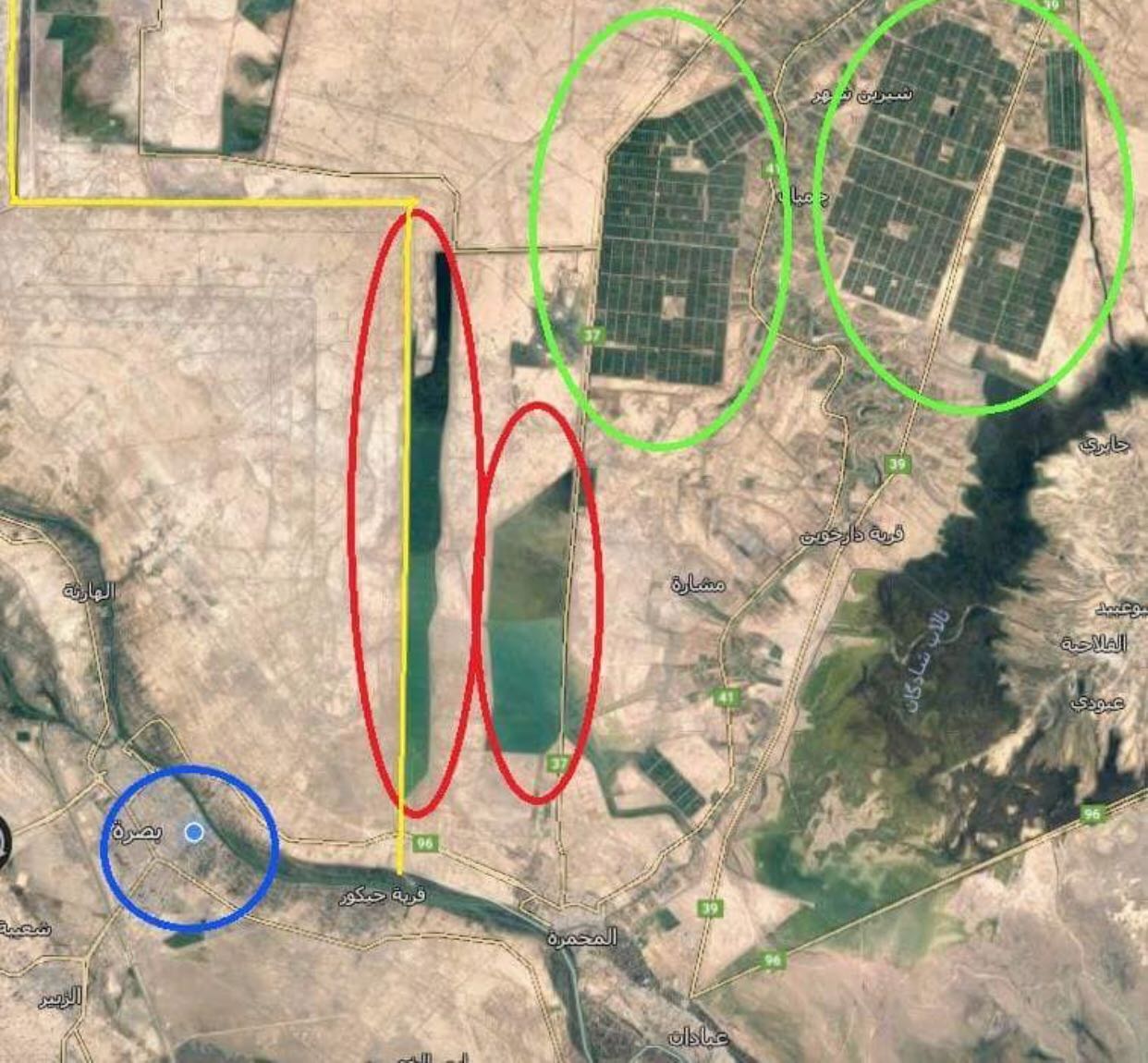 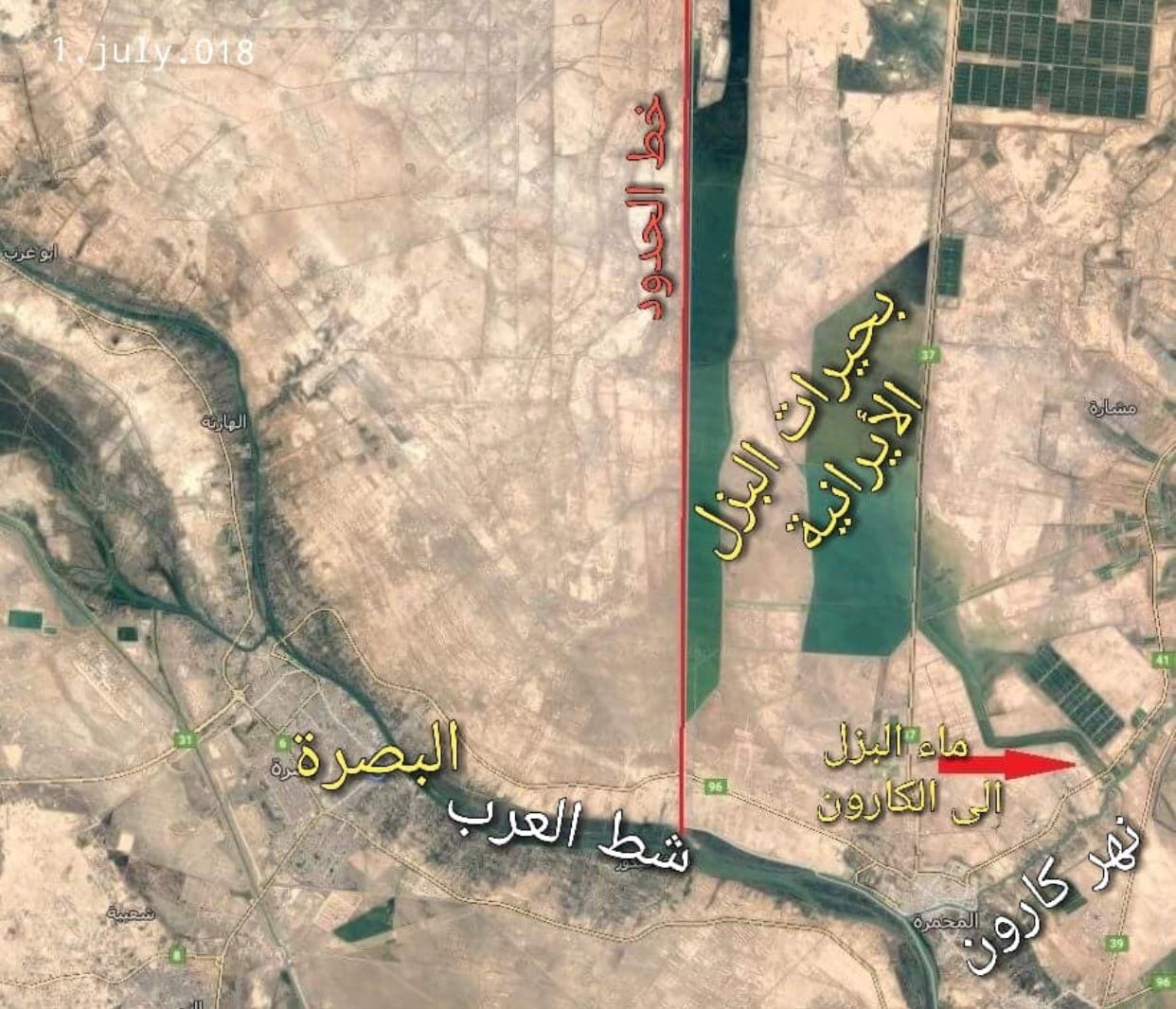 The first picture shows the presence of Iranian salt lakes adjacent to the Iraqi border, which is a crime according to international charters and conventions, because of the arrival of water through the Karun to pour into the Shatt al-Arab, and the location of these lakes in the land above the Shatt al-Arab, and the proximity of the distance from Shalamjah, it is only separated from Iraqi territory by earth dam threatened with collapse , which means the flow of all these waters to reach the Shatt al-Arab and destroy all lands going through and the possibility of the leakage of part of this highly saline water in the form of groundwater to reach distances in the depth of Iraqi territory and several kilometers, because of the low ground of Basra to mingle with fresh groundwater.

The second picture:
The second picture shows the red circles, which refer to the Iranian drainage, which is larger than the size of the city of Basrah, and the quantities of water is very saline more than a thousand times the amount of water Shatt al-Arab.
The green circles shown in the picture refer to the Iranian reclaimed land (polder), whose size exceeds that of Basra.

The suffering and complaints of the people in Saybah – Faw district, which lies some 90 kilometers south of Basra, continue from the increase of the salinity of the water in the Shatt al-Arab, which led to the recording of large losses in their crops and the death of their animals. The suffering of Basra was no limited only with the Iranian drainage but the conflict between the southern provinces on the sharing of water quotas casts a shadow over the province and increase the suffering of its people.

Warnings from the Iraqi side to the Iranian side:
The Iraqi armed forces of the border guards to maintain the earthy dams located within the Iraqi-Iranian border, but specialists in the province of Basra, warned of the collapse of the terrain dam fully , as a result of the rise of Iranian sewage water, and the low land of Iraq , and the lack of plant bumpers to impede wind blowing that drives the water strongly, while the technical deputy minister of Agriculture Mehdi Dhamad al-Qaisi said , the flow of the waters of the Iranian Sewage have been repeated earlier, although it is internationally unacceptable and categorically.

As no country can enter the waters of the sewage belonging to it to neighboring countries, as they are harmful to the land entering to it , and he added that water affects the fertility of agricultural land and its nature.
The Ministry of Water Resources has contacts with Iran on the issue, and the Ministry calls on all parties to intervene and solve the serious problem affecting the life of Iraqi citizens.
The sewage water flowing from Iranian territory to Iraqi territory has damaged agricultural land and livestock and led to the death of large quantities of fish, due to severe salinity. To stop this dangerous problem, the Iraqi government must deal with the Iranian side seriously to stop these violations. , The fact that the process of stopping the leakage of sewage water is not an easy task, but requires the Iranian side to stop the implementation of agricultural projects close to the Iraqi border from the counterpart to Shatt al-Arab, but at the same time , it does not respond to any official demands from the Iraqi government in this regard.

The earth dam… The coming danger:
There were gaps in the embankment through which water leaked in more than 50 km. In the event of its collapse, this would cause the draining of Iranian sewage to the eastern areas of the governorate, the destruction of agricultural land, the pollution of Shatt al-Arab waters, and the sinking of land occupied by oil companies.
In this regard, the head of agricultural engineers in the province, “Alaa Badran said ,” The measures taken to address this problem is temporary because of the lack of potential, which affected the continuation of the restoration work, adding that there is a shortage of fuel supply for the mechanisms working to complete the terrain dam through which we managed to avoid the stage of danger three years ago but the problem remains and the Iranian side did not take any measures to reduce the aggravation of this problem. Al-Badran explained , what makes the problem more complicated is that the local government does not have the necessary powers to address neighboring countries about the problems of borders especially since external contacts are not carried out only through the Iraqi Ministry of Foreign Affairs exclusively, which has been informed about the problem for nearly six years, and this file is still in the corridors without being moved until the moment, and we did not see the cooperation of the federal government in providing assistance to address this serious problem .

Al-Badran added that avoiding the danger of the Iranian sewage water on the governorate’s lands lies in the creation of an earth dam with the correct engineering and technical specifications. If the coincidence did not happen in the fact that the transport and oil ministers are being from the same province of the current session and expressed personal interest in the issue and informed the cadres of the two ministries to move quickly, the water had been swept the east of the province in full .
While the representative of the Department of Water Resources in the province, Faisal Abdul Qadir said, that the joint authorities of water resources and the province and ports and the Iraqi Oil Company in addition to the effort of the security forces completed the repair of a distance of one hundred and fifty meters out of more than 11 kilometers of the damaged parts of the dam.
While the member of the Council Jawad Emirate said that an earlier agreement was made with the Iranian side for the establishment of a channel to drain sewage water towards the sea, but what has been agreed has not been implemented so far.

Meanwhile, the Iranian consulate in the province denied that Iran was leaking the waters of sewage through the Karun River to the Shatt al-Arab waters, pointing out that the straightening of the Karun River leads to the flow of sewage water to the sea and not to Iraqi waters.