Latest News
2018-08-19
Editor
Home
Releases
Awaiting: the address of the next Iraqi government 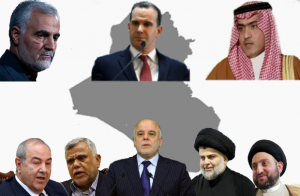 After the announcement of the results of the Iraqi parliamentary elections that took place in the last May, and knowing the most important electoral blocs that won. Baghdad – the Iraqi capital,  witnessed and is still witnessing political activity internally, regionally, internationally centered on the formation of the next Iraqi government. In view of the importance of its formation, the highest religious authority (Marja) in Najaf – for the first time – entered the line of its formation and expressed its opinion in its desire to have a new name that has never served as Prime Minister of Iraq after 2003.
As long as the formation of the Iraqi government is no longer internal in post-2003 Iraq, Tehran is present in its formation through its Baghdad-based influence, and Ankara is also preoccupied with the matter of its formation by sending its followers to Baghdad one by one. Riyadh is also moving through Thamer al-Sabhan, its secretary of state, who tried to bring the Sunnis of Iraq into an entity and draw their path, but they followed another path, a sign of failure on his diplomatic efforts in Iraq.
The official sponsor of the political system in Iraq, the United States of America is present on the formation of the Iraqi government, and also London and Paris, each according to its weight. Washington and London are not hiding their diplomatic support for Haidar al-Abadi to be Iraq’s next prime minister. The United Nations envoy in Iraq is also in consultations with the ambassadors of permanent members of the Security Council, as well as with the ambassadors of Iraq’s neighbors and Iraqi politicians. The United Nation’s vision with Washington and London is identical in the choice of Iraq’s next prime minister. The following is a presentation of the positions of the internal and external forces of the formation of the Iraqi government as follows:

I. Higher Religious Marja :
Al-Marja informed all its visitors from Iraqis and others that PM should be an independent figure and had never served as Prime Minister of Iraq. This view is respected by the East and West, and the Iraqi people have great respect and appreciation for the Marja . We believe that the opinion of the Marja in the formation of the Iraqi government is the prevailing trend.
II. Iran:
Iran was aspiring that the five Shiite forces in Iraq to form a coalition among them, and in the light of which the formation of the next Iraqi government to be done, but failure was the share of this endeavor. But this failure did not prevent Iran through General Qassem Soleimani from forming a Shiite alliance that includes at least three political forces , who would agree with each other on the next prime minister of Iraq on condition that this understanding will be presented on the Sunnis and Kurds . Iran’s failure to bring together the five Shiite forces has forced them to move within an Iraqi national framework.
There is no doubt that Iran has a power in the national axis, after the failure of Thamer al-Sabhan’s efforts to form a political force in Iraq, no political figure in Iraq joined this axis only with the consent of Iran, and this is an evidence of the impact of the Iranian dimension in the overall Iraqi politics.

III: Saudi Arabia:
Despite the presence of Saudi Ambassador to Iraq Abdul Aziz Al-Shammari, who is respected and appreciated by all the political forces in Iraq, the Iraqi file is managed by Thamer Al-Subhan, the minister in the Saudi Foreign Ministry. Given the importance of Iraq in Saudi Arabia’s foreign policy and the Arab depth represented by this country, Saudi Arabia has tried during the last year and the present to establish a Sunni entity and for this purpose has held meetings in Turkey and other countries, but this entity did not succeed prompting each political figure to join another political list, thereby, the Sunni entity was fragmented.
After this failure, the efforts of Thamer al-Sbahan, the minister in the Saudi foreign ministry, were limited to supporting one of the figures in the last parliamentary elections, which was only an insignificant number in those elections. How to provide support to a person who is not important to attend and if absent, no question about it ?! Despite the fact that the Saudi leadership that is represented by the Custodian of the Two Holy Mosques King Salman Bin Abdul Aziz and his Crown Prince Mohammed bin Salman bin Abdulaziz, has sought to rebuild bridges of confidence and strengthen economic cooperation with Iraq under the government of Haider Abadi.

4th. TURKEY:
The current Turkish policy on Iraq is based on three very important dimensions. First, the security dimension: The presence of the PKK on Iraqi territory is a controversial issue in the Turkish-Iraqi relations, and this is even more so when we know that the former Iraqi government and the current government at the beginning of its era have allocated salaries for some elements of the PKK from the Iraqi treasury!, and provided them with a safe haven, and these are a source of anger for the Turkish government, and it has right to do so. The second , the economic dimension: the economic gate was and it has always been the preferred gate for the government of justice and development in Turkey to strengthen political relations and re-position the Turkish policy towards the Arab countries , currently there is a trade exchange between Turkey and Iraq amounting to 10 billion US dollars and both countries aspire to increase this trade exchange especially after the record decline of the Turkish currency against the dollar against the backdrop of the escalating crisis between Washington and Ankara. During this ongoing crisis, Iraqi Prime Minister Haidar al-Abadi paid a courageous visit to Turkey and met with its leader Recep Tayyip Erdogan as a manifestation of Turkey’s support in its current crisis. The third dimension is the political dimension : the Turkish government has informed the political forces in Iraq of its desire that Osama al-Nujaifi to become the next speaker of the Iraqi parliament because of the moral and political qualities that qualify him to occupy that position. From this , it seems that Iraq is governed by axis policies Turkey and Qatar on the one hand and Saudi Arabia and the United Arab Emirates and other countries with another axis, and Iran as well.
Washington, London and the United Nations:
These three actors do not hide their ambitions that Haider al-Abadi to become Prime Minister of Iraq in the next phase. They have informed all the political forces in Iraq about this matter, as they have informed the neighboring countries of Iraq. In view of the importance of this matter, led by the US Secretary of State and the US national security adviser, Britt McGurk and the US ambassador to Iraq, who held important meetings in Baghdad with the political forces in Iraq, who informed them to join the Iraqi national project represented by Haider Abadi , and to ensure the success of this project, American Foreign Minister contacted Nechirvan Barzani, head of the Kurdistan Regional Government of Iraq, an indicator of the strength of the Kurds in the Iraqi political scene as a whole. As the US Secretary of State informed the President of the Kurdistan Regional Government of Iraq to join the Iraqi national project, and that the Kurdistan region of Iraq would be an ally of Washington if the region joined it .
Washington has informed Iraqi and Kurdish political forces via its officials that Washington is an ally of Iraq to join the Iraqi national project, if this project failed and another project hostile to the United States was made in Iraq and these forces and the Kurds went on its track, Washington would abandon Iraq in security , militarily, economically and politically and it can impose sanctions on Iraq as it has imposed on international allies and partners before, and Turkey is a simple example.
Conclusion:
We are not beyond from the truth when we say that the Iraqi national project is a project to save Iraq from its crises and it is a project that satisfies all parties, and maximize the gains and reduces the losses. With this project, it is possible for Iraq and the Iraqi people to regain their health and can enjoy security, stability and economic prosperity. If this is achieved, Iraq with its geographical location and political status that makes it a natural corridor to meet the East in the West, this project will purge the land of Iraq from the dirt of the terrorists , it does not threaten the neighboring countries or to be threatened by them . A project that guarantees the sovereignty of Iraq and non-interference in its internal affairs and vice versa.
If the international and regional intentions are sincere in the success of the moderate Iraqi national project, it has a political responsibility to do so. For its part, Washington avoids solving its problems with Tehran within the Iraqi Council of Representatives. In other words, the great superpowers and regional countries must be refrained from settling their disputes with one another on Iraqi soil. Iraq is not an active theater for this.
In Iraq, in order for the Iraqi national project to succeed Iraqi Prime Minister Haider al-Abbadi has to make changes in his office, his ministers and the central bank, he must end the deep state inside Iraq. If this project does not see the light, Haydar al-Abadi has to be an independent politician who is not affiliated with any political party or calculated on a specific regional state. Yet Haydar al-Abadi’s chance to hold the post of prime minister remains one of the strongest chances.