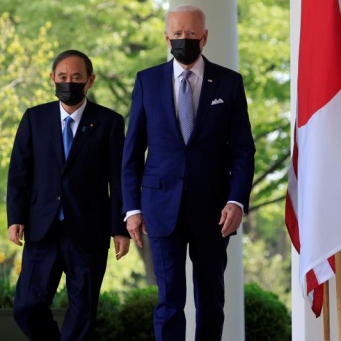 japan has been delighted with the first months of Joe Biden’s presidency. Unlike his predecessor, whose transactional view of diplomacy rankled many in Tokyo, Biden has been at pains to rekindle the U.S.-Japanese alliance and to emphasize that Japan remains the linchpin of U.S. security policy in Asia. In February, the two nations renewed the agreement under which Japan hosts U.S. troops, and in March, Secretary of State Antony Blinken and Secretary of Defense Lloyd Austin both visited Japan on their first overseas trips. Biden hosted Japanese Prime Minister Suga Yoshihide as his first foreign guest as president.

It will surprise no one that a major focus of these early meetings has been China, whose economic and military rise has unnerved Washington and Tokyo and united them in competition with Beijing. Biden administration officials have repeatedly affirmed their readiness to defend Japan, including its claim to the disputed Senkaku Islands (known in China as the Diaoyu Islands). But in addition to military and diplomatic competition with China, which has long been central to the U.S.-Japanese relationship, both countries have placed a new and important emphasis on economic security. In their first meeting, Biden