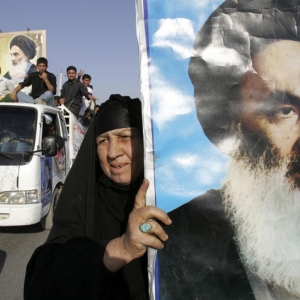 On August 13, Iraqi militia leader Hamid al-Yasiri delivered an unprecedented public denunciation of Iran-backed armed groups operating in his country, accusing them of killing peaceful protestors and stealing public funds in the name of Shia Islam. The sermon was particularly powerful given Yasiri’s status as an influential cleric close to Ayatollah Ali al-Sistani, Iraq’s top Shia figure. Such remarks provide another unmistakable sign of the widening gap between pro-Iran militias and pro-Sistani brigades in the Popular Mobilization Forces (PMF)—a rift that could damage the political sway and local legitimacy of Tehran’s proxies. Understanding this vulnerability is key to devising any strategy aimed at countering Iraq’s most problematic militias.

Why Yasiri’s Sermon Hints at a Wider Shift
The August sermon reflects the broader ideological war currently being waged within Shia communities in Iraq and elsewhere. On one side is the militant/political Shia school led by the Islamic Republic of Iran, whose adherents are more loyal to transnational ideological principles than the sovereign nations in which they reside. On the other side is the nonpolitical Shia school led by Sistani, who holds sway in the Iraqi holy city of Najaf as al-Marja al-Ala (highest source of emulation)Speaking in the southern town of Rumaythah before hundreds of Shia mourners marking the holy month of Muharram, Yasiri dedicated most of his August sermon to a stinging rebuke of Iran-backed militias. One of his central messages was the importance of loyalty to Iraq: “We learned from Imam Hussein that to be a member of a country but loyal to another country is a big treason, it’s a massive fraud and a huge deception.” This topic is a sensitive one for Iraqi members of Tehran’s proxy groups, since many of their fellow citizens regard them as traitors. Yasiri continued: “To receive instructions and guidance from beyond the borders isn’t Imam Hussein’s ideology…We refuse these affiliations and these loyalties and announce with our loudest voice without fear or hesitation…that whoever is loyal to another country is a traitor.”

Indeed, his speech was notable for its angry tone as much as its content. He described Iran-backed militias in a manner suggesting excommunication or heretical separation from mainstream Shia Islam: “Our religion is not like their religion, and our Islam is not like theirs, and the Hussein [whose tomb] we walk to…is different from the Hussein they believe in. The Hussein we belong to is the son of Ali [the first Shia imam] and Fatimah [the Prophet Muhammad’s daughter], while the Hussein they belong to is the son of Shimr and the liver eater.” In Shia historiography, Shimr was the commander who beheaded Imam Hussein in 680 AD, and the “liver eater” is Hind, grandmother of the ruler who supposedly ordered Hussein’s death (so-named because she purportedly removed and bit the liver of the Prophet’s slain uncle after the Battle of Uhud in 625 AD). In other words, Yasiri associated Iran-backed militias with ancient enemies of Shia Islam—a message that could prove extremely damaging to their religious legitimacy when delivered by someone close to Sistani.

Another way in which Sistani has reaffirmed the importance of respecting national sovereignty is by exhorting Shia to integrate into the country they call home, whether Iraq or another nation. As Hamid al-Khafaf, his representative in Lebanon, noted in a September 2015 video, “[Sistani] believes in the necessity of integrating the Shia in whatever country they live, and [he] leaves the qualified people to manage their affairs,” implicitly referring to state officials. Religious institutions supervised by Sistani have promulgated similar messages. In March 2019, for example, the Imam Hussein Shrine Foundation organized a conference titled, “The Foundations of the Civil State from an Islamic Perspective,” whose agenda focused on discussing secular political systems through a religious lens.

Such views are diametrically opposed to the revolutionary pan-Shia worldview espoused by the Iranian regime, whose central ideology of velayat-e faqih (guardianship of the jurisprudent) places the rulings of Supreme Leader Ali Khamenei above those of any elected civil officials in Iran or abroad. This is why controlling Najaf and its seminaries—or, at least, marginalizing them—is a prerequisite to any Iranian takeover of Iraq. As long as Sistani is alive and well, this scenario is extremely unlikely. Yet he is ninety-one years old, and based on Najaf’s traditions, determining his successor once he passes may take months or even years. Iran and its proxies may therefore choose that moment to either install a favorite marja or sow enough chaos and uncertainty in Najaf to tarnish the city’s influence.

In the most practical terms, this dispute has come to a head over the management of Iraq’s militias. Since its inception in 2014, the PMF has been dominated by pro-Iran groups that treat the pro-Sistani shrine units unfavorably. By flouting the PMF Commission’s directives and aligning with factions that have not succumbed to Tehran—namely, Sistani, the Najaf school, and the national army—the shrine units are helping to stave off any proxy plans for incrementally taking over Iraq the way Hezbollah has taken over Lebanon. Going forward, these units and other proponents of Iraqi national sovereignty (e.g., Yasiri) can play a crucial role in ensuring a peaceful transition process and maintaining order in Najaf once the time comes for a new marja.

Policy Recommendations
Washington and other international players should keep their distance when intra-Shia religious debates are underway. However subtle outsiders think they are being, foreign intervention can disrupt promising local developments. Yet partners can still take indirect measures to reinforce the efforts of Sistani’s followers:

Support shrine units indirectly via the Defense Ministry. As mentioned above, the shrine units are now operationally linked to the Iraqi army rather than the Iran-dominated PMF Commission (e.g., they follow army orders and occasionally participate in joint operations). Accordingly, the international community should encourage the Iraqi government and security forces to bolster their relationship with shrine units and help them increase their operational capacity.

Restore the web domain of Karbala TV. In June, the U.S. Justice Department seized thirty-three domains run by media channels affiliated with Iran’s Islamic Radio and Television Union. One of the outlets targeted was Karbala TV, a channel owned by the Imam Hussein Shrine Foundation and affiliated with Sistani. This was an unnecessary move against an outlet that has not expressed any hostility toward the United States.