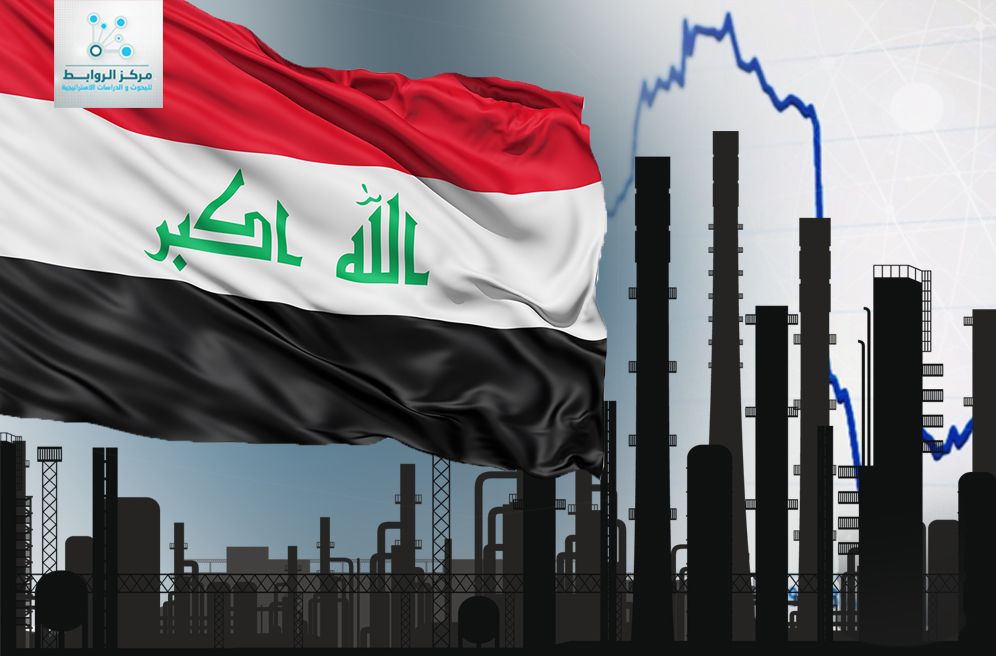 There is no doubt that the current phase is the most difficult in the history of Iraq economically, politically and socially, and it is truly a terrifying stage if we look at the facts and figures Which refers to the current situation in all fields.
Iraq has suffered from entering of the US occupation forces to its territory in 2003, of neglect and waste as a result of the absence of rational policy and administration, which led to the loss of a large part of the important wealth of the country’s resource of the Iraqi treasury.

Iraq today is facing the roughest conditions and more severe noting that the Policy is incapable of being rational , and the economy collapsed, and social situation is very critical; there are displaced people and their tragedies and the oppressed and the pain and the dead and the cries of the bereaved, all are met in a country ravaged by sectarian wars and foreign interventions and hands of terrorism.
To talk about the Iraqi economy takes long time, and that is one of the biggest challenges plaguing the country, and of course the reason is the factors related to the structure of the Iraqi economy, for example, but not exclusively ; the revenue and dependence on oil in the budget, and the weakness of the banking business, and the absence of transparency, the government intervention in the private sector, and many other obstacles formed a real obstacle to any progress or development of the Iraqi economy.
Economic and financial crises in Iraq is the fiercest in its history, figures and economic data are terrifying, and raises urgent questions about the ability of this oil country to withstand, Iraq which is in second place at the level of global reserves of oil and oil is the only revenue of it from the hard currency , which is based on oil incomes by more than 95% of its revenue, and even this only source (oil) is today receives the violent shocks tumbled to prices to levels that sparked panic and fear in various parts of the world, however, Iraq is still moving in the same economic policy, despite of the repeated warnings of experts and economists of dependence on oil as the sole source of the country, but the lack of future vision and concern to the political and security affairs obstructed them from paying attention to these warnings, the result is that Iraq is facing today a severe financial crisis prompted him to request external assistance noting that Iraq is oil country par excellence.
Reports indicate that the Iraqi Ministry of Finance announced that the volume of World Bank loans in 2015 submitted to Iraq amounted to about 1.900 million dollars, and that these loans were distributed among construction and gas projects, infrastructure and reconstruction of the liberated areas from the organization Daash .
If we move to talk about the general budget , we will be surprised that the total internal and external debt reached 4.82 billion dollars include $ 26 billion of internal debt , while total oil revenues after the settlement of companies premium $ 38 billion, that is to say , a deficit of more than five billion dollars.

And here we go back to the nature of the licensing rounds, which states that companies take dues either in cash or replaced by oil , and thus benefits of these companies are accumulated, which is referred to by Prime Minister Haider al-Abadi and Oil Minister Adel Abdul Mahdi saying that the current government inherited from its predecessor a debt exceeding $ 23 billion, due to investments accumulation , and the government began to pay dues estimated by 4 billion dollars for each part where they are bringing forward part of these dues to the following year, which accumulate the debt on the Iraqi state.

Reports indicate that the total of what was sold in the currency auction during 2015 of $ 44 billion, The number of loss-making companies is 113 company for 44 profitable, “the report adds that the Iraqi government paid about 2.700 trillion dinars to the staff of these companies, “while the government resorted to borrowing from banks to cover loans of public companies worth 8.8 trillion dinars.

Sources indicate that the quantity sold to banks from the date of 3th of the month of January, to the tenth of it is by $ 785.222 .144, while the quantity sold from the date of the fourth of January to the tenth of 2015 is by 620.371 million dollars.
“Talking about security conditions experienced by the country from the war on terror is worrying too, and the occupation of some of the provinces by the group of state regulation “Daash”, and theft of government and private banks and institutions and taking possession of provinces deprived the Treasury also from an important source and led to the loss of those banks and their clients.
Iraq today also lost foreign investment because of the security situations , and the absence of economic planning and the absence of investment vision, which led to a decline in revenue resulting from capital and foreign investment, and Iraq has become today repulsive environment for investment and a hotbed of interventions of neighboring countries such as Iran.
And this was reflected on the work of banks and reflected on the limits of liquidity , which led it in some banks to a minimum, which will expose some of them to bankruptcy and financial collapse in addition to that , it will lead to affect on the economic situation and the activity of financing and investment during the current phase.

As for the file of corruption, Iraq is today replete with issues of corruption and in spite of the government’s continuing promises, but the phenomenon of corruption in Iraq is pervasive in all aspects of the state, and is weekly witnessing mass demonstrations to protest against the rampant corruption in government institutions, and to demand accountability of embezzlers and the corrupt and the implementation of government reforms.

Reports indicate that Iraq will witness a rise in poverty and unemployment rates during 2016, and the ratio may exceeds 30 percent, because of financial austerity policy adopted by the government, which brought to a halt for the implementation of hundreds of projects in various provinces, because of low oil prices in the global markets.
The government has resorted to raising the taxes of sales on imported goods , in order to strengthen financial revenue, and to reduce effects of the financial crisis, which the country is exposed to it , as a result of low oil prices in the world market.

Situations in the region
In the Kurdistan region of Iraq, the situation is no less dangerous than in Baghdad, The region suffers from salaries crisis of its employees including salaries of members of the armed forces and the Peshmerga forces fighting organization “Islamic State , there are outstanding issues between Baghdad and Erbil on oil and the budget files and the fight against al” Daash “and sheltering more than a million and a half displaced people and refugees.

Financial situation of the region is unstable, and because of the financial crisis afflicting the region, sources that suggest the province may be unable to pay salaries in the coming days, as sources indicate that employees’ salaries will be distributed according to oil revenues, which is what might up the matter to pay the salaries once a year, and here sources indicate that the staff are without salaries since five months , and the central bank is empty, accompanied by a huge debt of up to $ 21 billion.
If we think in oil revenues for the region we will discover that it is unable to meet the government’s requirements, even though the price of a barrel of oil in the world market sold with $ 28, But the barrel of the Kurdistan Region oil is sold in less than the price at 10 dollars. , and the oil revenues after the payments of the insurance of the oil companies and the oil pipeline with Turkey , nothing will be left for them.
But the question Is the government will be able to pay salaries to its employees? Will there be a significant delay in the future as it is now in the payment of salaries? These questions come from the perception of oil prices, which is falling apart daily, which increases the difficulties of the financial situation and puts the major challenges in front of the government of the region in the coming days.
Collapse of oil prices and the decline of revenues, and the spread of financial and administrative corruption, widespread poverty, and the issue of refugees and displaced persons, many issues, all will be the challenge and a huge pressure on the governments of the center and the region, and will impose on them the harsh reality in the face of the economic crisis experienced by the country, and here we refer to the possibility of emergence of popular protests permeate the country, and the beginning may be in Sulaymaniyah and Basra, and may spread to other provinces because of the status quo.
Here we have to wonder, if the government of the regime was able to provide for its citizens a dose on the future of the situations in the light of the current financial crisis, then , what will be the dose that the Baghdad government will convince its citizens in the future days.