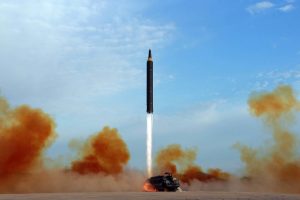 SEOUL, South Korea (AP) — Will North Korea’s next nuclear test involve a thermonuclear missile screaming over Japan? That’s a question being asked after North Korea’s foreign minister said his country may test a hydrogen bomb in the Pacific Ocean.

The world hasn’t seen an above-ground, atmospheric nuclear test since an inland detonation by China in 1980 and North Korea upending that could push the region dangerously close to war. The room for error would be minimal and any mistake could be disastrous. Even if successful, such a test could endanger air and sea traffic in the region.

Because of that many experts don’t think North Korea would take such a risk. But they’re also not ruling it out given the North’s increasing number of nuclear and missile tests.

The main reason for North Korea to take that risk would be to quiet outside doubts about whether it really has a thermonuclear weapon small enough to fit on a missile, said Jeffrey Lewis, a U.S. arms control expert at the Middlebury Center of International Studies at Monterey. So far North Korea has been separately testing nuclear weapons and the ballistic missiles built to deliver them, rather than testing them together.

North Korean Foreign Minister Ri Yong Ho wouldn’t have spoken without approval from Pyongyang’s top leadership when he suggested to reporters in New York on Friday that the country could conduct an atmospheric hydrogen bomb test to fulfill the vows of the country’s leader Kim Jong Un.

Kim, in an unusual direct statement to the world, pledged hours earlier to take “highest-level” action against the United States over Donald Trump’s threat to “totally destroy” the North if provoked. Ri didn’t elaborate and said no one knew what decision Kim would make.

If North Korea attempts an atmospheric nuclear test at sea, it would likely involve its most powerful ballistic missiles, such as the intermediate-range Hwasong-12 or the intercontinental-range Hwasong-14, experts say. The country lacks assets to air-drop a nuclear device and sending a vessel out to sea to detonate a device raises the chances of getting detected and stopped by the U.S. military.

For the nuclear missile to reach a remote part of the Pacific, it would have to fly over Japan, as the North did with two Hwasong-12 test launches in recent weeks.

There have only been a handful of times when atmospheric nuclear tests involved ballistic missiles, including China’s fourth nuclear test in 1966. That involved a midrange Dongfeng-2 missile being launched from a deep inland rocket facility to the Lop Nur nuclear test site in the country’s far west.

Lewis finds similarities between the current situation surrounding North Korea and the events that led to China’s 1966 test, which was driven by U.S. doubts of Chinese capabilities to place nuclear weapons on ballistic missiles.

“The United States is still taking an attitude of skepticism toward North Korea’s nuclear capabilities,” he said. “The difference, of course, is that China fired its nuclear-armed missile over its own territory, not another country.”

A nuclear launch by North Korea would come dangerously close to an act of war, said Lee Choon Geun, a missile expert from South Korea’s Science and Technology Policy Institute. Missile tests can easily go wrong and the consequences of failure could be terrifying if the missile is armed with a nuclear weapon.

A failed flight or an accidental detonation over Japan would likely trigger retaliation from Washington and Tokyo that might result in a nuclear war, he said.

“It’s reasonable to think that Ri was bluffing,” Lee said. “Would they be sure that the United States and Japan will just sit there and watch?”

But Lewis says that’s exactly what the United States and Japan will do.

“Although I am sure such a launch would be very alarming to people in Japan, there is little the United States or Japan could do,” he said. “Would we really start a war over such an act? I don’t think so.”

An atmospheric nuclear test would be far more dangerous than detonations in controlled underground environments, both because of the force of the blast and unrestrained release of radioactive materials that could spread out over large areas. Such a launch would potentially endanger aircraft and ships because it’s highly unlikely the North would give prior warnings or send naval vessels to the area to control sea traffic.

An atmospheric thermonuclear blast would also raise the risks of damage caused by an electromagnetic pulse, an intense wave of electrical energy generated by the explosion that could destroy electronic devices and equipment over a vast area, Lee said.

The United States and the old Soviet Union combined to conduct more than 400 atmospheric nuclear tests before they joined Britain in a 1963 treaty banning tests in the atmosphere, outer space and underwater. The treaty was later signed by more than 100 other countries. China conducted 22 atmospheric nuclear tests, which frequently involved bombers dropping nuclear devices on test sites, before its last one on 1980.

While the impact of previous tests hasn’t been fully understood, damage from radioactive fallout could be serious.

When the United States detonated its most powerful nuclear device in a 1954 test code-named Castle Bravo, the radioactive fallout spread far beyond the test site in the Marshall Islands.

Twenty-three crewmembers of a Japanese fishing vessel that was 160 kilometers (100 miles) east of the detonation site, were contaminated and suffered from radiation sickness. One of the fishermen, Matashichi Oishi, once told The Associated Press that he saw a flash before tiny white flakes fell on the crewmembers like snow.

North Korea in past months has been stepping up the aggressiveness of its nuclear and missile tests.

The North conducted its sixth and most powerful nuclear test on Sept. 3 in what it claimed as a detonation of a thermonuclear weapon built for its developmental Hwasong-14 ICBMs. In two July flight tests, those missiles displayed the potential ability to reach deep into continental United States.

With its two Hwasong-12 launches over Japan in August and September, the North also broke from its previous test regime of firing missiles at highly lofted angles to reduce range and avoid other countries. The launches were seen as North Korea’s attempts to win more military space in a region dominated by its enemies and evaluate the performance and reliability of its missiles under operational conditions.

The North has also threatened to launch a salvo of Hwasong-12s toward Guam, the U.S. Pacific military hub.

Kim Dong-yub, a former South Korean military official who is now an analyst at Seoul’s Institute for Far Eastern Studies, said it’s more likely that the North’s next significant launch would be a full-range test of an unarmed Hwasong-14 ICBM. The North could launch the missile at around 7,000 kilometers (4,349 miles) to display a capability to reach Hawaii or Alaska, he said.

Still, the past months have taught him not to underestimate what the North could do.

“North Korea has repeatedly exceeded my expectations and Kim Jong Un in the statement has vowed to go beyond any expectation,” said Kim, the analyst.