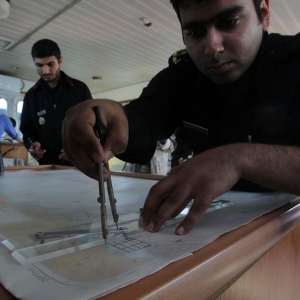 On August 4, personnel from Iran’s Islamic Revolutionary Guard Corps (IRGC) boarded the Emirati bitumen tanker Asphalt Princess in international waters near Fujairah and tried to divert it into Iranian waters. The crew managed to foil their plan by disabling the ship, and the boarding party left when a U.S. Navy destroyer approached. The incident came just five days after a suspected Iranian suicide drone crashed into the Israeli-operated oil tanker Mercer Street near the Omani port of Duqm. Following an unsuccessful attack on July 29, a drone ripped through the ship’s accommodation area on July 30, killing the Romanian captain and a British security guard. Although maritime confrontations involving Iran, Israel, and the Gulf states have been occurring for years, the nature of the latest incidents highlights the urgent need for collective international action.

The incident only exacerbated deep concerns about Iran’s proliferation of long-range explosive drone capabilities around the region, with unnamed U.S. officials recently telling the Wall Street Journal that Washington was planning to issue sanctions related to the country’s evolving “drone and guided missile precision-strike capabilities.” According to CENTCOM, the loitering suicide drone that hit the Mercer was a larger version of the Iranian delta-wing design used in the September 2019 Abqaiq attack. Both versions were employed by the IRGC Aerospace Force during Iran’s Great Prophet 15 drill this January. And in March, Yemen’s Houthi rebel group unveiled the Waid, a suicide drone identical to the larger Iranian design with a claimed range of 2,500 kilometers.

While the smaller delta-wing drone (apparently called Shahed-131) has an estimated range of 540-900 kilometers, the larger version (Shahed-136) may be able to reach 2,000-2,200 kilometers. U.S., Israeli, and British intelligence have reportedly concluded the Mercer attack originated from somewhere in Yemen, probably launched by Houthis at Iran’s behest. Such drones could also theoretically reach the attack site from Iranian coastal areas (e.g., the IRGC Navy base at Chabahar, around 500 kilometers away). In any case, one of the drones reportedly fired flares when nearing the target in an apparent effort to thwart any heat-seeking shoulder-fired antiaircraft missiles.

Prior to the latest attacks, Iran and Israel had been conducting maritime interdiction and retaliation campaigns against each other for years. Israel’s efforts focused on stopping Iranian weapons from reaching militants in Gaza and Lebanon, and more recently stemming the flow of Iranian crude oil and oil products to Syria and Hezbollah. In response, Tehran targeted commercial ships with ties to Israel as they transited the Gulf of Oman and Arabian Sea.

Open imageiconTable showing Iran-Israel maritime attacks.
Yet the Mercer attack was seemingly designed to cause casualties rather than just damage, with one suicide drone crashing directly into the manned bridge. This fact, coupled with the European nationalities of those killed, should be considered a significant escalation compared to Iran’s previous patterns. And this trend can be expected to cause further loss of life and, perhaps, lost ships.

Precedent for Concerted, Collective Action
When Iraq began its maritime campaign against Iranian oil shipments during the second half of their 1980-88 war, Tehran retaliated by attacking oil vessels belonging to nations that supported Baghdad, resulting in the so-called “Tanker War.” As president and head of the Supreme Defense Council at the time, Ali Khamenei pushed for this retaliatory campaign, part of which involved deliberately targeting the accommodation areas of ships with the intent to cause casualties.

The Tanker War’s lessons for future deterrence should not be overlooked. Iran’s lethal escalation failed to convince its determined adversary at the time to stop attacking tankers. Likewise, the initial U.S., French, and British response—expanding their naval presence in the Gulf region—failed to deter Tehran from targeting ships of all flags. Only after the United States increased its show of military resolve and took bold initiative in using special warfare tactics did Iran back down.

The implications for today’s situation are clear: although publicizing evidence from incidents like the Mercer attack and collectively naming Iran as the perpetrator are important steps, much more will need to be done if the international community aims to avoid or manage further escalation. Tehran’s recent actions show it is unlikely to be shamed into standing down—on August 4, IRGC commander Gen. Hossein Salami visited defensive lines at the Strait of Hormuz and threatened Israel and other enemies with destructive blows if they took any form of military action against Iran; the seizure of the Asphalt Princess followed soon thereafter, possibly for use as leverage in avoiding consequences from the Mercer attack.

As Washington weighs its response and consults with allies, it should consider treating the situation as a broader freedom of navigation issue, which would empower U.S. officials to push for a strong UN Security Council mandate in support of an international naval task force. To be effective, this coalition force would need expanded authorities to protect all shipping traffic in the region in a timely manner, and to engage in defensive combat action if necessary to deter future destabilizing measures by Iran or its proxies.

In addition, thirty-four nations participate in the Combined Maritime Forces, an entity consisting of three Bahrain-based task forces: CTF 150 (focusing on maritime security and counterterrorism), CTF 151 (counter-piracy), and CTF 152 (Persian Gulf security). Members of CTF 150 include Australia, Britain, Canada, Denmark, France, Germany, Italy, the Netherlands, New Zealand, Pakistan, Spain, Saudi Arabia, and the United States. Its main responsibility involves countering nonstate terrorist and criminal threats in the Gulf of Oman, Gulf of Aden, Red Sea, and Indian Ocean. This means that the Mercer Street attack occurred within the force’s jurisdiction but perhaps not within its mission, depending on where the attacking drones originated and other operational or legal details.

CTF-152 is mainly responsible for safeguarding oil and gas infrastructure in the Persian Gulf. Currently under Saudi command, its members include Bahrain, Jordan, Kuwait, Saudi Arabia, and the UAE, with Australia, Britain, Qatar, and the United States periodically assigning vessels, aircraft, and personnel to assist the force.

Although the existence of such coalitions is encouraging, their multiplicity has evidently resulted in substantial overlap and redundancies in their missions and areas of responsibility. Most important, these forces have seemingly hesitated at times to take certain actions in response to attacks and other provocations. Accordingly, a strong Security Council mandate is needed to establish a unified coalition force and command structure, and to give it meaningful, consistent deterrent power. With clear objectives and UN authorities, such a force could effectively counter state and nonstate actors who threaten freedom of navigation in the region.