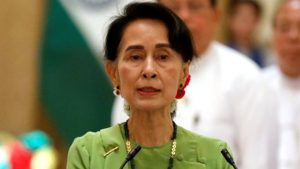 Myanmar’s de facto leader Aung San Suu Kyi is to miss next week’s UN General Assembly as criticism of her handling of the Rohingya crisis grows.
Some 370,000 Rohingya Muslims have crossed to Bangladesh since violence in Rakhine state escalated last month.
Ms Suu Kyi is facing allegations from supporters in the West that she has failed to speak out over the violence.
Myanmar’s military says it is fighting Rohingya militants and denies reports that it is targeting civilians.
A government spokesman for Ms Suu Kyi, Zaw Htay, said “the state councillor will not attend” the General Assembly, where she spoke last year. He did not give further details.
Myanmar conflict: Suu Kyi ‘must step in’
What sparked latest violence in Rakhine?
Another spokesman, Aung Shin, told Reuters news agency that “perhaps” Ms Suu Kyi has “more pressing matters to deal with”, adding: “She’s never afraid of facing criticism or confronting problems.”
Ms Suu Kyi was due to participate in discussions at the General Assembly session in New York from 19 to 25 September.
In her first address to the General Assembly as national leader in September last year, Ms Suu Kyi defended her government’s efforts to resolve the crisis over the treatment of the Rohingya.
Why won’t Aung San Suu Kyi act?
Myanmar’s envoy to the UN has blamed Rohingya insurgents for the violence in Rakhine state and said that Myanmar would never tolerate such atrocities.
But many of those who have fled say troops responded to attacks by Rohingya militants on 25 August with a brutal campaign of violence and village burnings aimed at driving them out.

On Tuesday, Myanmar denounced the suggestion by the UN High Commissioner for Human Rights, Zeid Raad al-Hussein, that its treatment of Rohingya Muslims amounted to “ethnic cleansing”.
The Rohingyas, a stateless mostly Muslim minority in Buddhist-majority Rakhine, have long experienced persecution in Myanmar, which says they are illegal immigrants.
The UN Security Council is due to meet on Wednesday to discuss the crisis.