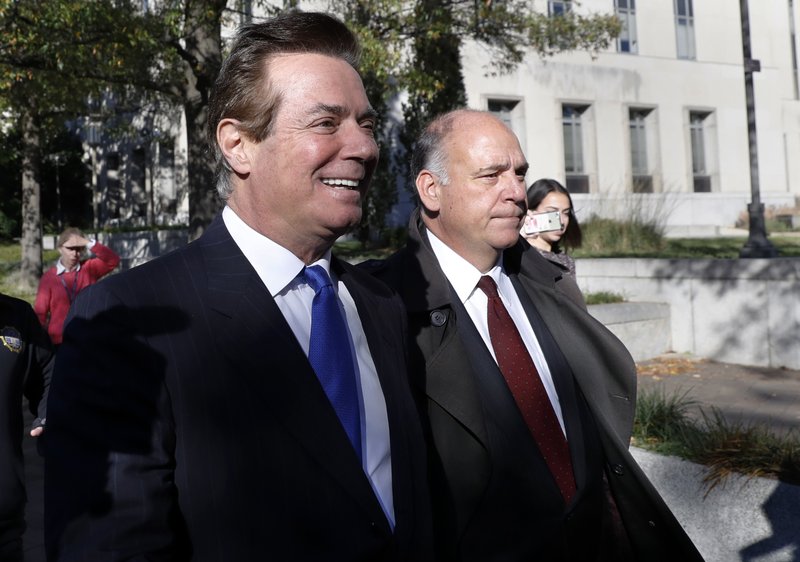 WASHINGTON (AP) — On a black Monday for Donald Trump’s White House, the special counsel investigating possible coordination between the Kremlin and the Trump presidential campaign announced the first charges, indicting Trump’s former campaign chairman and revealing how an adviser lied to the FBI about meetings with Russian intermediaries.

The formal charges against a total of three people are the first public demonstration that special counsel Robert Mueller and his team believe they have identified criminal conduct. And they send a warning that individuals in the Trump orbit who do not cooperate with Mueller’s investigators, or who are believed to mislead them during questioning, could also wind up charged and facing years in prison.

Paul Manafort, who steered Trump’s campaign for much of last year, and business associate Rick Gates ended the day under house arrest on charges that they funneled payments through foreign companies and bank accounts as part of their private political work in Ukraine.

George Papadopoulos, also a former campaign adviser, faced further questioning and then sentencing in the first — and so far only — criminal case that links the Trump election effort to the Kremlin.
Manafort and Gates, who pleaded not guilty in federal court, are not charged with any wrongdoing as part of the Trump campaign, and the president immediately sought to distance himself from the allegations. He said on Twitter that the alleged crimes occurred “years ago,” and he insisted anew there was “NO COLLUSION” between his campaign and Russia.

But potentially more perilous for the president was the guilty plea by former adviser Papadopoulos, who admitted in newly unsealed court papers that he was told in April 2016 that the Russians had “dirt” on Democratic rival Hillary Clinton in the form of “thousands of emails,” well before it became public that the Democratic National Committee and Clinton campaign chairman John Podesta’s emails had been hacked.

Papadopoulos was not charged with having improper communications with Russians but rather with lying to FBI agents when asked about the contacts, suggesting that Mueller — who was appointed in May to lead the Justice Department’s investigation — is prepared to indict for false statements even if the underlying conduct he uncovers might not necessarily be criminal.

The developments, including the unexpected unsealing of a guilty plea, usher Mueller’s investigation into a new, more serious phase. And the revelations in the guilty plea about an adviser’s Russian contacts could complicate the president’s assertions that his campaign never coordinated with the Russian government to tip the 2016 presidential election in his favor, the central issue behind Mueller’s mandate.

Mueller’s investigation has already shadowed the administration for months, with investigators reaching into the White House to demand access to documents and interviews with key current and former officials.

The Papadopoulos plea occurred Oct. 5 but was not unsealed until Monday, creating further woes for an administration that had prepared over the weekend to deflect the Manafort allegations. In court papers, Papadopoulos admitted lying to FBI agents about the nature of his interactions with “foreign nationals” who he thought had close connections to senior Russian government officials.

The court filings don’t provide details on the emails or whom Papadopoulos may have told about the Russian government effort.

Papadopoulos has been cooperating with investigators, according to the court papers. His lawyers hinted strongly in a statement Monday that their client has more testimony to provide.

There, too, the White House scrambled to contain the potential fallout, with press secretary Sarah Huckabee Sanders contending that Papadopoulos’ role in the campaign was “extremely limited.” She said “any actions that he took would have been on his own.”

The criminal case against Manafort, who surrendered to the FBI in the morning, had long been expected.

The indictment naming Manafort and Gates, who also had a role in the campaign, lays out 12 counts, including conspiracy against the United States, conspiracy to launder money, acting as an unregistered foreign agent, making false statements and several charges related to failing to report foreign bank and financial accounts. The indictment alleges the men moved money through hidden bank accounts in Cyprus, St. Vincent and the Grenadines and the Seychelles.

In total, more than $75 million flowed through the offshore accounts, according to the indictment. Manafort is accused of laundering more than $18 million.

Outside the courthouse, Manafort attorney Kevin Downing attacked the charges and said “there is no evidence that Mr. Manafort or the Trump campaign colluded with the Russian government.”

Manafort’s indictment doesn’t reference the Trump campaign or make any allegations about coordination between Russia and campaign aides. But it does allege a criminal conspiracy was continuing through February of this year, after Trump had taken office.

Gates personally directed the work of two prominent Washington lobbying firms, Mercury LLC and the Podesta Group. The indictment doesn’t refer to the companies by name, but the fallout at one was swift.

Prominent Washington lobbyist Tony Podesta, a Democrat and brother to John, resigned Monday, seeking to avoid further enmeshing his firm in the controversy, according to a person familiar with the decision who spoke anonymously to preserve relationships with former colleagues.

Specifically, the indictment accuses Manafort of using “his hidden overseas wealth to enjoy a lavish lifestyle in the United States, without paying taxes on that income.” That included using offshore accounts to purchase multimillion-dollar properties in the U.S., some of which the government is trying to seize.

The indictment also cites more than $900,000 in payments to an antique rug store, about $850,000 to a New York men’s clothing store and the purchase of a Mercedes Benz and multiple Range Rovers.

Manafort also had registered with the Justice Department as a foreign agent for parts of Ukrainian work that occurred in Washington. The filing under the Foreign Agents Registration Act came retroactively, a tacit acknowledgment that he operated in Washington in violation of the federal transparency law. The indictment Monday accuses Manafort and Gates of making several false and misleading statements in that FARA filing.