Iraq occupies an important place in Iran’s strategic security planning to implement its plans. We have seen this clearly when the severity of the international sanctions and its impact on Iran have become more acute where Iraq has become a back door and a parallel path to secure Iran’s financial and technical needs, all this was made possible by the invasion and occupation of Iraq by the United States.
Iraq is the strategic axis of Iran for many reasons, the most important of which are the following
• Iran’s misperceptions that Iraq is part of Iran’s historical, geographic and sectarian expansion, and is an Iranian region and not an independent state. This is confirmed by the statement of the chief of staff of the Iranian army, Fayrouz Abadi that the Gulf and the region have always been the property of Iran and that Gulf oil is located in Persian regions.
• Iran sees Iraq as a gateway to control and transit to the rest of the Arab world to spread the ideology of the Iranian revolution, and the lack of Iranian control over Iraq means isolating Iran from the Shiite presence in Syria and southern Lebanon.
• Iran believes that Iraq is a stumbling block to the expansion of Iranian influence to the Gulf, which most of its population differs in terms of doctrine, and made this clear during the periods when the Iraqi state is strong economically and militarily.
Iran’s commercial diplomacy in Iraq gained control of the Iraqi economy after 2003 through a number of agreements with Baghdad that is expected to have a positive impact on Iran’s economic activity in Iraq. The most important of these is an agreement whereby Baghdad reduced its customs tariff to Iranian goods ranging between 0 and 5%, and the elimination of control process over the Iranian export to Iraq to facilitate trade move.
If we compare the volume of bilateral trade between Iraq and Iran from the 1970s to 2017, there is a development in trade and economic relations worthy to be noted. In 1975, the volume of trade exchange between Iraq and Iran amounted to about 200 million dollars and the trade between the two countries stopped between 1980 and 1988, between the two countries with an exception of border smuggling between the two parties, and then become according to the following table. 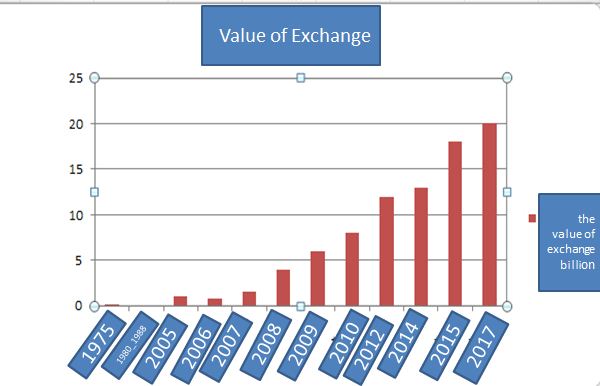 Iraq fluctuates from year to year between Iran’s first and second trading partner, continuing to be the first importer of its non-oil goods, importing 72 percent of all domestic Iranian goods.
The head of the Tehran Chamber of Commerce, Yahya al-Ishaq, said the trade volume between the two countries would reach between 20 and 25 billion dollars in the coming years. Of course, trade relations between Tehran and Baghdad will continue to be unequal and in favor of Tehran.
Iran’s exports to Iraq and its economic services are divided into three types: 1. Energy goods (natural gas and electricity), 2. Non-oil items (cars, food items, household items and handicrafts), 3. Technical and engineering services (energy, , Health and transport).
Through these exports, Tehran acquires
17.5% of the Iraqi market after it was acquired only 13% before the rise of the Islamic state organization, according to the Secretary-General of the Chamber of Commerce of Iran, Iraq Najabi Shirazi. Tehran is targeting, according to Shirazi, the acquisition of 25% of the Iraqi market in the coming years.
Despite this, Iranian exports to Iraq continue to face bureaucratic obstacles at the border crossings leading to Iraq because of the overlap of the work of a number of Iranian institutions. Therefore, pressure groups of Iranian traders and exporters seek to resolve these problems. The secretary of the Development Authority for Trade Relations between Iran and Iraq Rustom Qasimi called for the unification of the management systems at the border crossings, pointing out the presence of 11 institutions that hinder the expansion of trade and export because of the complexity of the work.
According to political and economic experts that the reality of the situation in Iraq today is an extension of Iranian influence that is so-called by soft power , where the influence of Iran has dominated over the Iraqi economy that in the field of local industries, several industries have been disappeared , including the Iraqi brick industry known for decades, It has a presence in favor of importing bricks from Iran, including simple industries such as refrigerants and other ones that have disappeared in Iraq in favor of imports from Iran.
The balance of trade is almost equal to 1-10% for Iran, which means dumping Iraq with Iranian goods, which are linked to the contracts signed by Iran and Baghdad, all of which are for the benefit of Iran. For example, Iraq allowed Iran only among the world to open a 100% Iranian foreign ownership bank while in other banks, the capital must be Iraqi or an Iraqi partner, and use such a bank an outlet to compensate Iran in the case of sanctions.
In other words, the Iraqi economy is gradually absorbed and contained by Iran, so that the Iraqi economic forces will find its economy and its lives linked to Iranian capital.
In addition to this soft power that works to control Iraq, in 2008 international estimates indicated that there were two thousand Iranians came to the scientific Hawza ( Hawza ilmiyya Najaf ) in Najaf and Karbala as students or religious men , at least one third of them are intelligence men who support the Iranian presence there, this is a fact that those who rule Iraq are to blame .
The claim of concern for the Iraqi people is similar to that of the Americans who eventually destroyed Iraq. They also claimed that the American presence in Iraq was a threat to Iran. Iran acted in defense of itself by making Iraq a swamp of Americans. And to be a swamp, It increased the erosion of Iraq’s infrastructure by supporting the violence in the country
When the United States said it wanted to get out of Iraq, the Iranians were pretending to be ready to rebuild Iraq and secure security there,
And experts called for the establishment of healthy and proper relations between Iraq and Iran and does not turn into Iranian revenge in a soft way to turn Iraq into an arena of influence and extension of Iran, and this is a political reality, as Iraqi traders in Iran go to free zones with Iran without a visa, and there are relations at the level of provinces Such as the neighboring provinces of Maysan and Basra, where the border is open for going and coming where the Iranians received a 1.5 billion-dollar project and became a political paper in the hands of the Iranian contractor to appoint and operate the people.
Tehran’s economic actors appear not only to play a greater role in infrastructure projects, they also may want to engage in joint economic entities with Baghdad so that they can penetrate economic institutions more by establishing local pressure groups that direct the decision-making centers in their favor noting that Iran seeks to acquire 5-10% of development projects in Iraq.