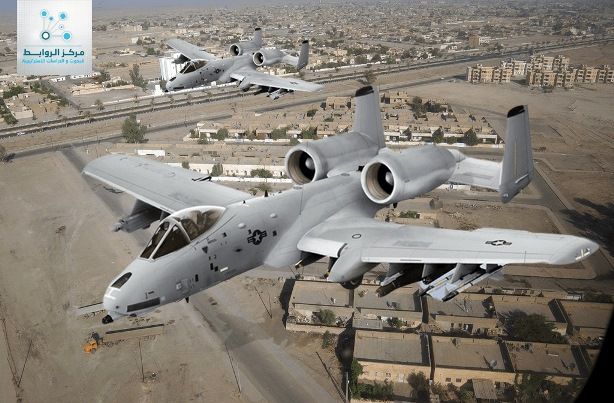 An intelligence information obtained by Rawbet center for Research and Strategic Studies, that a- 10 US aircraft, landed in Baghdad airport.

However this kind of the plane was participate in many wars  at different  countries as Vietnam since 1972, decisive storm (Yemen), Kosovo, Afghanistan, and the war occupation of Iraq.

“A-10″ Warthog is support the ground forces to release all areas under “ISIS” control, it has cannon and missiles and provide the information for the destroyed places to prepare to the second airstrikes against enemy. The secondary task of this fight plane is research and rescues the special operations, which it works behind enemy “ISIS”.

In addition, A- 10 have a little ability to dog-fight, one of the success stories of this plane was during the gulf war, it participate around 144 Thunderbolt in the war , destroyed 950 tanks and more than 1000 Iraqi truck, also launched around 90% bombs to use it in the war.

Actually this version have a several advantages which can be a long time in fighting, having inside the pilot room armored shield coated with titanium, and the aviation control system, separated fuel tanks, and have ability to return to air force base, even being struck. This plane described as scary and armored against rockets and can drop to 50 feet from the ground targets.

The Special sources stated this plane was designed to destroyed Russian tanks, so called “warthog”, “lethal tanks”. Plane is work by two engines and piloted one, and called on its machine name “mass murderer” as he could launch 4,200 rounds of 7 nozzles each cycle per minute, and carrying a large number of rockets and  bombs 500 pound.

On the other side of this vision, the pilot can attack ground targets, which sees the naked eye, it can fly at an altitude of less than 1,000 feet for long periods of time, and able to carry out its tasks for the night because it provided a night-vision system.

This scary plane can achieve the target for 800 miles, and there are 707 planes available which can use it, source confirmed  just the country have this type aircraft is USA.

Media reports stated that US decided to send collection of this plane to Iraq, and attack “ISIS” But the plane has been a subject of recent controversy which Iraq will recognition, for need the U.S.-led coalition airstrikes to get away “ISIS” members.  While Takrit battles discovered that its need to US Aviation to support Iraq forces, after more than 46 days, popular mobilization cannot entered to the Takrit.

The Prime minster of Iraq hayder Al- Abadi haven’t any authorities in security organizations, which dominated by his political rivalry whom support the militias, in order to help  reducing the resistance faced by is polices in Parliament, especially from the militant (Shia), which hinder efforts to communicate with suni Arabs and returned to political life.

on the other hand, Abadi is not get the political support and motivation from US, The rise of the militias roles fighting “ISIS” by leading Iranian Militias at political and security levels, which is Reinforcing divisions within Iraqi society.

The US Supported Abadi nominations for the position PM, IT Seeks to re- balance the power between the Us and Iran in Iraq, after noori al maliki  who is shared and spread  sectarian conflict in Iraq, as possible Iran to implement their political agenda, the aim of this agenda is make the Us government worried about Iranian interference.

The guardian news stated an article” Iran and US have common interests in Iraq”, is they will cooperate with us!!

Iraq for the Americans, like who is built a house but is not good, then Iran took control of half of it, which requires not to loss America efforts, in addition will be Consequences in the region, even that Us takeover Iraq, there is some lacking tools such as political, economic and diplomatic can influence in the political, economic and strategic trends.

Here, Washington appeared like passing through front the Bagdad events, so in this case US will not be able to control the events without an active strategy in Iraq including the military approach to ensure their interests.

Iranian American have an agreement to put US role in coalition airstrikes at Iraq and Syria,  so US isn’t share the ground military forces in the war with the exception of US advisers and air strikes, which explains the presence of these horrific planes, used in the upcoming battles.

Finally, the aims of use this plane in Baghdad airport to broadcast several political and Military Messages, and increase the power to diplomatic American team whom are working in Baghdad. For Iraq, it will support forces which hit a historic defeat of Mosul and  United States  will be afford  the biggest part of it.

The Terrorism still have in a dangers way in this situation, silent American and Iranian support, so US will achieve all their interest in region!