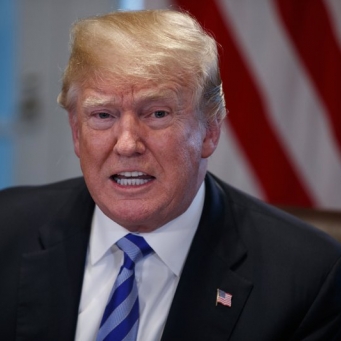 On day four of Donald Trump’s impeachment trial it was the turn of the defence to make its case.

Earlier this week, Mr Trump’s legal team asserted that the entire impeachment trial was unconstitutional and a violation of the former president’s due process rights. They lost that argument, so now they had to set about defending the former president on the merits of the case.

All in all, it took Trump’s lawyers just over three hours to present their arguments – a far cry from the 13 hours the impeachment managers took to lay out their prosecution. For the defence, less could be more, as it already seems clear that enough Republicans will stick by the former president to assure a not guilty verdict.

Live updates and analysis
Fact checking Trump’s defence
Here are some of the ways they went about it.

The Democrats did it, too
During their defence of the president, Trump’s lawyers tried to turn the words of Democrats against them.

They played clip after clip of members of the House of Representatives, including lead impeachment manager Jamie Raskin, contesting the results of previous presidential elections. If Democrats can challenge the election results, Trump’s lawyers said, why can’t Trump?

media captionJoe Biden dismissed Democrats who contested 2016 election results
In another video montage, the lawyers featured Democrats praising and encouraging the Black Lives Matters demonstrations of 2020, suggesting – as the clips flipped to acts of violence during those protests – that Democrats used rhetoric as bad or worse than Donald Trump.

He added that he was not suggesting that Democrats should face punishment. Rather, heated rhetoric has long been a part of US politics.

It might be time to cool down the vitriol, van der Bleen said, but Trump’s speech certainly wasn’t grounds for impeachment and conviction.

The Democrats misrepresented the president
When Trump lawyer David Schoen got his first crack at defending the president, he went on the attack against the Democratic impeachment managers. He accused them of selectively editing Trump’s speeches to make them seem more inflammatory than they were.

He played the entirety of the ex-president’s now infamous “good people on both sides” response to the 2017 white supremacist rally in Charlottesville, Virginia, that turned violent. Trump, Schoen noted, was referring to peaceful protests the night before. (Although he did not mention that the Friday night gathering featured torch-bearing men chanting “Jews will not replace us.)

Did Trump’s words at rally incite the riot?
In one rather remarkable twist, Schoen suggested that a Trump supporter who tweeted that she was “bringing the Calvary” to support Trump on 6 January was a reference to the hill on which Christ was crucified, not a typo for cavalry.

According to journalists watching the proceedings live, that prompted Democratic senators in the chamber to exchange incredulous looks.

A play to the base
At times, Trump’s defence presentation felt like it was drawn from the conservative media ecosystem that fuelled the former president’s political rise.

The video montages – frequently featuring the same handful of clips packaged in different ways, accompanied by foreboding music and rapidly edited scenes of fire and violence – would seem familiar to regular viewers of evening opinion programmes on Fox News.

The clips featured many of the Democratic politicians who have become villains for the right – Elizabeth Warren, Bernie Sanders, Chuck Schumer, Nancy Pelosi and Ayanna Pressley – as well as media figures like CNN’s Chris Cuomo and Hollywood stars such as Madonna and Johnny Depp.

media captionHow Mike Pence became a villain in Trump world
Trump’s defence also used lengthy excerpts of Trump speeches, some of which included attacks on Republicans as well as Democrats to cheering crowds, as if to remind the Republican senators sitting in judgement of the support Trump still enjoys within the Republican Party. It could also be an attempt to shore up that Trump base after two days of attacks from the Democrats.

This case isn’t just about the law, after all. It’s about politics.

Donald Trump’s free speech
A large portion of the president’s defence on the merits has been built around the assertion the First Amendment to the US Constitution guarantees free speech rights – rights they say Trump was exercising on 6 January.

If the Senate voted to convict the president for his words, they argued, it would have a chilling effect on political speech across the political spectrum and open any politician up to punishment.

“This is ordinary political rhetoric that is virtually indistinguishable from the language that has been used by people across the political spectrum for hundreds of years,” van der Veen said.

He added that House impeachment managers cited it in their presentation as a way to intimidate Trump’s defence team. “How dare you?” he said, turning to where his legal opponents were sitting.

It wasn’t exactly the most robust legal argument, but the confrontational attitude will probably play well with Trump back in Florida. What’s more, the suggestion that any politician might be next to face constitutional “cancelling” might find a friendly ear among the senators sitting in judgement.

Did Trump know Pence was in serious danger?
After the defence rested, it was time for questions and Republican Senators Mitt Romney and Susan Collins just posed one of the more interesting queries – to both sides – so far during the trial’s four-hour question time.

When Donald Trump sent a disparaging tweet about Mike Pence, they asked, did he know that the vice-president had been removed from the Senate chamber by Secret Service for his safety?

Answering for the impeachment managers, Congressman Joaquin Castro said that the president must have known that Pence was being threatened by the mob. The violence was being broadcast on national television, the White House has the extensive communications facilities and the president himself had just been informed by Alabama Senator Tommy Tuberville that Pence had been evacuated during a phone conversation the two had at roughly the same time.

media captionSee how close the mob got to Mike Pence, Mitt Romney and other lawmakers
Responding for Trump’s defence, lawyer Michael van der Bleen said Trump did not know. He added that the House Democrats had done no investigation into the matter during their “rushed” impeachment proceedings and, besides, Trump’s actions during the Capitol riot were not included in the impeachment article, which dealt with inciting an insurrection.

The question – from two Republicans who are likely to vote to convict – gets to the heart of the case against the former president. Did Trump’s actions during the riot – including his condemnation of Pence – indicate that he knew that violence was likely and that he welcomed and encouraged it?

The House impeachment managers insist the answer is yes.