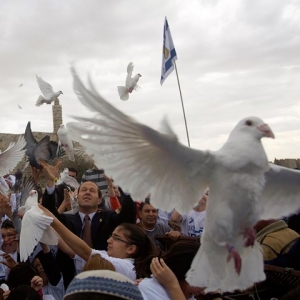 On February 1, The Washington Institute held a virtual Policy Forum with Ambassador Yousef Al Otaiba, Samer Khoury, Fleur Hassan-Nahoum, and David Makovsky. Al Otaiba is the UAE’s ambassador to the United States and a minister of state in the Emirati government. Khoury is chairman of the Consolidated Contractors Company, the largest construction firm in the Middle East. Hassan-Nahoum is deputy mayor of Jerusalem in charge of foreign relations, international economic development, and tourism. Makovsky is the Institute’s Ziegler Distinguished Fellow and author of its new Transition 2021 memo “Building Bridges for Peace: U.S. Policy Toward Arab States, Palestinians, and Israel.” The following is a rapporteur’s summary of their remarks.

Yousef Al Otaiba
Emirati normalization with Israel is proceeding positively as anticipated, and the UAE is witnessing robust bilateral business deals, trade, and investment that will only increase post-COVID. When the Israeli prime minister visits next week, cooperation on research, investment, trade, and technology will be addressed. In addition to the economic impact of normalization, an unanticipated and encouraging level of people-to-people engagement has materialized. Yet it remains unclear if the Biden administration will engage with normalization as energetically as the Trump administration did. The Biden administration has thus far focused on addressing the pandemic.

Fundamentally, the Abraham Accords occurred in order to prevent Israeli annexation of the West Bank and save the two-state solution. I had many personal discussions with White House officials before the accords to convey the significant regional and international implications of Israeli annexation. The accords were not a betrayal of the Palestinians; rather, they halted the advancement of a one-state solution. At the end of the day, the two-state solution is contingent on Israeli-Palestinian progress and engagement. If there is a plan that requires the participation of a team such as the Arab Quartet, the Emirates would be willing to participate. Presently, such a plan that improves Palestinian quality of life does not exist.

Regarding U.S. legislative review of the F-35 deal with the Emirates, this is a routine exercise and Congress should review the sale. Those investigating will find that the deal was achieved through a straightforward, by-the-book negotiating process. It is incorrect to characterize the review as freezing or pausing the sale. The deal serves Emirati, Israeli, and American interests, and I am confident it will be approved. If the United States is turning its focus toward great-power competition with China and Russia and strives to have a smaller regional presence, its Middle East partners must be equipped with sufficient tools. The sale is a net benefit for the United States.

Ultimately, a warm peace between the Emirates and Israel is contingent on people-to-people relations, inclusivity, and mutual respect. The UAE is positioned to have a healthy, warm relationship with Israel. Even if the geopolitical factors leading to the Abraham Accords are stripped away, peace with Israel is intuitive. With consideration of geopolitical factors, it makes even more sense. The Emirati business community and young people are the constituencies most eager to take advantage of normalization, and they appreciate the opening of one of the region’s most dynamic economies. Further, if the Abraham Accords enable more business in Africa benefitting Israel and the UAE, that is a positive development.

Samer Khoury
Although Palestinians were not part of the Abraham Accords, they would have appreciated some mention of the two-state solution, East Jerusalem, a Palestinian state based on the 1967 borders, and the illegality of settlements under international law. Yet Palestinians are prepared to move forward. Their business community supports the accords, advocating for any commercial interaction between Israel and Arab states that moves the peace process forward, provided that Palestinians are not undermined.

There are six areas in which the accords can be leveraged for Palestinian economic benefit. For each objective, Israel must be willing to grant increased access to the Palestinians:

Development of Area C, which has the potential to generate $3 billion in GDP
Development of water resources for Palestinians
Attaining Israeli permission for 4G and 5G, which are essential for competition
Emirati investment in East Jerusalem to maintain its Arab culture, history, and tradition
Freedom of movement for Palestinian businesspeople
Development of natural resources
The United States and the Palestinians must restore their previous diplomatic relationship. Quick wins by the Biden administration are attainable—for example, the Palestinian leadership is addressing the issues of incitement and prisoner payments internally.

Regarding COVID-19, Palestinians are expecting 2 million vaccine doses from Oxford in mid-February, arriving in biweekly intervals. In addition, Russia has donated 10,000 vaccines for delivery in February or March, while Israel has provided vaccines to Palestinian hospitals.

As the Palestinian leadership is aging, it is crucial to give leadership opportunities to younger generations. To this end, legislative and presidential elections will be held in May. To participate in the election, Hamas must abide by the commitments laid out in the Palestine Liberation Organization charter, which include recognizing Israel and preventing terrorism. The legislative election will occur first, followed by the presidential election and lastly the PLO election. Assistance from the Biden administration is needed to maintain pressure on Hamas, ensuring that the group does not walk out halfway through the election cycle.

Fleur Hassan-Nahoum
The recent normalization agreements are distinct from Israel’s past treaties with Egypt and Jordan. At their core, the Abraham Accords are not just about strategic interests—they are based on bilateral cooperation that aims to create prosperity for the region.

Palestinians and Arab Israelis are taking part in the benefits of normalization. The city of Jerusalem is a natural bridge to the Gulf states, as 40 percent of its population is Arab. The accords will open a new era of Muslim tourism to East Jerusalem. The city is presently being developed for tourism, commerce, and high-tech initiatives. East Jerusalem has the potential to become a research and development center in the Middle East.

Israelis have long held an existential fear of elimination. The Abraham Accords give them a feeling of security, confidence, and belonging in the region and represent an unprecedented historical shift. It is up to the Israelis, Palestinians, and regional partners to decide what the focus will be in the coming decades—continuing the conflict or directing energy toward public health, food security, and other issues. Sharing the region is a necessity, as the Palestinians will be Israel’s closest neighbors forever.

David Makovsky
The other panelists have presented a hopeful picture of the economic and cultural fruits of peace. Indeed, the context underling the Abraham Accords is a sharp shift away from the Arab Peace Initiative of 2002, which was predicated on the idea that Arab states would indefinitely defer their relations with Israel until the Palestinian issue was resolved. That paradigm was ineffective for eighteen years, and the region and world have changed dramatically since then. Arab countries no longer want to defer their national interests.

Over the past two U.S. administrations, greater self-sufficiency in the energy sector and a gradual pivot to Asia have contributed to U.S. retrenchment in the Middle East. In response, regional actors have sought out strategically aligned neighbors, while oil-producing countries have considered how to diversify their economies away from fossil fuels. These factors culminated in the Abraham Accords, which marry Gulf capital with Israeli entrepreneurial spirit.

The United States has attempted to comprehensively solve the Israeli-Palestinian conflict four times: in 2000, 2007-2008, 2013-2014, and 2020. All four attempts failed. Today, the Venn diagram between official Israeli and Palestinian views on the core issues does not overlap, and resolving the conflict is not feasible. Yet the United States cannot ignore the problem, since that would enable a slide to a one-state outcome that inalterably cripples Israel’s identity and Palestinian dignity. Two states cannot be achieved at the moment, but they cannot be abandoned either.

Individuals on both edges of the political spectrum tend to view the Abraham Accords as a bypass road around the Palestinians. In actuality, the accords are a bridge, creating the potential for parallel, partial moves that advance Israeli-Palestinian peace.

Such moves may include Saudi Arabia, the biggest prize for Israel. As long as King Salman is alive, full normalization with the Saudis is likely unattainable. Yet Riyadh’s consent was essential for Bahraini normalization, and the Saudis have also allowed overflights from Israel to the UAE. Most strikingly, former Saudi ambassador Bandar bin Sultan appeared on the news channel Al-Arabiya for a series that discussed reshaping the Israeli-Palestinian narrative and highlighting peace opportunities the Palestinians have missed. Going forward, Saudi Arabia could conceivably take partial steps toward Israel—perhaps a tourism or investment office—on the road to full normalization.

If Israel disavows settlement activity outside the West Bank security barrier, the United States should reciprocate by differentiating its policy toward settlement activity. In tandem with partial Saudi normalization moves, such a U.S. approach would give Israel both a key incentive to avoid jeopardizing the two-state solution and a clear choice. When given a similar choice between Emirati normalization and West Bank annexation, the vast majority of Israelis preferred normalization. Washington should therefore distinguish between settlements beyond the barrier, which are inconsistent with the two-state model, and settlements within the barrier, which are consistent with two states. This initial policy would not entail addressing settlements already in existence or condoning settlement activity; instead, it would focus on leaving the door open to a two-state solution.

In return for an Israeli commitment to the principle of land swaps and halting construction outside the barrier, Saudi Arabia might be willing to take additional steps toward normalization. In any case, a grand political deal with the Palestinians is not feasible today, so the Biden administration will need to think and act creatively to preserve the two-state solution.