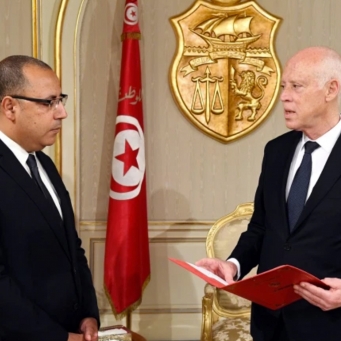 Just five months after Tunisian Prime Minister Hichem Mechichi formed his government, his mid-January attempt at a far-reaching Cabinet shuffle was blocked by President Kais Saied, who refused to swear in the new ministers, accusing some of them—whom he did not name—of corruption. The resulting political deadlock opened a new chapter in the crisis of government that began shortly after the 2019 legislative and presidential elections. Those elections ushered in a polarised, fragmented parliament as well as a president who makes no bones about his dislike of political parties and the entire system of parliamentary representative democracy.

The crisis that has paralysed governance in Tunisia is multidimensional. The latest episode was set off by Mechichi’s decision to dismiss ministers seen as friendly to the president. But more fundamentally, he and Saied are at loggerheads over their different conceptions of the function of the prime minister’s office and the limits of his authority and the limits of presidential interference in the operation of government. Complicating matters further is the tense relationship between the president and parliament, both of which also have incompatible interpretations of their constitutional prerogatives. In the absence of a constitutional court, which has yet to be appointed, there is no final arbiter to definitively resolve these disagreements. Moreover, the mutual distrust and antipathy between the president and parliament precludes hammering out a solution to basic political questions like the appointment of Cabinet personnel; instead, what are essentially political disagreements snowball into constitutional arguments.

A month after the president refused to swear in new ministers, Mechichi’s government continues to function with a severely reduced Cabinet of ministers. As street protests by both pro- and anti-Saied factions now spread to several Tunisian cities, the crisis of government could unfold in a number of ways.

Firstly, the president may hold to his position, leaving Mechichi with four choices, none of them good. Mechichi could push through his new ministers over the president’s objections, or he could suspend the new appointments and work permanently with a scaled-down Cabinet. Both of these are liable to simply delay or escalate the crisis further. Alternatively, he could replace the allegedly corrupt ministerial candidates to whom the president objects. This would allow all parties to save face, but it requires Saied to name names, which could expose him to legal action. In any case, it is widely believed that the president objects to the entire government, not simply specific ministers. Finally, Mechichi could resign, leaving the president to choose another person to form a new government. Currently, Mechichi and his parliamentary supporters are publicly rejecting this option, but certain shifts could change Mechichi’s mind. This would do little to resolve the overriding political impasse between the president and parliament, however, and a third government may find itself in the same untenable position as the first two.

Secondly, President Saied may partially or wholly back down. A full retreat is unlikely given his combative, even vindictive, temperament, but he may be persuaded to reach an unwritten agreement on ministerial positions with Mechichi if he comes to see that his rejectionist position is hindering the functioning of state institutions, which touches on one of his core constitutional duties.

Thirdly, the parliament may withdraw confidence from the government. This is unlikely in the short term since a majority voted for it just a few weeks ago. It is possible, however, if all parties can agree to a national dialogue to resolve the crisis, including its socioeconomic dimensions. Indeed, this initiative is currently gaining momentum, with recent support voiced by the Tunisian General Labour Union, the Democratic Current, Ennahda and the head of the parliament.

As more time passes and both executive leaders dig in further, a national dialogue is the best option for overcoming the political deadlock, although it will require time. Another, more durable option presents itself as well, although it remains extremely unlikely for the foreseeable future: the formation of the long-deferred constitutional court, which could resolve the Cabinet shuffle crisis and as well as larger questions about the separation of powers. But given the mistrust and factiousness within the parliament, the assembly is unlikely to agree on the four justices it is empowered to appoint to the court; nor is there any guarantee that the president will name his four appointments to the court in turn. If a national dialogue is a convened, however, the institution could finally see the light of day. That, along with a new election law that allows for the formation of a clear parliamentary majority, would do much to provide for more coherent governance and head off similar crises in the future.