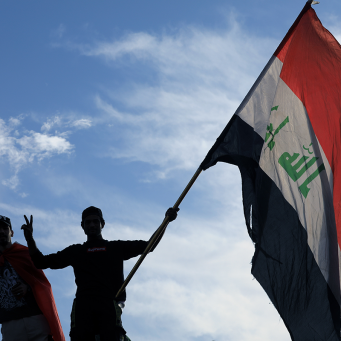 In 2003, following the toppling of the regime of Saddam Hussein, Iraqis had high hopes for fundamental change in their lives after three and half decades of tyranny. In the years since, however, many of these expectations have gone unfulfilled.

Iraq’s post-2003 political system has been characterized by instability driven by a variety of factors, including but not limited to ethnic and sectarian tensions, interventions by neighboring countries, and security challenges created by terrorist groups, militias and gangs, and the remnants of the previous regime. In addition, the political landscape during almost every Iraqi administration since 2003 has been dominated by weak, divided coalitions incapable of implementing much-needed structural reforms. This failure of governance was compounded by the lack of efficient institutions and a bureaucracy that did not even recognize the legitimacy of the new system. Iraq’s government institutions were built to serve a system wholly different from the democratic federal constitutional one that was meant to be established following the 2005 referendum and its bureaucracy remained full of officials, far down into the ranks, chosen on the basis of loyalty under the previous regime. This issue was not addressed by the process of de-Baathification, which in application often ended up exacerbating problems of corruption and favoritism, and bureaucratic opposition and loose chains of command have continued to hinder the implementation of many key laws, regulations, and decisions.

The fall of Mosul and many other Iraqi cities, towns, and villages during the summer of 2014 to a newly emerged and expanding ISIS played an important role in changing the dominant political equations in the country. ISIS represented an existential threat to Iraq, one that was qualitatively different from previous terrorist groups like al-Qaeda. The response to this threat was equally unprecedented on both the security and political fronts. On the former, the religious authority in Najaf, for the first time in nearly a century, intervened by issuing a fatwa for jihad, while on the latter Grand Ayatollah Ali al-Sistani, also for the first time, asked the Islamic Dawa Party in writing to change its candidate for prime minister, Nouri al-Maliki, even though his coalition won an overwhelming majority of votes in the 2014 election. The main challenge to the political process, however, was the result of the decline in trust in the government by a number of segments of the population that had welcomed the fall of the previous regime. This decline in trust began soon after 2003 and grew steadily worse in the years that followed.

The level of frustration among Iraqis reached a boiling point in late 2019, giving rise to mass public protests in Baghdad and many southern Iraqi cities in October. While protests have been a recurring feature of life in Iraq since 2003, the October 2019 protests were fundamentally different in terms of the extent of participation and their geographical spread, as well as the number of people injured and killed. Although it has been more than 18 months since then, many of the big questions raised by the protests remain unanswered, most of which revolve around the sustainability of the post-2003 political system and its ability to correct itself over time.

Reports from international energy organizations have laid out multiple scenarios for the future of oil. With the increase in global interest in environmental issues, the world is rapidly moving away from oil and toward greater use of clean, renewable, and alternative sources of energy for power generation and transportation. Therefore, Iraq’s dependency on oil as its main — and sometimes only — commodity to finance its expenditures represents an ever-increasing risk. The coming Iraqi governments will have to face the dilemma of the worsening deficit by generating sufficient revenues to run the apparatus of state, including paying the salaries of the armies of government employees as well as creating new jobs for the increasing number of young people entering the labor market. The painful collapse of the system is inevitable unless fundamental and comprehensive reforms are implemented — and quickly. The recent government white paper presented different “urgent remedies” to address some of the major failings of the Iraqi economy. However, given its lack of teeth and a real mechanism for implementation, the white paper is likely to join other previous studies and policy papers gathering dust on the government’s bookshelves.

In order to answer the question of whether the Iraqi political system is able to reform itself, it is first necessary to review previous attempts that failed. There are many reasons why, but the most important is the lack of political support and the absence of political and popular will to foot the bill for reform.

Moreover, the election law is not the only factor that determines the outcomes of the electoral process leading to the formation of a government. The current political system is intentionally designed to impede the creation of an effective government capable of carrying out reforms. It is governed by a party system that has resulted in a monopoly over political decisions by a small group of leaders, most of whom were not elected in a democratic or transparent process. Nonetheless, the government is usually formed according to formal rules and procedures that appear, at least on the surface, to be democratic.

Reforming the political system is key to avoiding imminent collapse

One of the great paradoxes in Iraq is that its party system cannot be described as democratic, and therefore, it is natural that the system is unable to produce true popular representation. Voter participation in elections has fallen over time, reaching a low of 44% in 2018. The main parties in Iraq have been led by the same people for the past two decades. Although many of them have witnessed divides and the rise of new splinter parties, the majority of these new parties are not democratic either. The dominant feature of Iraq’s parties is that they revolve around the personality of a single leader who will eventually be succeeded by one of his family members. Internal party elections, if they take place at all, are a mere formality rather than a means of ensuring the transfer of power to new party cadres, most of which were established to represent the interests of a family or limited leadership, even if they took on national, religious, sectarian, or regional trappings.

Reforming the party system in Iraq is a necessary precursor to reforming the electoral process so that it can produce a functioning and effective government and a stable parliament. Therefore, reforming the political parties law will be as important as reforming the electoral law. The presence of many parties does not necessarily indicate a mature political process, but rather reflects a state of confusion and political disorientation. While citizens have the right to join or switch between these parties freely, the bulk of them are “seasonal” parties that are formed before the elections and do not exercise any political or social roles afterwards..

Therefore, many researchers, politicians, and activists are discussing proposals to reform both the electoral law and the party system so that it enables the formation of large parties that represent the Iraqi electorate across all governorates. If Iraq had a small number of larger, cross-sectarian parties competing nationally in parliamentary elections, this could facilitate the formation of more effective, stronger, and more harmonious governments. It would also ensure a relatively large opposition that can monitor government performance without fear of the government intruding or bypassing the political minority.

On an April morning back in 2003, in a moment broadcast on television around the world, a group of Iraqi youth set out to tear down a statue of Saddam Hussein in Baghdad’s Alfirdos Square. Toppling the statue of the former Iraqi dictator seemed easy at first. But raising its feet from the base proved far more complicated, and in the end it required the intervention of military vehicles and the use of ropes — and only came after a great effort.

Will the revitalization of the political process also require complicated and dangerous surgery? Or will mistakes be corrected and reviewed before it is too late? We can only hope and pray it’s the latter.