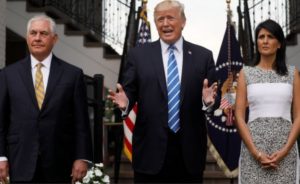 President Donald Trump has warned North Korea to expect “big, big trouble” if anything happens to the US territory of Guam.
Speaking at his Bedminister, New Jersey golf resort, he promised the territory would be “very safe, believe me”.
Mr Trump said the US could impose further sanctions, “as strong as they get”, on North Korea.
He later spoke to Chinese President Xi Jinping, who stressed the need for a peaceful resolution, Chinese TV said.
President Xi called on “relevant parties” to exercise restraint and avoid words and actions that would exacerbate tension, state TV reported, adding that it was in the interests of both China and the US to pursue the denuclearisation of the Korean peninsula.
The White House said both sides agreed North Korea must stop its “provocative and escalatory behaviour”.
“Hopefully, it will all work out,” Mr Trump said earlier, striking an upbeat tone after a day of rhetorical brinkmanship.
“Nobody loves a peaceful solution better than President Trump, that I can tell you.”
Trump administration’s mixed messages
Trump’s long nuclear obsession
North Korea’s neighbours consider risk of war
Earlier on Friday, the president said the US military was “locked and loaded” to deal with North Korea, should the need arise.
“Military solutions are now fully in place, locked and loaded, should North Korea act unwisely. Hopefully Kim Jong-un will find another path!” he tweeted.
He spoke as Pyongyang accused him of “driving” the Korean peninsula to the “brink of a nuclear war”.

North Korea has announced plans to fire missiles near the US territory of Guam.
Moscow said the exchange of threats between Washington and Pyongyang “worry us very much”.
Foreign Minister Sergei Lavrov rated the risk of military conflict as “very high” as he put forward a joint Russian-Chinese plan to defuse the crisis.
German Chancellor Angela Merkel said there was no military solution, and “an escalation of the rhetoric is the wrong answer.”

Asked about his “locked and loaded” tweet on Friday, Mr Trump told reporters: “I hope that they [North Korea] are going to fully understand the gravity of what I said, and what I said is what I mean… those words are very, very easy to understand.”
He added: “If he [Kim Jong-un] utters one threat in the form of an overt threat… with respect to Guam or anyplace else that’s an American territory or an American ally he will truly regret it and he will regret it fast.”
Who said it: Trump or Kim?
N Korea: The possible solutions
The K-pop concert seeking to broker peace
Earlier in the week, Mr Trump threatened to rain “fire and fury” on Pyongyang.
On Friday, North Korea’s official KCNA news agency accused Washington of a “criminal attempt to impose nuclear disaster upon the Korean nation”.
Pyongyang’s media outlet said America was making “desperate efforts” to test weapons in the Korean peninsula.
The US is “the mastermind of nuclear threat, the heinous nuclear war fanatic”, the report said.

Tensions have risen since North Korea tested two intercontinental ballistic missiles in July.
The North Korea crisis in 300 words
Can the US defend itself?
The regime was further angered by last week’s UN decision to increase economic sanctions against it.
North Korea said it was finalising a plan to fire medium-to-long-range rockets towards Guam, where US strategic bombers are based, along with more than 160,000 US citizens.
There has been no indication that any actual attack on the Pacific island is imminent.
On Thursday Mr Trump suggested that his own statements on North Korea had not been tough enough, warning the regime to be “very, very nervous”

However, he added that the US would always consider negotiations.
He also chided the North’s closest ally, China, saying it could do “a lot more”.
China’s state-run Global Times newspaper wrote that Beijing should stay neutral if North Korea launches an attack that threatens the US.
But it also said that if the US and South Korea attacked North Korea to force regime change, then China must intervene to prevent it.