The Iraqi economy suffers today from the great challenges represented in the high volume of the debt, and the payment of its dues and benefits, and the high deficit rate, and up to frightening figures, and economists emphasize that the reason is financial and administrative corruption and mismanagement of wealth, and these funds go into the pockets of parties to finance their activities instead of sustainable development.
The head of the parliamentary reform and reconstruction bloc, MP Sabah al-Saadi, said that the amount of money allocated in the federal public budgets for the past fifteen years is huge and frightening, and that the problem of Iraq is not in the money but in poor management, calling on the Anti-Corruption Council that starting point in these budgets be the trial of those who caused the waste and theft of the money, they were as follows: 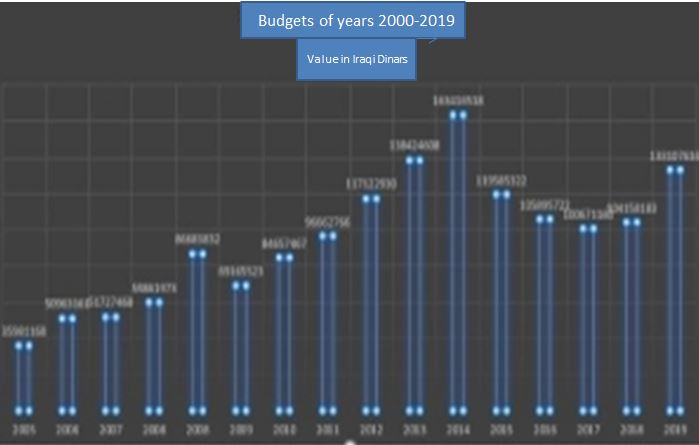 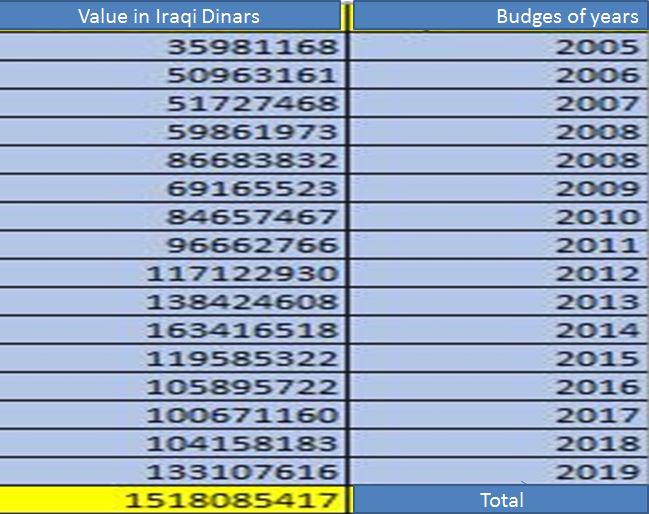 Tables (specific to the Rawabet center). The chart shows the allocations from 2005 to 2019.
From 2005 to this year, it reached (1,515,085,417) trillion Iraqi dinars, equivalent to nearly ($ 1.262,500 billion dollars), while the total investment budgets for the same years (419 trillion Iraqi dinars) »
The Ministry of Finance has started writing the final draft of the federal budget law for 2020, whose revenues were estimated at 139 trillion dinars, to calculate the sale price of crude oil at 53 US dollars. The law also includes paragraphs to pay foreign debts estimated at (20) billion dollars, and exacerbated the budget deficit exacerbated after it has exceeded the 72 trillion dinar barrier.
According to a member of the Finance Committee Jamal Cougar that “the federal budget for 2020 will allocate between $ 15 to $ 20 billion to pay the dues and benefits of external debt owed on the Iraqi state,” stressing that his committee “will put a paragraph in the new budget, which prevents the government from external borrowing.”
Because of the country’s fragile economy, which does not tolerate more external borrowing, which involves the risk of easing subsidies for the poor, raising the prices of oil derivatives, increasing taxes and others, the Parliamentary Finance added a clause in which the government was prevented from external borrowing, considering these types of borrowing as a risk on the future generations and threaten the existence of the state economy.

Debt accumulation:
As a result of the rampant corruption in the institutions of the Iraqi state, Iraq’s foreign debts have accumulated in recent years on the one hand, and the previous governments resorted to the policy of external borrowing which has increased their deficit, on the other.
Economists assert that the foreign debt currently – according to the International Monetary Fund – $ 85.3 billion, and includes the dues of foreign companies working in the energy sector and the purchase of electricity and gas from Iran, while the internal debt is $ 40 billion, mostly to the Central Bank and the three government banks (Rafidain and Rashid and Iraqi Trade ,and the National Retirement Authority).
Iraq today owes the Gulf States an amount of approximately $ 41 billion borrowed by the former political regime, in addition to the debt of the Paris Club countries amounting to $ 9 billion, and Iraqi debt approached the level of the red line to reach 55% of GDP.
Debts are described as “repugnant” The Iraqi state can not “continue on this policy to get rid of the interest of these loans,” and it has become a burden on Iraq without solutions to the problem, “and Iraq needs thirty years to pay it by the government, which will be subject Iraq’s oil capabilities for many years under the mortgage of banks and creditor countries.

The amount of Iraqi indebtedness is very large, and part of it went into the pockets of corrupt and some political parties, through mock projects in the absence of transparency since 2003, as Iraq has become described as one of the most corrupt countries in the world, ranking 161 out of 168 countries in the classification of corruption, and that the high rate of corruption in it has become a reason for the waste of resources and wealth and the lack of utilization and investment.

Corruption fosters budget deficit:
The size of the federal budget for 2020 is estimated at 139 trillion dinars, calculated at the price of a barrel of oil sale of $ 53, but “these figures are preliminary and will be subject to reduction or increase depending on variables.” The two governments , Federal and the Kurdistan region are working through technical committees to settle all controversial issues related to the export of oil and payment of financial dues for inclusion in the 2020 Budget Law.
The MP for the State of Law coalition (Dawlat al-Qanoon) Abdul Hadi Saadawi said , that “meetings are still going on between the departments of the Ministry of Finance to reduce the federal budget deficit for the next year below 72 trillion dinars,” adding that “there is a large speculative costs sent by ministries and provinces to be included in the budget law.”
Al Saadawi adds: “If all these estimates are taken without amendments by the departments of the Ministry of Finance, will lead to a large deficit in the budget next year,” adding that “it is necessary to have an obligation by the Ministry of Finance to local governments and the Kurdistan region to include all internal revenues in the budget ”.
A parliamentary source said last July the reasons for the growing deficit in the budget of next year are to add (30) thousand elements to the Popular Mobilization Forces and inclusion of contracts, daily wages in all ministries, and the return of those dismissed to the security services.
The deputy of the Parliamentary Finance Committee Ikhlas al-Dulaimi said , that there are debts spent, and the country is obliged to pay its dues and benefits, “These funds did not go for development, but to the pockets of corrupt.”
“The rate of loans in each budget after 2003 is between 20 and 25% of the total budget, because of the failed economic policies of previous governments that are preparing economic plans indiscriminately not based on economists, but on parties and businessmen loyal to them, and tampering with the country’s capabilities through militias ,” Dulaimi said..
Economists also stressed that the problem of Iraq is the absence of control over debt, which made many international organizations refuse to lend directly, but through the support of service projects supervised by them , for fear of financial and administrative corruption.
Bassem Jameel Antoine, Vice President of the Iraqi Economists Association, said, “The problem of Iraq is the weak control, the money that entered the country is estimated at $ 1 trillion in oil since 2003 and it is capable of building the country and not borrowing from any external or internal parties.”
He added, that the problem that accompanied the Iraqi debt is financial and administrative corruption, and part of this debt went to support the financial budget in filling the salaries of employees and public expenditures and others, while there are stalled projects financed from public debt funds, and that the Iraqi generations are owed by large amounts, and that Governments were supposed to think about building a good future for these generations through sustainable development.
We do not forget the most important problem in the Iraqi economy, which is poor planning and management of state funds and the rentier Iraqi economy: It is known that Iraq is governed by the rentier dynamics, which necessitates the deepening of the rentier dependence, which is inevitable only by demolishing the basis that the rentier economy depends on with its four components:
1. The main income of the economy from oil exports.
2. Added Value and local manpower constitute only a small percentage of the total value of oil exports.
3. Oil revenues come from abroad and nothing from domestic investment.
4. Poor planning and investment of rentier income, it goes to the government and often for consumer outlets or financial and administrative corruption, the “theft.”
The Iraqi situation is witnessing chaos or so-called “democracy” and is racing for the acquisition of rentier , in addition to financial and administrative corruption rampant in all rentier countries, which reached its peak in Iraq.